Well, you know you must be doing something right if you have released five different versions of a title. Granted, sometimes a fifth of something isn’t always a good thing

(Think Rocky 5 or anything after SAW 2 ). But in the Silent Hunter game series each title has continued to improve on the previous version to create a unique experience for gamers that really hasn’t been matched by any other game title.

For 2010, Ubisoft plans to release the fifth version in the installation. Silent Hunter 5: The Battle of the Atlantic revisits the theatre first visited in Silent Hunter II and Silent Hunter III. While this may seem like a rehash, there are some significant differences to this title that make it appealing to the virtual submariner. I have had the pleasure to put in about ten hours with the title and look forward to putting more time in after the game is released.

Past versions of Silent Hunter gave the opportunity for the gamer to man several different types of U-boats; ranging from the very short range Type II series to the high tech Type XXI series boats. In Silent Hunter 5 the developers decided to dedicate themselves to only one type of boat, the Type VII series of warships. These ships were the only real offensive submarine the Germans had in 1939 and soldiered on well into 1945.

The decision to not (at least initially) model the Type IX and later models (to include the XXI) will probably be looked upon as a negative by some in the community but once you start moving around in the submarines you will start to get an understanding as to why only the VII was initially created. Who knows, if the game sells well there might very well be additional types put into service using this engine.

The other decision that was made was to have the war conclude in 1943 as opposed to spanning the entire war. I am not totally sure that I agree with this idea since the Type VII U-Boat did continue to serve for the entire war although most were replaced by longer range Type IX boats. Personally I could have seen the boats continue on until 1944 when the channel ports were rendered non useable by the Allies. It could be that there is a plan for an add on that creates the opportunity to use a later type from 1943 to 1945 but that is complete speculation on my part.

I suppose this is as good a place as any to bring up Ubisoft’s new Digital Rights Management System titled UPlay, their new DRM that requires a fulltime Internet connection. Ubisoft has announced that UPlay will be included in all of its future releases starting withAssassins Creed II and would include Silent Hunter 5 . There is a large and quite vocal group of naval combat fans in the Subsim Forums that has stated point-blank they will not purchase the sim if it has Ubisoft’s UPlay Services included.

This is my opinion on this controversial topic. I am not a fan of Ubisoft’s UPlay Service as it is currently provided. It isn’t a deal killer for me, but it can be a decision maker if I am on the fence concerning the purchase of a piece of software. DRM software should make it difficult for hackers to copy and use the game, but it should be as minimally intrusive as possible for the purchaser of the software. Any DRM that prevents legitimate users from playing the game is a bad piece of software. It has to be remembered that it isn’t the hackers that pay the salaries of the executives in charge — it is the legitimate buyers of the game. Alienate them enough and there will fewer purchases. There are ways to check for legitimate users without resorting to such methods. Just look at what StormEagle Studios did with their DRM protection software. It isn’t perfect, but in my opinion it does what it should do — allow legitimate game owners to play without constantly needing to be connected to the Internet.

What do you think? Discuss it further in this SimHQ Forum thread.

Possibly the First True Submarine Simulation Ever Made?

I know that the original Silent Hunter through Silent Hunter 4 have been classified as submarine simulations, but Silent Hunter 5 has raised the genre another level and is really approaching the true simulation standard. In the past you could just jump from station-to-station in the game. While that was understandable considering the limitations of previous game engines, it was a detraction from total immersion. Being able to instantly fly through a submarine was unrealistic, but until now there really wasn’t much of an alternative.

Silent Hunter 5 has finally brought something that most of us virtual submariners have been looking for — a true, fully rendered submarine interior. Silent Hunter 5 utilizes the entire submarine from stem-to-stern allowing you to actually see all the compartments. It also means that you can’t just teleport from one section of the sub to another. Keyboard commands are much more limited than inSilent Hunter 3 and Silent Hunter 4. You are the captain of the boat and in the game you should walk around and interact with the crew. It also means you might have to run, and I mean run, back to the bridge to take a look through the periscope or to give orders. 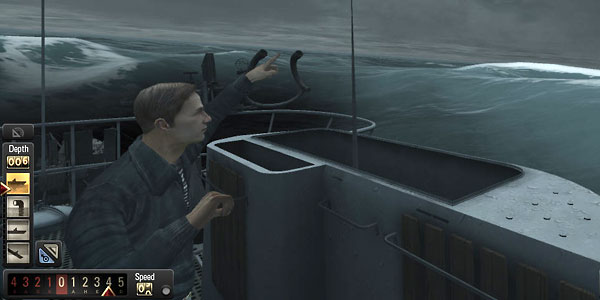 The crew will interact and will do various things depending on what job is necessary at the time. Take a look at this video from Subsimthat demonstrates the reloading of the forward torpedo tube as represented in the game. While the reloading looked more to me like an instructional video to new U-boat crews than a real life reload under combat situations, it was still by far the most realistic looking depiction yet created for a submarine simulation.

Compartments look great and the detail is even better than Silent Hunter 4. While it is impossible to truly create the claustrophobic conditions that submarine crews had to endure (I have been aboard the U505 and U.S.S. Pampanito) this is about as close as you can get without dragging your computer into a small room. 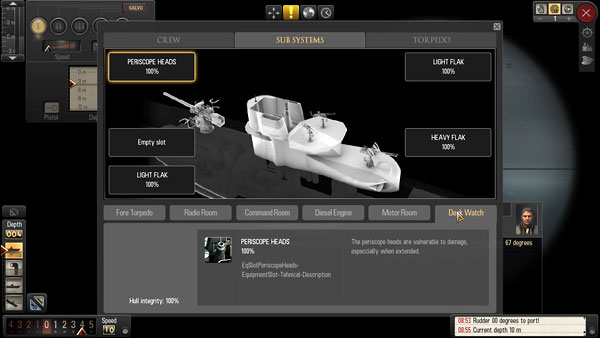 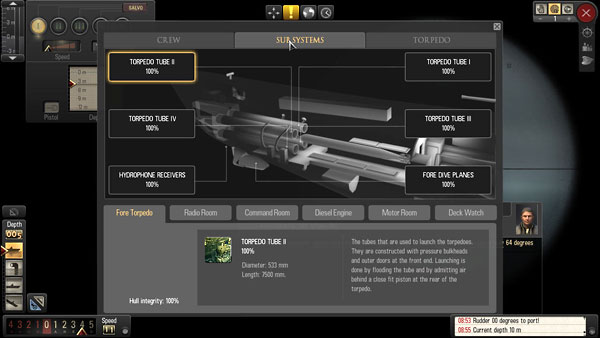 Simple things like clicking on a crew member and asking them about their day-to-day life or giving them encouragement results in improved morale for that crew member. I suspect ignoring this probably will lead to resentment and poor performance. It looks like taking the crew for granted will not be part of this game. Crew management and interaction is a very important element in Silent Hunter 5.