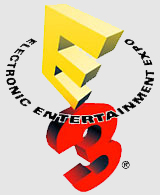 We spent quite some time with CodeMasters as they were showing a few couple of excellent games in development. First off is IndyCar Series which looked quite good. There was only a keyboard available with the game (no wheel and pedals…argh!) but the graphics looked fabulous. Physics is something we wanted to learn more about but the CodeMasters booth was full so getting in questions was difficult. We got a few pictures of the booth and plan to do an interview soon to get our additional questions answered.

The Indy Racing League is a 15 Race Single Seat Championship that competes on oval racing circuits throughout the USA. Circuits include Las Vegas, Texas Motor Speedway, California Speedway and, of course Indianapolis, which is the biggest race on Earth and the highlight of the racing calendar. 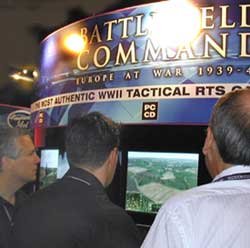 The second sim showing in the CodeMasters booth was Battlefield Command, Europe at War 1935-1945. Yes, this is the game being developed by 1c. It looked fabulous!!! The graphics are so far beyond any real-time strategy sim we ever seen it was mesmerizing. The sim is clearly right out of the book of Close Combat. Imagine Close Combat 5 rebuilt with your wish list of options, in incredible 3D graphics… so imagine those graphics in a real time strategy game) and very good AI. The game is 1 year away at this point and is schedules for a Spring 2004 release.

Particularly amazing was the system it was running on. There was a small amount of chopping going on as detail levels got very close but the game was being shown running a GF4 Ti4200. Given that we are 1 year away and there is little optimizing being done, the idea that a Ti4200 was running it pretty well was reassuring. Not sure what the CPU/Memory configuration was on the test machine but would guess it to be mid 2GHz class.

Here’s the game overview from the press CD: Take command of a wide range of military units in some of WWII’s most significant battles in this groundbreaking Tactical RTS. The game’s epic visual style redefines the standard for real-time strategy titles; whilst the outcome of the player’s commands are experienced through depth of detail and stunning cutting edge graphics. An incredibly detailed game, Battlefield Command, will cover WWII’s major European battles from the invasion of Poland and France in 1939-40, through the war on the Eastern front, and the fall of Germany in 1945. Taking players closer than they will ever have been before to the grueling tactical experience of a WW2 Commander. Battlefield Command is designed to capture the cunning, passion and realism of being responsible for a combined tactical force in some of histories most dramatic and intense battles.

And the key features: Play as a Commander from one of the eight Allied/Axis armies in over 100 historically realistic missions across 33 locations. Using a revolutionary 3D graphics engine, Battlefield Command has the most realistic visuals ever seen in a Tactical-RTS. Every mission is based on historical events, in real locations reconstructed using topographical maps, aerial and period photography. Over 320 unique vehicles, planes and weapons of war have been recreated from military blue prints, reference and technical data. Each solider has 36 personal and combat attributes that develop through missions, building an attachment between the player and his men, creating a more emotionally intimate and in-depth experience. Garrison buildings, capture enemy weapons, utilize terrain advantages and see the real star constellations in the sky in the most detailed T-RTS ever. 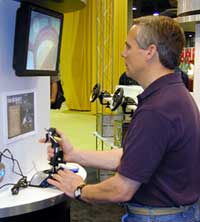 We were impressed with their new sticks and wheels. We worked out the logistics of acquiring review units and plan to get some Saitek products back on the web site. Hornit was kind enough to offer to do the new flight sticks and our Motorsports Editor, Doug “guod” Atkinson, is going to be doing the racing products. Saitek has three (3) new flight sticks for 2003. The wheel and pedals have been reworked to include variable force feedback. Expect to see more from Saitek on the site in the coming weeks.

While there were no new motorsport sim announcements from the terrificPapyrus team, we did find out that anything the Papyrus team will do will definitely include the PC platform among other platforms. We also learned they have narrowed down to 3 different possible projects and should announce their next project within a couple of months. It’s clear that Sierra realizes what excellence they have in the Papyrus group and plan to support their next endeavor. We’ll report more as it becomes available but from what we learned, it dispels some concerning rumors.

We met with AMD at the NVIDIA booth and had to move to another area due to space constrictions. We spent some quality time with one of our favorite AMD employees. We will just call her Linda K. to protect her anonymity but if you’re in Austin and see an attractive female AMD employee driving a stick shift BMW 330Ci, you found her! Be sure and get an autograph!

We talked about 64-bit processing at length as Opteron has launched and Athlon-64 is expected in September. “Hornit” and “guod” had a flurry of questions for Linda and she patiently answered them all. One of the more interesting was asked by “guod” where we learned that all games (32 or 64 bit) should get a ~ 25% speed increase just due to the integrated memory controller. Athlon-64 should be quite a part as we are expecting to see first samples weeks from now. In the meantime, “Barton” has just launched at 3200+ and we may well see another iteration of Athlon XP before 64-bit “Clawhammer” makes his appearance.

We have three screens (okayed by AMD) titled:

ATI and VisionTek
by Bubba Wolford

This section I need to start this section with a bit of a caveat…I was consulting with VisionTek for the show this year to facilitate press briefings. I’m under NDA with ATI and VisionTek for a number of reasons so I am just going to present the information here as is and just mention the facts.

ATI was showing off the exclusive of Half Life 2. Last year they were showing off Doom III which I did not see but I was able to make in into the Half Life 2 25-minute showing and I must tell you that I never played Half Life but I will be playing Half Life 2. This game blows away every other FPS shooter I have ever seen. I was blown away by the demonstration of the game. The only was to describe the game is to see it. Believe me, I have seen many, many demos in my time but this one was virtually sensory overload.

ATI was showing off their new Radeon 9800 PRO 256MB on several machines running new games in their booth. NDA’s for the board lifted last Monday along with the NDA for NVIDIA’s new GeForceFX 5900 ULTRA. I had a long meeting with ATI about several issues and the good news is that there are more and more options coming out for the consumer all the time. The 3D wars are in full swing but ATI is hinting towards more swings at the plate already. It could get hot again soon.

I was giving the press briefings for VisionTek so I am familiar with what is going on with them, given that I wrote the presentation myself! The XTASY 9800 PRO 256MB has already shipped and as ATI’s Premium Retail Partner, they were first to market. This launch compliments the XTASY 9800 PRO 128MB card that is on shelves now in CompUSA, Fry’s among several other e-tailers and retailers.

50% of all VisionTek SKUs will be SKUs that are not being offered by ATI so they have some differentiation from ATI on the shelves. By far the most interesting SKU from VisionTek was a XTASY Radeon 9600 card with 256MB of memory for a retail price of $199. Also coming from VisionTek is a 9600 PRO 128MB as the XTASY 9500 PRO is going to be phased out over the next 3 months.

One feature that I pointed out in my press meetings was the lifetime warranty being offered by VisionTek, which compliments toll-free tech support and a registration only 24/7 moderated Q&A forum. ATI is offering a 3-year warranty and tech support. VisionTek cards also ship with Powerstrip for those numerous overclockers.

A preview from our next report 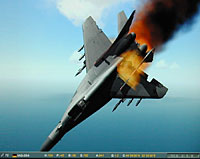 Anyway, we have an appointment with them today but we thought you might just like a little preview of what is to come so here we go…

We will also tell you that the game was running on an AMD development machine. The CPU was a Athlon XP 2800+ with 1GB of RAM. Video was being provided by a GeForce 4 Ti4600. As always, graphics were breathtaking. Screenshots just don’t show how impressive it looks.

Three Days of E3: The 2003 E3 Expo
An Interview with Intel’s George Alfs