ATI announced their new chip this March and not too long thereafter various board vendors began shipping products based on it branded as Radeon 9800s. VisionTek is one such vendor. A company quite well known in the retail market for their graphics boards, VisionTek is now operating as a subsidiary of the Hartford Computer Group offering boards based only on ATI chips. In fact, VisionTek no longer owns production facilities for manufacturing their own boards, instead buying them directly from ATI or Asian companies and repacking them under the company’s Xtasy brand. VisionTek’s web site can be found at www.visiontek.com and the company can be reached at 1-866-883-5411 for technical support (or e-mailed at support@visiontek.com). 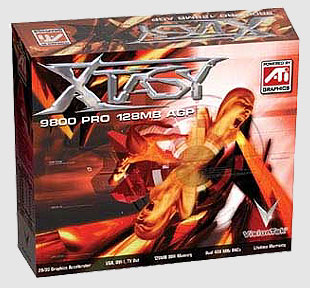 The Box and Its Contents

Add-In-Board (AIB) vendors such as VisionTek often search for unique ways of differentiating products that are based on reference designs, and the company has certainly done that with its packaging of the Xtasy 9800 Pro. Made of clear, though fairly thick, plastic, the Xtasy box is certainly different from the standard cardboard packaging by displaying its contents without the box being opened, contents that consists of the following:

The driver install CD also has the ATI control panel and Hydravision software, and various ATI demos. No additional software, such as a game bundle, was included in the packaging, something that is becoming more common with the smaller margins afforded to AIBs by high-end graphics boards.

The Xtasy Board and ATI’s Radeon 9800 Chip

As for the Xtasy 9800 Pro card itself, its specifications can be seen below:

Installation of the card was the usual ritual of seating an expansion board into the motherboard’s AGP slot and connecting the power cable; failure to perform this last part will result in the motherboard refusing to POST. Once the system boots and drivers are in place, installation is complete. Worth noting is that the Catalyst driver suite is often updated by ATI and can be found here for download. The Catalyst drivers themselves offer a wealth of options for user tweaks that are well organized and easily understood.

As mentioned above, ATI’s reference design for Radeon 9800-based boards now uses a more sturdy molex power connector rather than a floppy drive one, which Radeon 9700 boards use.

A basic run-down on the Radeon 9800 chip specifications consists of the following: 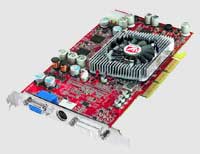 Worth noting is that while the Radeon 9800 chip clock speed is not a massive increase over that of its predecessor, the Radeon 9700’s clock rate of 325 MHz, ATI has still managed to remain fairly competitive with the rest of the market even though they are not yet using TSMC’s newer, more advanced, .13 process for these high-end products. This is even more impressive when you consider that this allows ATI’s AIB partners to use standard heatsink and fan cooling for their boards rather than more exotic, and expensive, solutions.

The Radeon 9800 chip is an amazing piece of engineering, with a rather lengthy features list:

The most significant addition to the Radeon 9800’s features compared to those of the Radeon 9700 is that of the F-buffer. Radeon 9700-class boards can manage up to 96 pixel shader instruction lengths in a single pass; exceed that number and the chip is thereby forced into multi-passing, which obviously hurts performance since each additional pass requires scene geometry setup and clock cycles. The F-buffer technology is an attempt to avoid this situation by creating a separate memory space wherein only those pixels that are exceeding the hardware’s limits are temporarily stored for multi-pass operations. Theoretically this should save on both bandwidth and fill rate. ATI supports F-buffer in OpenGL with the Cat 3.4s. D3D support is as yet unannounced. This is hardly cause for concern since no game, available now or near shipping, has been developed with shader instruction lengths that exceed ATI’s hardware limits. This could of course change sometime in the future.