Not only is AMD launching a new CPU, but an entirely new architecture with numerous enhancements and advancements that AMD hopes, will bring the new 64-bit “Hammer” line of processors to the top of the mountain. They have been fighting Intel tooth and nail and with this new architecture now out and ready for sale, AMD is hoping to recapture the performance crown that has eluded them in recent months.

“Hammer” is AMD most anticipated CPU since before the “Athlon” line of processors was introduced and we were all still playing with Pentium II’s or K6-2 and K6-3. You might have noticed that we have quite a name change going on here as the “XP” nomenclature has been seemingly dropped. AMD is keeping their PR scheme but will instead indicate a middle tier of processors, as the “FX” line will now take over the high-end in AMD’s line of CPUs.

First off, AMD is keeping with the very popular “Athlon” name. Some suspected we might see an Athlon2 but in the end, AMD wanted something with a little more familiarity and bang so Athlon2 became less popular. 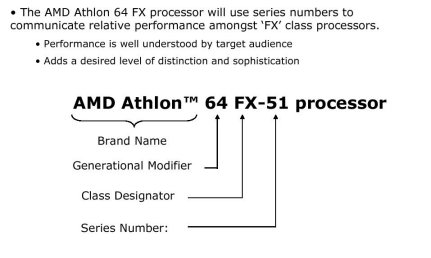 The number “64” comes from the fact that AMD is first to introduce a 64-bit processor. Why is 64-bit important? The easiest analogy might be to visualize a sports stadium. Imagine 75,000 people enjoying a sporting event when suddenly the game ends and all are looking to exit the stadium. Now imagine the congestion difference between 75,000 people exiting through 32 doors compared to those exiting between 64 doors. In effect, 64-bit doubles the bandwidth of the computer and allows a great deal more freedom in memory configurations and speed. The catch is that the hardware (CPU), OS (Operating System) and software applications (games, other apps) must all be designed for 64-bit for the system to take full advantage of 64-bit computing.

The most common scenario is that you have a 64-bit CPU and OS running 32-bit applications and games. If you are not running a 64-bit CPU, your not going to be able run a 64-bit OS for any measure.

The “FX” name should signify a sort of power computing. This name was obviously included to piggyback on the “FX” from NVIDIA. Not a bad move but NVIDIA’s FX line has been their most tumultuous line of GPUs to date but nonetheless the “FX” name seems very catchy and should prove popular with high-end gamers.

Finally, the “51” name reminds me of Alienware. That name is synonymous with high-end gaming to me. AMD has really loaded their naming scheme with some names that bring to mind “high-end”, “powerful” and brute speed. Kudos to AMD marketing for piecing that name together.

Now let’s talk about the major changes that come with this new CPU from AMD. There are three major improvements AMD sought to include with Athlon 64.

HyperTransport is a a very efficient means of communication between devices in the PC. This is one of those subjects that can get very technical very quickly and I don’t want to get out of range here so I want to purposefully be quick- but accurate. For those of you who might be interested, here is the equation for how to calculate the bandwidth for HyperTransport: 1600MHz Link (800MHz x2 w/ DDR) x 16-bit link (2-bytes) x 2 (bi-directional) = 6.4GB/s max throughput. As AMD would say, “…HyperTransport technology is an intelligent technology, capable of dynamically synchronizing with other connected HyperTransport technology-based system components to operate at the lowest common denominator between the two devices.” Further, it is very high speed and low latency between Input/Output devices (I/O). For more specific information on HyperTransport, visit the web site.

We have talked many times about the importance of on-die cache. It’s memory for the CPU that allows the CPU to feed itself information at the full speed of the processor. The more cache your CPU has, the more speed and FPS you should see (theoretically).

This is perhaps the most anticipated part of “Hammer” as the advantages of an integrated memory controller are vast. Most noticeably, since it is integrated in the CPU, there is no time lost while transferring memory writes and reads information back and forth and between chipsets. It has been rumored that this feature alone could account for a 10-25% increase in performance. Non-FX products will be using a 64-bit Integrated Memory Controller.

Finally, the Athlon FX-51 processor reviewed today comes at 2.20GHz with 1 MB L2 cache. The FX version of the Athlon 64 uses Registered memory. Non-FX versions use unregistered memory. Athlon 64 comes in .13-micron with a 940-pin ceramic micro pin array for the FX and a 754-pin organic micro pin array for the Athlon 64 (Non FX). Transistor count is now over 100 million at 105 million. The 1MB of cache is expensive on processor die. AMD now has over 1.1MB of total on-die cache, which is the most of any desktop processor ever.

Along with our system, AMD and Microsoft were kind enough to send along a copy of 64-bit Windows for our testing purposes. It’s not every day we get a chance to play a completely new system, which comes with a OS essentially designed just for what this processor does best, run 64-bit applications. AMD’s biggest issue is that they need Microsoft to have as much passion about 64-bit computing as they do. AMD needs Microsoft to pour resources into 64-bit Windows and get it up and running. Along with the OS, needs 64-bit applications, which is whole other beast. AMD’s ultimate success with Athlon 64 could hinge on how fast adoption of 64-bit computing comes from outside of AMD’s offices.

We do know that our version of Windows XP 64-bit was a true beta. Its launch date has been unannounced and while it was very crisp, we expected to have issues with its operation. That is in effect what beta truly means. Not ready for primetime but certainly functional.

Kingston is in the fun too 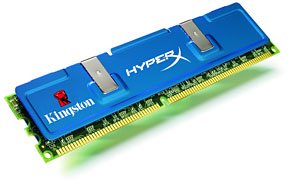 With today’s big news, Kingston is also announcing they are producing registered PC3200 DIMMs to be used with AMD’s new Athlon 64 processor. We are glad to see Kingston onboard. They have been a big supporter of SimHQ and we will be testing their new DIMMs in our system starting this week. Read more about Kingston’s new PC3200 memory at their website.

Enough with the chit chat, let’s get on with the benchmarks! The true power of Athlon 64 is in the performance.

FRAPS 1.9d used for most benchmarks and all Direct3D benchmarks. Frame rates are an estimate of performance since none of these games have an exact frame rate utility.

While looking over the scores, pay particular attention to the “bullet” scores, as these are the numbers that are run from the CPU alone. The detail on the games is essentially turned off and the CPU draws as many frames as possible without the help of the video card. You can see that AMD hold a tremendous advantage in most games here when the scores are isolated on the CPU. Look at Ghost Recon and you can see that AMD holds a 33% advantage over the 3.2GHz P4. That is tremendous! Falcon 4.0 and IL2 also show a very large advantage for the FX.
The synthetic scores speak for themselves. They are impressive!

You will notice that 64-bit Windows did not run most of the games and some apps. There is no DX9 for WinXP 64 yet so benchmarks like 3DMark03 can’t run. The errors are likely just a maturing issue for the OS. No reason to doubt the hardware what do ever. Clearly when WinXP 64 is ready for prime time, the backwards compatibility will be there for some 32-bit apps to work just fine. We understood in testing there would be problems and surprisingly, even FS 2002 would not run but the older Falcon 4.0 ran just fine!

As we get closer to seeing WinXP 64 “done” I expect all these games and benchmarks will work just fine. When that will be is anyone’s guess however.

AMD has done it, they got Athlon 64 out the door and its performance is very strong. Performance of Athlon 64 FX-51 has re-established AMD as the power processor on the market. With the integrated memory controller and 1MB L2 cache, AMD was able to brute force past Intel’s best CPU.

We would have like to see AMD introduced a CPU that was over 2.20GHz but we won’t quibble over small details when the performance of the unit was so strong overall.

The success of 64-bit computing will ultimately depend on the adoption of applications that take advantage of 64-bit Windows. Can AMD convince Microsoft that 64-bit computing is here and now? Like we stated earlier, AMD needs Microsoft to push 64-bit hard and fast. Will Microsoft pour resources into moving the industry to 64-bit on the software side?

We do know that the hardware is ready and that is great news! Bring on the 64-bit games!