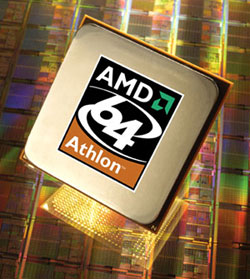 As you can see in the chart above, there are few other differences between the FX-51 and A64. The biggest physical difference is a major issue if your looking for a new machine, The FX-51 and A64 use different socket sizes. They are not pin compatible. Both CPUs take advantage of 1MB of L2 cache. They share the same die size and both support the same 3D instructions, including SSE2.

A new feature added to the 3XXX series is what AMD calls “Cool’ n ‘Quiet”. When your desktop CPU is up and running, it runs at full speed 100% of the time. It does not matter if you’re playing LOMAC or typing a review in Microsoft Word, the CPU is always throttled up to maximum. On mobile CPUs, the chips will scale up and down as per use. If you’re watching a DVD or typing in Microsoft Word, the CPU might only be running at 50% utilization. If you switch off the DVD and start a game, the CPU recognizes (instantaneously) that there are more demands being made and it throttles up to 100%.

AMD has taken those same features and implemented them on a desktop CPU. When your CPU needs to be at full speed, it will operate at (in this case) 2.20GHz. If your typing in Microsoft Word and your CPU has decided to throttle down (say to 1GHz) two things happen.

You’re not producing as much heat. Your system runs cooler and keeps lockups from occurring. Now your fan will also slow down to create less noise because less heat is being generated from a CPU that is operating at a lower CPU speed.