Well, to say I “really liked” the TrackIR2 would be an understatement. Some early bugs aside, the device installed without a problem, tracked well, and after learning how to use the device, proved an advantage in virtual combat. The ability to follow that bandit without stumbling through hat keys or losing orientation with a padlock key has proven to be more of an advantage than I thought it would be.

In the past there has been some debate as to whether having a TrackIR is considered a ‘cheater’ device in some games — especially online. I will say this — the TrackIR improves situational awareness immensely in most combat flight simulators. It is a significant advantage in most games, especially if you are flying online against an enemy without a similar device. It won’t overcome poor flying, bad technique or rotten gunnery, but itwill improve your situational awareness and in most games, it makes you feel like you really are in the game.

Right now, the TrackIR2 is still in it’s early stages. Yes, this is the second version of the hardware and yes, it has been around for a while… but I really do foresee a future for the device. I wonder when first person shooters will fully embrace the device (some have — Operation Flashpoint has support). I may write a supplement to this review in the future using this device with some of the more popular FPS games.

So my conclusions? If you are a rabid IL2:FB flier, then I highly recommend the TrackIR2. I sometimes wonder if the TrackIR2 wasn’t designed especially for IL2:FB. I can’t imagine flying IL2:Forgetten Battles without the TrackIR2 to be honest. It really makes me wish I had bought the device much earlier.

LOMAC and IL2 have my recommendation with few qualms. I don’t have anything against IL2 and the TrackIR. I rarely hear anything negative about the device and the game, and I can’t apply anything bad to the title either. LOMAC works well enough. Certainly worth the purchase IMHO, but at the same time I really would like to tone down the speed of panning in enhanced mode. Some folks may like it, and as I said, others have profiles which help… but it is still too fast to me. It actually runs better in mouse emulation mode, so you lose very little with this mode.

With AHII it is too early to be honest. The panning ability in the cockpit works fairly well right now, but the ability to support enhanced mode is really needed to make the game perform. If and when HiTech Creations supports enhanced mode in Aces High II you will see a rabid following created for the TrackIR2 system IMHO. Online fliers are always looking for that ‘little edge’ in virtual combat and the TrackIR2 will definitely give them that. 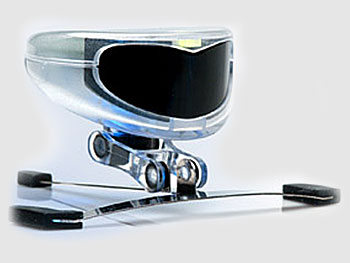 FS2004 is a good game for the TrackIR2, but it doesn’t give the same advantage like you see in combat sims. If you want to improve your immersion in the game, it won’t hurt though, and for those of us that play other games it certainly makes the experience more fun.

So overall I highly recommend the TrackIR2 system for those virtual fliers that desire an advantage over their enemies, both real and computerized. The price of 120 bucks may seem steep to some folks, but when you consider the money many of us spend on joysticks, pedals, throttles, video card upgrades and such, most of us will probably figure out a way to convince our wife of the need for such an important device. And if we can’t, rest assured it is worth the chewing out you will receive when the VISA bill arrives.