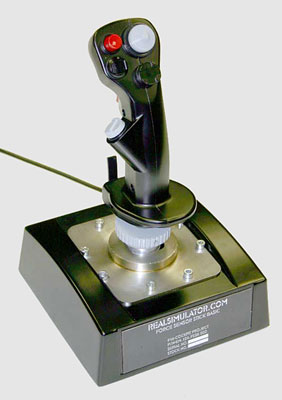 desktop flight simulation experience.RealSimulator have modified a standard Thrustmaster HOTAS Cougar joystick to use force transducers instead of potentiometers. As a result this F-16 like control should now feel more F-16-like to complement the already high fidelity appearance. In the real jet, the control stick only moves a fraction of an inch when the pilot pushes on it; the RealSimulator modification promises to replicate that experience for desktop F-16 pilots.

While we haven’t had a chance to get our hands on this one, judging by the exquisite engineering job these guys did on the F-16 rudder pedal set (which we have tried out), we have high hopes for this one as well. There are two versions available — the FSSB High Quality R1 for 240 Euros and the FSSB Supreme R2 for 360 Euros. A desktop throttle upgrade is coming soon along with a do-it-yourself modification kit allowing your joystick to be modified to the new standard. While not a cheap upgrade, for the wannabe F-16 pilot with a disposable income, this looks like it might be very interesting.

Also, the Viperpit folks are working on an “SSC” (side stick controller) project that will be even more like the real thing (i.e. sized to fit in a real cockpit hardware set up) and they are planning to give away the plans.

Then there’s the FFC project that’s discussed on Frugal’s Cougar World Forum. That’s another mod to the standard Cougar unit to place force sensors instead of the pots.

It looks like there’s some interesting new developments ahead for the high-end desktop flight simulation controller market.