Gainward claims their Golden Sample products will outperform cards from other AIBs that adhere to reference clock speeds, yet overclocking the review board sample wasn’t a practical option. Rather than use the CoolBits registry tweak to enable overclocking via the driver control panel, Gainward’s EXPERTool utility was instead used, though with mixed results. The clock speeds were changed from 325/350 to 350/400 and IL-2: FB – Aces’ Black Death track was used to evaluate performance differences. At 1024×768 the frame rate improved from 54 to 59 yet the sky textures began showing corruption about 30-40 seconds into the track. Further tweaking of the core and memory speeds resolved this and the board was stable at 350/375, though the performance gains were negligible at these clock settings. It is important to note, however, that these results could very well be indicative of just one board and not the entire Ultra/2100 line. Testing was conducted in a well-ventilated Antec Sonata case. 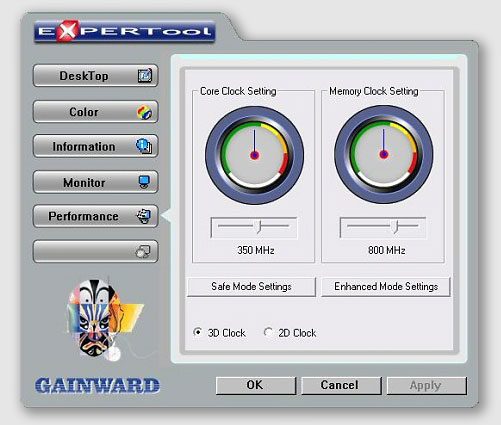 Here are some screenshots taken with the test Gainward card. Click on a thumbnail image below to download the original 2.25 MB bmp screenshot in 1024×768 resolution.

For simulation gamers who’re looking for an affordable card and don’t have their hearts set on playing at high resolutions with features such as anti-aliasing or higher levels of anisotropic filtering enabled, Gainward’s Ultra/2100 is a stable, feature-rich board that offers good performance at moderate resolution and settings. Based on the 6800 chip, the Ultra/2100 might also give owners a little added longevity with its Shader Model 3.0 support, though whether or not the chip itself will be able to play shader-intensive titles remains to be seen; the board certainly handles Far Cry very well at 1024×768, though the number and instruction length of shaders used within the title will most likely pale in comparison to those in future game engines currently in development. Yet for current simulation titles, the Ultra/2100 is a solid, middle-of-the-road offering.