The online gaming and hardware communities have a rather strong preoccupation with performance, a focus that emphasizes the high-end of product markets. Thus attention is predominantly given to the more expensive parts that attain the highest scores, that push existing systems to new levels of performance. Boutique vendors such as Falcon Northwest and Alienware cater almost exclusively to this market; larger OEMs like Dell, however, do not necessarily share that perspective, and instead give greater consideration to products that belong to the mainstream market. ATI’s new Radeon X700 graphics chips are intended to address this section of the market and today SimHQ will be looking at the X700 XT. While the X700 board range is priced from $149 to $249, the X700 XT 128 MB MSRPs for $199, a price tag that targets the more casual buyer of discrete add-in boards.

Based on the R420 architecture, the X700s (R410) are 120m transistor parts manufactured using TSMC’s 110nm process. Die size plays a key role in manufacturing costs, and as chips designed for the mainstream segment the X700s lowered their transistor count down below that of the faster X800s primarily by reducing the number of pixel pipelines from 16 to 8. Likewise the memory interface has also been shrunk from 256- to 128-bits, though ATI’s specifications of using fast GDDR3 RAM for the XT boards somewhat ameliorates the obvious impact the smaller interface has on memory bandwidth. A quick look at the X700 board lineup reads as follows: 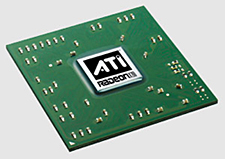 The X700 XTs ship with core clock speeds set very closely to those of the X800 boards, giving them a greater pixel fill-rate than last year’s high-end graphics cards. Worth noting is that while the X700s have significantly lower fill-rates compared to the X800 boards, ATI has chosen to retain the same vertex engine setup for the X700s as the faster parts. In the past mainstream chips generally boasted two vertex shader units, and even last year’s flagship 9700/9800 chips possessed only four vertex units, so the inclusion of all six is certainly an interesting decision since one could’ve reasonably expected to see this section of the architecture likewise halved. Also noteworthy is that the X700 boards are PCI Express only products; ATI is keen on addressing the mainstream market with these boards, which is already orientating itself rather quickly to the new bus. SimHQ suspects this decision could be a foreshadowing of things to come for future, next generation graphics boards, even the high-end cards, though only time will tell if this suspicion bears fruit. The review board ATI sent SimHQ is fairly small, barely 6.5 inches long, and bears a thin, L-shaped copper cooler with fan; the board also doesn’t require a power connector since its requirements can be supplied by the PCIe slot itself.