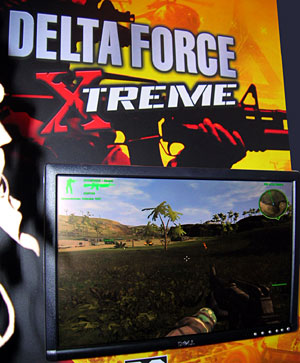 The first major score of the day was Chunx who got a free T-shirt and a media copy of Delta Force Extreme, the latest version of the venerable title from Novalogic. This game is already in stores and look for a review of the title in the near future. The game improves on the original Blackhawk Down and Joint Ops expansion by adding some Operation Flashpoint type enhancements. Players now can crew weapons systems and vehicles, making the game a little more fast paces and allowing a little more punch in the fighting. The graphics of the game really look good, better than any prior Novalogic game. The grass and explosion effects were breathtaking. Some of the gameplay was pretty arcadish; sorry but not very many people can take down an enemy from 900m away with an M4 but it is interesting.

The most viscerally exciting title we saw was EA’s Battlefield 2. To be honest I was more than a little critical going into the booth. But what I saw pretty much made me a believer. Yes, it is still a less than heavy-duty shooter. It doesn’t seem to have the hard core realism of a Hidden and Dangerous II, but there have been some changes in the net code and gameplay that make some of the worst aspects of the first game, like bunny hopping, appear diminished. Balancing the strengths and weaknesses of he various weapon ‘kits,’ and rewarding team play over individual behavior appear to be emphasized in this version. 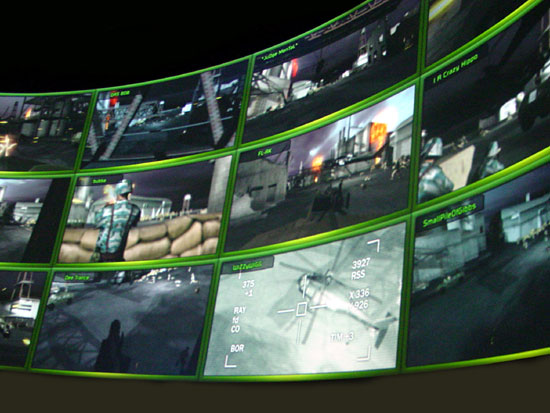 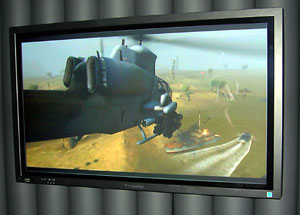 The game looks absolutely marvelous, better in real life than in the videos we have seen and the gameplay is fast paced and very immersive. Chunx called this easily the ‘Best of Show’ for first person shooters on the PC platform.

Like earlier titles you have the ability to fly, drive, run or sail but you also have the ability to jump in and crew things as they become available. Chunx noted that the flight models of the helicopters, while not totally realistic, were much more complex to master than in similar games like Joint Ops. As I said, it is generally a medium weight shooter; real world tactics are nice but probably not life critical in the game. Like the first title I expect this game to be wildly popular, it looks like the multiplayer will be just as solid as the original game and given the current events makeup of today I think many players will be interested in this game. I look to see this one becoming quite popular. 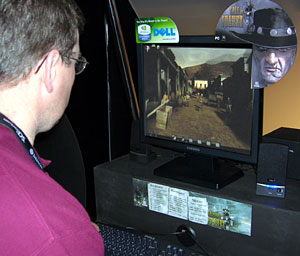 An interesting little title for the PC is a game called Call of Juarez. Unlike most modern shooters in COJ you have nothing more powerful than your six shooters. Based in the ‘old west’ in the 1870’s the game appears to be a cross between the historic old west and the old Clint Eastwood spaghetti westerns of the 60’s and 70’s. While interesting, and somewhat entertaining it certainly has some light weight tactical roots, most notably the health packs (looking like whisky bottles) and ammo packs you can pick up off of your victims. An interesting touch in this game is the ‘gunfight mode’ where you have a slow motion shootout with multiple enemies.

Realistic? Nah. But it is different and fairly fun in the demo that I played. The guns fire sooooo sloooooowly compared to the machine gun quickness of something likeBlackhawk Down and it really made a nice comparison between the two. I am not sure it will take the place of any of the Red Storm games and the poor developer was confused by my questioning of the name of the game, but what I have seen looks to have some fun aspects, if not a Ken Burns style of realism that some of us strive for.