A racing arcade game in development only for PS2 and Xbox and utilizing the Havoc physics engine, IHRA Drag Racing none-the-less sparked our interest in a couple of key areas. The son of a drag racer, I was interested in how Bethesda intended to model the sportsman class cars and the unique rules system that keeps the racing ultra-competitive. Richard Lambert, producer for the game, walked us through the key concepts. Below are some of the highpoints of that discussion, including some game features and concepts that sim fans of any genre might find interesting:

1. Like real sportsman class drag racing, the basic format for IHRA Drag Racing: Sportsman Editionwill be “bracket racing”. That means that when you enter a race event, you must “dial in” your car in qualifying. Once you’ve established your best time in qualifying, running quicker than that time during eliminations will disqualify you from competition. When you receive the green light to start a race will depend on how your “dial in” time compares to your competitor, so if your car ran 0.3 sec quicker in qualifying, your green light will come on 0.3 sec after your opponent gets his green light. Theoretically, if you and your opponent ran exactly duplicated your qualifying runs, your race would end in a tie, with both crossing the finishing line at the same instant. Unless, of course, one of you cut a better reaction time to the green light. And that’s the excitement of bracket drag racing. The cars are very evenly matched, and the rules demand utter perfection from the drivers in terms of driving consistency and reaction times in order to emerge victorious. That would make for some fantastic online racing, but alas, no online multiplayer mode is planned for this title, at least in 2005.

2. Drivable car categories will include IHRA’s Top Sportsman (mostly populated by 60s and 70s era muscle cars modified for drag racing) and Top Dragster (smaller rail dragsters fitted with less powerful engines). In the campaign or race season mode, drivers will use race winnings to upgrade the performance parts on their cars, or move up to the next higher class of racing. Once you have your car configured for racing, you can tune its suspension, transmission, etc. for optimal performance as per most racing games. However, IHRA Sportsman will allow you to test drive the car via an AI “test driver” who can run perfectly consistent runs, pass after pass, allowing you to more accurately assess the effects of a particular setup adjustment on your car’s performance. This puts the player in more of a “strategy” mindset, acting as racecar engineer rather than driver while tweaking the car’s performance.

3. 22 total tracks will be offered in the game, 11 real, licensed race tracks and 11 “fantasy” tracks. However, Bethesda was unable to secure licensing agreements with the big-three auto makers to model real muscle car models in the game, so all the cars we saw were fantasy cars that looked strikingly similar to real-world car models.

Driver Impressions: We were unable to take IHRA for a test drive, but we were able to gather some notable impressions on the game during our interview. First, we learned there are no plans for an “in cockpit” view option. Second, the producer could offer no firm answer on whether controller options for the game might include a steering wheel. At the time, it seemed that only a game controller had been considered. With no plans for an online multiplayer mode, the excitement of bracket racing would seem to be wasted on AI. IHRA Drag Racing Sportsman Edition will be offered in late Q3 2005. 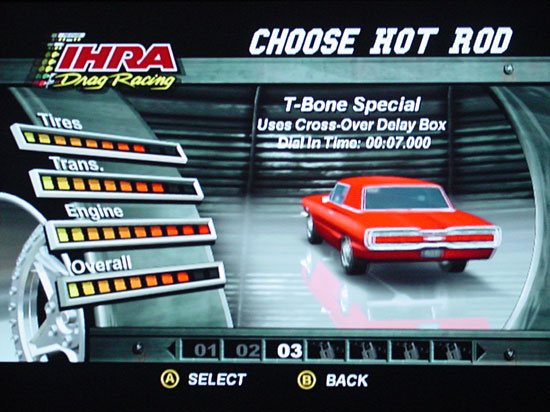