As most of you are aware, Richard Burns Rally is already available in Europe and was SimHQ’s racing sim of the year for 2004. But RBR isn’t a mainstream retail title in the USA — yet. David Clark, Marketing Director at SCi, graciously took time from his busy schedule to chat with us about RBR and “Battle Stations: Midway.” David mentioned the difficulties of marketing RBR in the US marketplace, due to the lack of a well-defined fan base demographic for the real World Rally Cup among US race fans. Since US marketing and PR folk are reluctant to take a risk with a niche market simulation on a form of racing with a poorly defined domestic fan base, RBR might be quite slow in coming to mainstream retail outlets in the USA. That’s unfortunate, because RBR has proven to be a robust, exciting and highly enjoyable title that transcends any real-world race series fan base issues. We surely hope that David Clark is successful in securing shelf space in the US retail marketplace for this exciting and rewarding racing simulation.

Daren Morgan was on hand to discuss this new racing game title, which is being developed only for the PS2.Golden Age of Racing is a Formula 1 game set in the mid 1960s, considered by some as the ‘best’ years of Grand Prix racing and made famous by the superb racing movie “Grand Prix.” While this title isn’t really a title that SimHQ members would find interesting, there were some interesting items that emerged from our discussion with Daren. Most interesting was the developers’ concept for adaptive AI. In GAR, the AI “learns” the tracks just as you do — that is, your first day at the track is also the AI’s first day at the track. As a result, you’ll see the AI drivers making a lot of mistakes at first, overshooting braking zones, entering corners too fast, etc. During your first few races at a particular track, you’ll see more AI wrecks, and possibly get collected in wrecks that are the results of AI errors, rather than just your errors. As time goes on, and you learn the nuances of the track, the AI also learns, such that the amount of errors by the AI gradually decreases over time, which has a side benefit of freeing up CPU cycles and gradually improving frame rates. I was quite impressed with that particular aspect of the game and think it’s a very innovative take on modeling AI learning routines that should make the game a whole lot more exciting and unpredictable to drive. I’d be interested in seeing future hard-core racing sims experiment with variations on this sort of AI learning curve concept.

Driving Impressions: GAR’s demonstration kiosk offered only standard PS2 hand controllers for driving the cars in the game. That’s because once again, no wheel support is planned for this racing title. I am constantly surprised that many racing game titles fail to offer any wheel control support, especially considering that companies like Logitech offer high-quality racing wheel controllers specifically for PS2 titles. It shouldn’t be that hard to code a racing title with options for control via game pad or wheel, and shame on the developers who fail to offer this straightforward option to their consumers. That being said, the game’s physics model indicated it is clearly aimed at the ultra-casual gamer, which seems odd considering that the subject matter might be more popular with a more mature audience. I found that controlling the cars with a game pad was mostly an “all or nothing” affair, where with almost no movement of the game pad joysticks I was at either the steering locks or maxing out the brake and throttle movement. Daren suggested that the GAR has rather advanced control algorithms for steering and throttle, and that there were some “subtleties” to learning how to control a car with a game pad. All I could think as I repeatedly crashed was, “well, gee, no kidding!! That’s probably why real cars have wheels and pedals as opposed to game pads.” 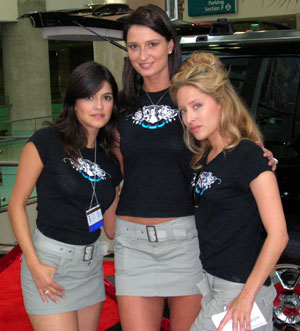 We got the opportunity to discuss EA’s budding NASCAR franchise with Jim Ferris, one of NSR’s development team members. Despite EA holding the exclusive game rights to the second largest spectator sport in the USA, there was quite frankly little to report on NASCAR racing games at E3, mostly due to EA’s lack of available information on the product line. The title on display was NASCAR 2006, an arcade racing game for consoles only, similar to EA’s “Chase for the Cup” game of 2005. Jim and I did have a nice discussion on SimHQ’s exhaustive 4-part review of NASCAR SimRacing, and it was gratifying to know that the folks at EA took the time to read each installment of the review as it appeared on our site, and used it to aid in their growing understanding of the community’s desired feature set for future racing titles. He also told us that EA has a staff that scours the forums of various racing sim web sites (including SimHQ) in order to further gauge the wants and desires of the sim community (although thankfully, they do filter out the more ridiculous and unrealistic comments). When asked about upcoming patches for NSR or plans for follow-on NASCAR titles for the PC, Jim was unable to provide any conclusive insights at this time.

What Jim was able to comment on was the development mindset for NSR. He said the budget was primarily targeted at developing a high-fidelity physics model, while car graphics took a relative “back seat,” in part because there would no doubt be offerings from the 3rd party mod community to address car shapes and skins regardless of the level of detail provided in the retail version. He also mentioned that there was considerable “beta testing” by real NASCAR drivers in order to refine the driving model, and the team felt they had a fairly solid product by the time the game went Gold. Finally, Jim mentioned that the biggest thing the hard-core community can do to ensure that products continue to be offered in their genre is to support the developers. I think the message was clear that without revenues, the hard-core sim genre will die out. Even though Jim wasn’t able to address some of our questions at this time, guod and I really enjoyed and appreciated the time Jim took out of his busy schedule to chat with us, as well as the enjoyable discussion on racing simulation development.