Not a game, but a sim cockpit of an entirely higher order. This thing was so awesomely addicting, that guod and I spent the last 90 minutes of the day driving and salivating all over this incredible toy! It was here that our shameless addiction to racing sims and the enhancing features of this product caused E3 security to “suggest” we leave the building, as closing time had passed!

Offered the VIP treatment by Virtual-E CEO Paul Stary, I had the chance to really wring out the Virtual GT simulator cockpit using SimBin’s GTR and ISI’s upcoming R-Factor hard-core racing simulations. In a word, VGT was truly “awesome” and changed forever my standard for immersion in any simulation experience. VGT takes all the goodness that a high end simulation offers, and makes it “gooder. “A lot gooder”. VGT uses a superb 9 channel, 500W sound system with sub-woofer, a fan system for cockpit airflow, moving magnet vibration-generating speakers mounted in the seat, back and pedals, a 27″ CRT monitor and a highly modified Logitech Momo Force Feedbacksteering wheel to closely recreate the tactile sensations of driving a high performance car. The experience can’t be done justice with words, and unfortunately can’t be obtained by those of us with ordinary means. The basic system retails at $15,900, and with all the whistles and bells added in tops out at nearly $22,000. But really, if you’re into racing sims this thing is worth every penny (even if most of us can’t afford it). Despite the high price, Paul told us they’ve already sold 120 units to “affluent homeowners.” 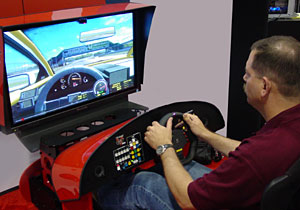 Driving Impressions: The vibration generating system is really at the heart of the driving experience for VGT. Tied into the game’s sound system, vibrations are generated by large speakers designed such that the large magnets move while the sound cone remains stationary. The result is that you literally feel the sounds of the car’s engine and tire grip, which adds immensely to the immersion and the transmission of “feel” as to the car’s grip state. Like many other activities, the addition of good vibrations really added to the overall experience, so much so that it was hard to pry guod or myself out of the VGT cockpit as we worked on our lap times under the nighttime skies of Spa-Francorchamps. 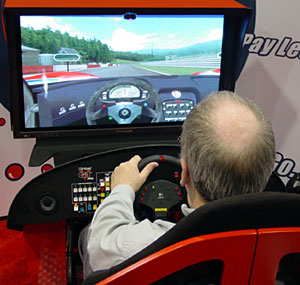 This wasn’t just my first experience with VGT, but also withGTR. While similar in many respects to RSDG’s superbSports Car Challenge freeware mod for F1 Challenge, GTR felt much more refined, and with better sound and audio cues, default setups, and graphics offered a much more realistic and rewarding driving experience than the earlier freeware mod.

As our lap times fell and our smiles grew ever larger, Paul realized that guod and I were truly dedicated sim racing fans. So as an extra-added treat, he switched the VGT simulation mode over to ISI’s latest sim, R-Factor. Utilizing fantasy cars and tracks that closely resemble real-world counterparts, guod and I were utterly amazed at R-Factor’s physics model. It was immediately clear to me that ISI has set the new standard in race car physics with this upcoming title. As we were escorted out of Kentia Hall by E3 security, all guod and I could say was “WOW!!!” about R-Factor’s superbly realistic driving experience, especially when coupled with the Virtual GT simulator. I am hoping that guod can set me up with a long-term test of the VGT — something along the lines of a 5-year long-term assessment of VGT’s uh, reliability and durability. I’ll let you know when that happens….