It seems that the game developers are impressed, too: so far, 16 companies have signed up with Ageia to incorporate PPU coding in their upcoming titles, and 5 existing games are being patched to retrofit them for PPU operations.

As we discussed this new technology with Mr. Davis, it became clear that when the company first thought of computer game physics, the primary area of concern was in explosion particle physics — that is, how much debris could be modeled in an explosion or splash and how accurately it could be depicted. As the PPU design team studied the problem, they thought of other things that could benefit from PPU processing, such as character hair blowing in the breeze, depicting the folds and creases in clothing, the swaying of individual blades of grass as the wind or solid objects acted upon them, etc. But in our discussions, we mentioned other aspects of physics modeling in games, such as weight transfer and transient response of racecar suspensions.

As we talked about high-end simulation physics modeling, it looked to me like a spark was lit in Mr. Davis’ mind, and he seemed to be very interested in the prospects of modeling this type of physics as well. We certainly hope that more work proceeds in this direction.

For its initial release, Ageia will release its PhysX as a PCI expansion card. After establishing its design in the market, PhysX will appear in a PCI-Express version as well. But it’s not just the hardware that makes PhysX happen. Ageia is also working on the Physics Processing code that will allow games to take advantage of the PPU, but with games coded for PPU operation, players without a PPU installed in their machine will still see benefits from the enhanced properties of the physics processing code — although for the full effect, you’ll need the PPU in your machine. This reminded me in a way of Hardware Transform & Lighting code for Nvidia graphics cards.

Asus will market the PhysX PPU card for Ageia, and the card itself will sport 125 Million transistors and 128 MB of GDDR3 RAM. The card is about the size of a high-end sound card, with a small fan attached to the PPU similar to modern graphics card configurations. Expect the price to be in the $250 range, with units arriving on store shelves in Q4 ’05. 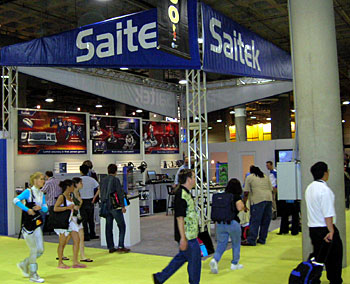 Mad Katz, Logitech, Saitek and CH Products all had booths at E3. However, none were showing any new simulation controller equipment, only the existing product line. All but CH had some nice game pads on display, however. Thrustmaster was a no-show at this year’s E3, notable because this is THE electronic entertainment convention in the U.S.

At E3’s past I’ve seen a lot of simulation cockpits for the aviation crowd, but this year the closest thing to a flight sim cockpit was a hemispherical projection screen running Pacific Fighters at the CH booth. However, there were quite a few sim cockpits for retail sale on display at E3, but they were all for the racing sim crowd. I’ve listed the racing sim cockpits below, in order of complexity and price. All of them included precise mounting locations for sound systems, although the Virtual GT (mentioned on Day 1 here) contained a complex sound processor unit in addition to a vast array of speakers and sound vibration systems. It quickly became clear that these sim cockpit manufacturers have figured out the critical importance of sound quality when it comes to immersion and physics cues for sim racers.

Playseats – Playseat consists of a racing seat that connects to a rail system, which supports a wheel mount, monitor stand and pedal pedestal. This looked like the least complex and least expensive of the bunch, as well as the easiest to disassemble and store. Too bad it was only being demonstrated with ultra-lite console titles.

HOTSEAT Racer – Looking like it was mostly made of large diameter PVC pipe and pipe connectors (although it’s really a steel chassis), the Hotseat also consisted of a driving seat and platforms for pedals, monitor, and wheel — oh, and a cup holder, too. The Hotseat comes with its own 6-speaker Dolby surround sound system, with frame-mounted speakers all around. According to their web site, the unit sells for about $650.

VRX – Priced at around $2500, the VRX cockpit was probably the most “bang for buck” cockpit at the show. Pricey yes, but this cockpit did the best job of sound reproduction of all the other open cockpits at the show, and sounded nearly as good as the VGT, with somewhat less robust tactile effects for 1/10th the price. Its tactile and audio sound system included a 300W 5.1 surround speaker system with a 1500W tactile transducer. Pretty cool stuff.

Virtual GT – The ultra-high end exotic cockpit of the bunch. Awesome sound and tactile effects recreation and an array of hard-wired options buttons made this cockpit the most capable racing recreation of the bunch, but at a price only affordable by the exceedingly affluent sim racer. I do have high hopes that we might be seeing these cockpits for rent at automotive-themed events in the future, however. If you see one, do yourself a favor and give it a try.