A Day In The Shoothouse

Outside the entrance to South Hall, the U.S. Army had set up a tent containing a new simulator training aid based on the America’s Army game engine. Utilizing the front half of a Humvee chassis, some projector monitors, big screens and Lasershot Shoothouse Simulation gear, 20mm and I were able to pick up a SOP mod M4, or man an M249 SAW from the pintle mount of the Humvee and ride shotgun for a convoy of trucks moving through the mean streets of a run-down desert town. 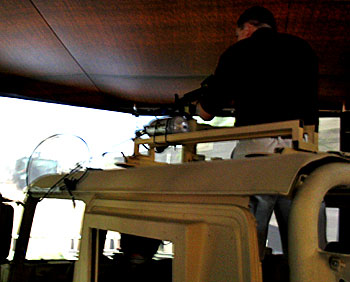 As real or AI opponents appeared from the buildings and rubble to engage us from on the screen, we could aim our real weapons and “fire” laser shots at the screen, which were scored by the computer and registered hits or misses on the bad guys, just as if we were playing a tactical shooter. Even the misses resulted in puffs of dirt or sparking ricochets on the 3D environment of the game, which was quite cool. Of course, holding, aiming and squeezing the trigger of a real-life SOP Mod M4 or SAW rather than a mouse made this the ultimate way to play a tactical shooter. It also made aiming a lot more challenging than just wielding a mouse. It sure would be nice if these things were available at home, because I want one.

It might seem like hardware and software are what E3 is all about, but its people that invent the projects and sweat out the details from design concept to retail sales. The people equation is where the all-important back-story lies. This year the SimHQ team ran into a lot of folks at E3 who are dedicated to providing quality products geared specifically for the hard-core simulation enthusiast. These are people who you need to know are out there working to keep your hobby alive and productive. Realize that what’s keeping the community going right now isn’t infinite corporate cash flow, but the inspiration, vision and commitment of a relatively small segment of the electronic entertainment community. Over the past three days we met a lot of great folks at E3 — too many to mention — but here’s a short list of some of the folks that really impressed us at the show and what we learned from getting to know them:

Steven Viljoen, lead producer and designer for SimBin’s GTR, a man who can be justifiably proud of his team’s exciting new title. Stephen recommended that we download and apply the latest 1.4 patch for GTR, which fixes some gameplay issues and also contains changes to the included Starforce drivers (hopefully “good” changes to Starforce).

Robert Coulter, CEO and co-founder of Adrenaline Computers. A huge fan of MSFS and online pilot, Robert’s experiences with getting MSFS to run smoothly online drove him to create Adrenaline to address the specific computing needs of simulation “junkies.” Adrenaline’s custom-built PCs are tailor-made for each customer’s unique simulation tastes, with games pre-installed and re-configured within several pairs of Raid array drives to maximize their frame rates for smooth gameplay. The computer chassis are works of art in themselves, and support a liquid cooling system for the CPU that keeps temps down and performance up. Chunx drove GTR on an Adrenaline system powering a huge hi-res display, and never saw a hiccup or pause on-screen. Frame rates appeared to be very high, and the presentation was quite impressive. Of course, that kind of performance and customer support doesn’t come cheap — Adrenaline PCs run in the $6000 range — but you get what you pay for, so if you enough disposable income, one of these exotic PCs might be just the ticket for your needs. Robert mentioned the possibility of sending a system off to our hardware guru John Reynolds for a comprehensive review (unless guod intercepts that shipment!), so stay tuned for further developments on that front…

Rod Chong, senior designer and producer for 10Tacle on GT Legends. Rod gave us the full briefing and demo on GTL the day before (see our Day 2 article here) and what impressed us most was Rod’s quite apparent enthusiasm for motorsports, both real and virtual. His love of the sport clearly shows in the quality of his craftsmanship, which should translate into making GTL a spectacular product when it’s released.

Marcel Jung, PR manager for 10Tacle Studios (GTL) and Andrew Hoolan, Director of PR for Tri Synergy (BoB II). You can tell a good PR manager by their enthusiasm and drive for promoting their product. Marcel and Andrew stood out as head-and-shoulders above the rest of the PR crowd at E3, but they had a “cheat” that put them there — they use the products they endorse. Again, its great to have folks with passion working the hard-core sim business. Thanks, guys.

Robert Stanners, President of VRX Industries Ltd. VRX supplied a very nice racing cockpit with integrated surround sound system for the Adrenaline display and hot lap contest. What Chunx learned about the beauty of these dedicated sim cockpits was almost lost on him due to its subtlety, but then the subtlety sneaks up and hits you like a hammer — intuitive ‘feel’. Chunx explains it this way, “I was driving at Donnington Park, and my left tires got onto the white stripe at the edge of the track. The white stripe incorporates a ‘rumble strip’ and while concentrating hard on my racing line, I noted the strip’s vibration and nudged my car back onto the blacktop. It wasn’t until I got out of the cockpit that it hit me — I didn’t just feel the rumble strip in my hands via the Momo Racing FF wheel, I also felt it in the seat of my pants. That tactile sensation is identical to what you’d get in a real car, and it made my response much more quick and precise. That the sensation was so intuitive, my conscious mind didn’t even process the info and that is the beauty and value in the concept of these racing cockpits. I am convinced that if you are building your own ‘sim pit’ you need to address the sound and tactile sensation (noise vibration) aspects to gain a more realistic experience.”

Jason Williams, Natural Point’s TrackIR product manager and active SimHQ forum member. Jason is another guy whose passion and vision for the genre is obvious when you meet him. E3 was Chunx’ first exposure to TrackIR, and he was very impressed with the capabilities it offers for sim racing. “TrackIR seems like a durable and highly useful peripheral, and I can see it quickly becoming as ubiquitous to computer desks as a mouse and keyboard for interfacing with a gaming PC.” WKLINK opined that every SimHQ reviewer should own a TIR, so that every game review will include a discussion of TIR integration by default. Along those lines, what Chunx saw at E3 has made me determined to purchase a TIR system when I return home from the event. For the future, we’d love to see Jason also branch out into console titles, because that would increase his cash flow and exposure to the lucrative general gaming market. Not that we want Jason to get rich…. But the more success TrackIR has, the better and more versatile a product we’ll see in the future for our genre (OK, call us selfish). Keep up the good work, Jason — its great having hard-core simmer in high places!