In the fall of 2002, ATI was the first graphics company to reach the market with a DX9 product, the Radeon 9700 Pro. Building on the subsequent success of that chip, ATI, largely through the use of process technology, extended the basic architecture of the 9700 Pro across several generations of products, making slight tweaks or refinements to the core to remain competitive yet leaving its basic design relatively unaltered. This changed last fall with the release of the Radeon 1000 family of products, which represented a significant architectural change from ATI’s previous graphics chips. Unfortunately for ATI, the flagship chip of this new family, code named R520, was slated for a summer ’05 release; yet due to a small bug caused by a 3rd party library tool used in the engineering of the new part and duplicated throughout its design the launch was delayed for months until the issue could be sorted out. Once launched, however, availability of these new products was quite good, and ATI has quickly followed up with a refresh of the high-end parts, the Radeon X1900s. Fortunately for SimHQ and its readers, ATI has sent us several graphics cards from this new product family — namely, the Radeon X1600 XT and Radeon X1800 XT — which we’re going to take for a not-so-quick spin through an updated benchmark suite to see how well they fare with some of our favorite simulations and games.

Before delving too deeply into ATI’s new architecture, a brief glance at the main points of the graphics boards tested for this article is in order. Sad to say, we were unable to obtain an NVIDIA 7800 GTX for this article to evaluate how well the high-end graphics boards of these two competitors fare against one another in our benchmark suite. Of course SimHQ would be more than willing to examine NVIDIA’s parts if they become available at a later date. As a result of this situation, however, special attention will be paid to the performance gains this new generation of parts bring compared to the first of ATI’s high-end, previous generation R400 family, the X800 XT. The general specifications for the chip and board configuraton of each tested part is as follows:

Looking at the above table we see a strong resemblance between the X800 XT and X1800 XT, with both chips including 16 shader pipelines, and texture address and ROP units. The X1800 XT, however, has a significant memory storage and bandwidth advantage, with twice the amount of onboard GDDR3 memory rated for much higher frequencies. With the similiarities between these parts from different generations, the key to understanding the performance gains the X1800 XT brings to the table is realizing that ATI took their existing architecture from the R4xx series and focused heavily on increasing its overall efficiency. We’ll examine the main techniques ATI employs to achieve higher levels of performance for the Radeon X1000 family slightly later in the article. While the X1600 XT, as a member of the new product family, shares the feature set of the faster X1800 XT, looking at the specifications table above its limited number of ROP and texture addressing units make the product look to be an impaired part insofar as pixel and texture fill-rate are concerned. Testing will show whether or not its price and performance are in agreeance with one another. ATI has adopted TSMC’s 90nm process for their entire Radeon X1000 product family, which certainly helps explain the high transistor count and record clock speeds attainable by these new graphics chips.

The image below is a diagram of this new, rather complex, architecture, and a glance shows how it is divided into multiple sections, such as pixel and vertex engines and the render back-end (ROPs). 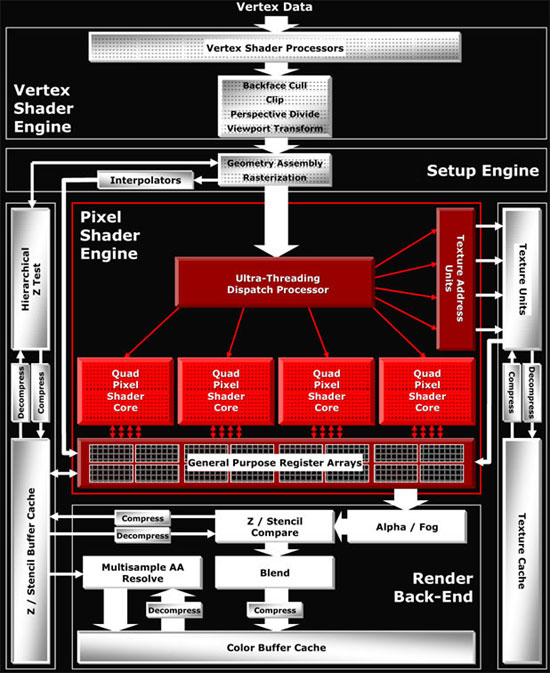