When ATI launched CrossFire, their first dual-card graphics solution last fall, some were left scratching their heads over a few of its limitations. Using an external, single-channel DVI cable as the interconnect between the two graphics boards, Radeon X850 CrossFire configurations were unable to display a higher resolution or faster refresh rate beyond that of 1600×1200 or 60 Hz. This limitation, combined with the need for an external cable and “master” edition boards made the initial CrossFire solution appear somewhat ungraceful — particularly so being based on the aging X800-generation graphics chips and their lack of SM3.0 support. With the subsequent launch of the Radeon 1000 family, however, ATI has partially gone back to the drawing board and improved their dual-card solution. Today, SimHQ will test a Radeon X1800 XT CrossFire setup, examining what performance or other gains are to be had from ATI’s dual-card graphics solution.

Crossfire – There Can’t Be Only One

Though based on the Radeon X1800 XT part, the CrossFire master boards have a slight change in their specifications. The clock speed of its graphics chip has remained the same, a frequency of 625 MHz; yet the 512 MB of onboard GDDR3 memory is set to 720 MHz rather than the 750 MHz clock speed found on standard X1800 XTs. Aside from this slight decrease in memory speed, the master board otherwise appears identical, mainly because its heatsink occludes the compositing chips that makes CrossFire work. While ATI has developed various rendering modes to enhance game performance for CrossFire owners, the master and slave boards communicate through an external DVI Y-cable, or dongle, that transmits the slave board’s output to the compositing hardware on the master card. This hardware is comprised of five chips, two for receiving, two for sending the final composited output to the display, and, last, a RAMDAC that gives this improved version of CrossFire its ability to handle higher resolutions and refresh rates.

CrossFire supports three different rendering modes. The first, Alternate Frame Rendering (AFR), is also the least complex. AFR works just as its name implies, alternating which frame is rendered per graphics board as the compositing engine receives these frames and outputs them to the display. According to ATI, AFR has the most potential for performance gains of the rendering modes available with CrossFire since it is the only mode that allows each graphics board to work completely independently. 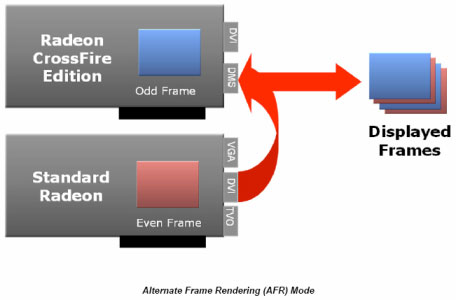 The second mode is called Scissor. ATI names this mode Scissor because it cuts the screen in half and hands each portion to a separate graphics board. This division, or cutting, of the screen can be asymmetrical and can run vertically or horizontally, depending on the application’s rendering requirements. In an attempt to reduce CPU overhead from adjusting how much of the screen is assigned to each board, an application that is profiled to use Scissor will have the division preset rather than dynamically adjusted on a frame-by-frame basis. Scissor is the default CrossFire rendering mode for OpenGL applications. 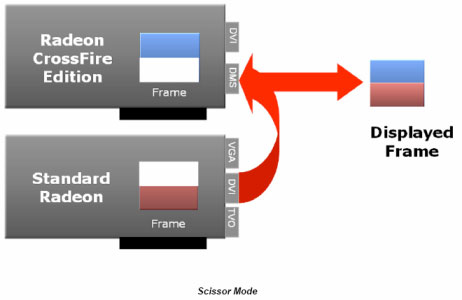 The next mode is labelled Supertile. This is ATI’s preferred method for CrossFire, and the default rendering mode for DirectX titles. SuperTile works by dividing the screen into alternating tiles 32×32 pixels in size, and in a pattern that resembles a checker board. These sets of tiles are evenly distributed across the screen between the master and slave boards, and the compositing engine blends the alternating tiles into the final image to be displayed. SuperTile, however, is only the default DX mode for the Radeon X1800s and their 16 pixel shader pipelines; parts with fewer pipelines, such as the X1600s, use Scissor mode as their DX default method. 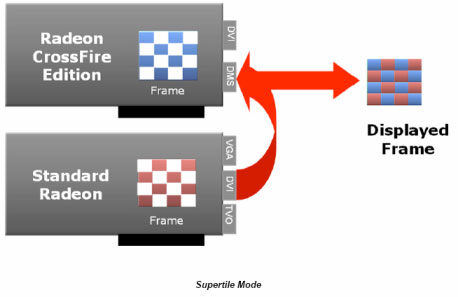 Last, CrossFire also has available a SuperAA mode that is designed toward improving image quality rather than accelerating performance. SuperAA employs the compositing hardware to merge the output of both boards, which are each applying anti-aliasing to the application with different sampling patterns that are blended together to produce a higher quality mode of AA. SimHQ will examine SuperAA — its performance and image quality-later in this review.

As for the rendering mode a particular title uses, ATI’s driver team determines which method gives each application the best compatibility and performance gain and creates a CrossFire profile that defaults it to that mode in their Catalyst drivers. Unlike NVIDIA’s SLI, however, users are unable to change or experiment with the different rendering modes on a per application or game basis, though this could — and hopefully will — change in the future. Worth noting is that CrossFire edition boards do not have to be paired with an identical card, though combining a 512 MB master board with a 256 MB slave will limit the first to using only half its onboard memory. Last, “master” CrossFire boards currently have a slightly higher price tag than standard cards, most likely due to the added costs of the compositing chips and interconnect cable.