The Ribbstick (faux stick base not included).

One of the most unique aspects of the Thrustmaster Cougar is the community produced modifications to this popular stick. These modifications usually address short comings in the stock HOTAS. While the stock Cougar models the F-16 stick handle quite well, the actual F-16 stick barely moves at all. Control input from the pilot is measured by force put on the stick. The standard Cougar does not model the force sensitive aspect of the real stick. Enter Dave “Ribbs” Patterson to bring us the latest force sensitive Cougar mod. The FCC and FSSB are two other modifications that bring force sensitivity to the Cougar. While they do make the Cougar force sensitive, the Ribbstick is a large departure from those two designs. The Ribbstick measures it force in a completely different way than the other mods and it is also geared towards cockpit builders since it allows for realistic placement stick without the stick base. However, for the non cockpit builders, it is possible to install the Ribbstick in a HOTAS special stand as demonstrated by Patterson’s demo unit. Let’s take a look at what makes this design special. 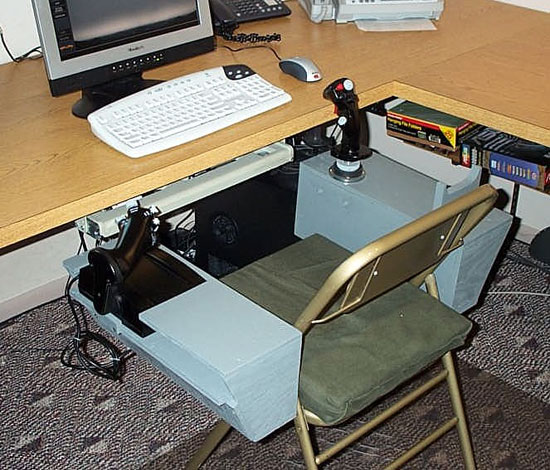 The Ribbstick is based off a 3/16″ metal side plate. The stick shaft parallels this plate and screws into an attachment point at the bottom of the plate. Overall, all of the metal parts (which is most of it) of the stick are quite robust. It is a very impressive piece of metal work. About halfway up the stick shaft is the tube housing. The Ribbstick works by the stick putting pressure on these tubes. The tubes are connected to transducers that sense the air pressure changes and then send the appropriate axis values to the Cougar circuit board. Patterson has had working prototypes for over 2 years now and has even applied for a patent for design. While it is new to the Cougar community, the Ribbstick has been perfected by Patterson over the long term.

Obviously, the Ribbstick with its size is not a drop in install! However, most cockpit builders will have little trouble with the install. The beefy 3/16″ stick plate is normally mounted to the inside wall with the stick shaft on the other side of the wall. Patterson includes a template to make the necessary cut-outs in your cockpit side wall. Installing the plate on the outer wall is possible and is an easier install since you don’t have to cut out parts of the side wall for the shaft attachment and tube housing. However, it will give you a slightly more outboard stick placement than the actual F-16 stick. One issue to note is if you have short side walls, your Ribbstick might be slightly higher than realistic. The real transducer base housing of the F-16 stick is 5.3″ tall. After mounting the Ribbstick as low as I could on my modified AB Mk.1 pit, I ended up with a somewhat taller stick than realistic. However, I don’t think this is a huge issue.

If you opt for the inside wall install, the stick shaft can be removed easily by loosening a hex-head bolt at the bottom of the stick. Be sure to check that the handle head is aligned properly and the stick shaft is retightened sufficiently. Otherwise you may have a slight shift in center. While it is possible, most users will not need to remove the tube housing like I did. I had to so that I could slide the plate up to have enough clearance to retighten the stick to the base after it was on the other side of the wall.

Patterson has built in the wires and connectors to attach to the stick buttons and axis sockets. As a result, no wire splicing is needed in the install. Unlike the FSSB or FCC no trimming of the sensors in needed. Speaking of sensors, while installing the Ribbstick, try to protect the transducers as much as possible. With as heavy duty the rest of the Ribbstick is, it is easy to forget that it still has a couple fragile electronic parts. The weak point is at the tube nipple on the transducer.

Another perk of the Ribbstick is that it allows you to not use the Cougar base. This can save some space and add realism. However, I would recommend some kind of project enclosure to protect your PCB if you decide to go baseless. Of course, the Cougar base does still make an excellent project enclosure for the board. Also to prevent you from zapping the Cougar handle, run a ground wire either to the ground wire attached to your USB cable with newer Cougars or run it to a substantial metal object with older Cougars lacking the ground cable (my older model is grounded to my computer case). Your install should be smooth and successful as long as you take good care of the electronics and not put the rest of the stick in with a sledge hammer (and that’s just because most cockpits can’t withstand the hammer, I bet the Ribbstick would hold its own).

One other install note. Due to the increased force needed to move the stick, I highly recommend building an arm rest like the real F-16 has. It allows you to have more leverage on the stick to prevent fatigue and be more exact in you stick movements. 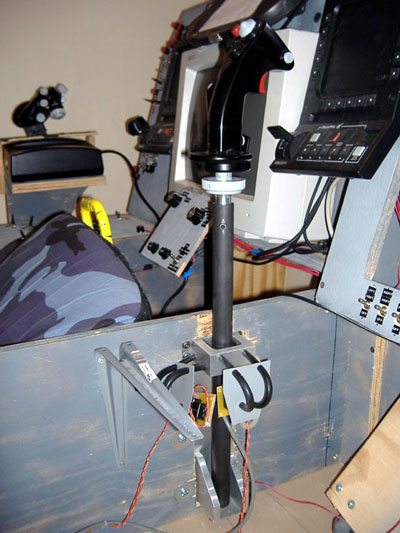 The stick in my cockpit.

Overall I’m very impressed with how the Ribbstick feels. It is very responsive and precise in every sim I’ve flown it in. Of course, it really shines in Falcon! Small forces are precise and smooth. Large control inputs are heavy and deliberate; it makes for a good reminder that you would actually be feeling Gs. I have a few hours in USAF F-16 unit training simulators and the Ribbstick feels even closer than my FCC does to the actual F-16 stick forces and movement. Stick forces can also be adjusted through the Cougar software by adding curves and deadzones to the axes. The forces can be reduced all the way down to 10 pounds with the maximum around 20 pounds. The transducers have no spiking and should be more reliable than pots. They do have a little bit of center point shifting (which actually may be due to me not getting the stick shaft screwed down tight enough during the install). But it isn’t any worse than my FCC and not noticeable in any sim that I’ve flown so far. If it still bothers you, a small center deadzone can be added to completely eliminate it. The Ribbstick passes the in-sim aerial refueling, landing, aerobatics, and dogfighting tests with flying colors. However, if you use the realistic full forces that the Ribbstick can provide, expect a bit of a work out when dogfighting!

The Ribbstick is the best force solution available to cockpit builders. It will allow for realistic stick placement and forces and allow you to get the Cougar’s base out of the way. The Ribbstick could also be a solution to some desktop fliers as well with creative mounting methods. It is a great design and is very robust. I used to worry about who I let fly my cockpit, lest they hurt my precious Cougar. Now as long as they aren’t carrying a cutting torch, I’m confident that the Ribbstick will stand up to whatever they can dish out! I feel very lucky to have the first production Ribbstick and I think that anybody who makes the $600 investment for it will feel the same way.

You can reach David “Ribbs” Patterson, creator of the Ribbstick here
via SimHQ’s Private Messaging. Note: You need to be logged-in first.