Western Digital introduced the first Raptor® hard drive almost five years ago, a 37 GB unit that was the first desktop ATA drive to offer 10K RPM spindle speeds. Since then Western Digital has been improving the Raptor family across multiple generations, releasing a 74 GB drive via improved areal density, and then adding a second platter years later for the 150 GB Raptor.

Enthusiasts valuing raw drive performance over storage capacity have had long waits between these generational improvements, and as of this past spring it had been almost 18 months since the release of the Raptor X. With the advent of fast, 7200 RPM terabyte drives, the aging 150 GB Raptor’s capacity was quickly becoming too constrictive for most users. With its fourth generation Raptor Western Digital has gone beyond the cosmetics of transparent covers of the Raptor X and this spring announced its 300 GB VelociRaptor drive.

The most notable change for this new generation of Raptors is the move to a 2.5” chassis. This new 2.5” design uses two 150 GB platters, and WD claims that the reduced diameter span has allowed them to improve the VelociRaptor’s seek time to 4.2 milliseconds, a 12% improvement over the previous Raptors. And end users owning standard desktop cases need not worry about mounting the new drive in a standard drive cage since the new VelociRaptor drives come on a 3.5” aluminum sled that WD has dubbed the IcePAK. Despite this name and the heatsink-like fins of the IcePAK, though, the sled’s design is for form factor purposes rather than heat dissipation. The VelociRaptor is also the first drive of the Raptor family to support a 3GB/sec SATA interface, though the units retain the 16 MB cache of the previous generation. Last, WD has always presented the Raptor line as enterprise-class parts, and as such the firm claims a MTBF of 1.4 million hours and offers a 5-year warranty on these drives.

For this article we pitted the new VelociRaptor against the line’s previous generation, the 150 GB Raptor, and against an older 7200 RPM SATA drive, the 250 GB Maxtor MaXLine III (which also has 16 MB cache). 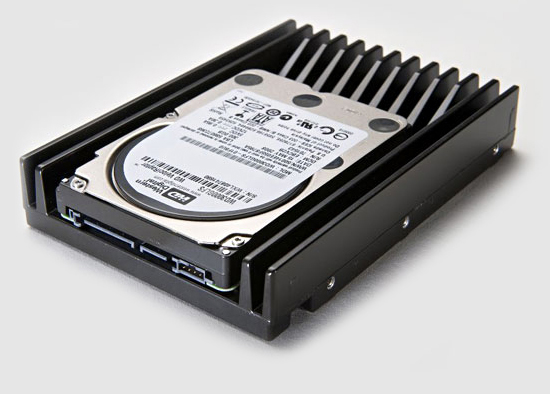