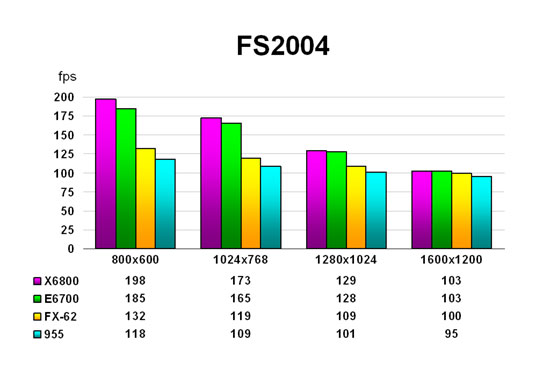 FS2004 again shows an amazing performance delta among the tested processors, with the E6700 outscoring the FX-62 by 40% and the X6800 by 50% at the lowest resolution. Configured with high settings in the various display panels, FS2004 sees this large margin largely vanish at 1600×1200 as the title’s performance becomes more dependent upon the installed graphics board. And despite its clock frequency advantage over the two Core 2 processors, the 955 against trails far behind Intel’s new parts.

Lock On: Flaming Cliffs was tested using the “SU-25T vs. two A-10” replay with the in-game options at a combination of high and medium settings (heat bluring off). 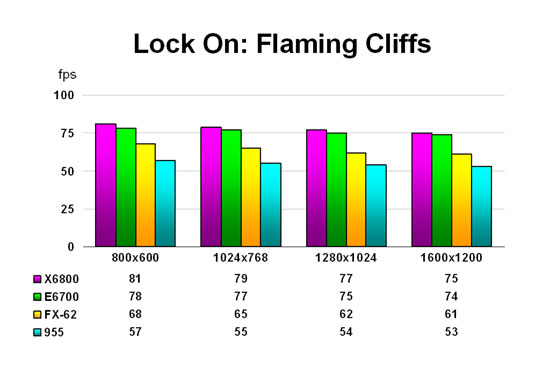 Flaming Cliffs continues the pattern of Intel’s Core 2 parts dominating, though the performance scores are much closer than with the titles previously discussed. The X6800 outperformed the FX-62 by roughly 20% across all tested resolutions since Flaming Cliffs sees a smaller change in its reported frame rate with resolution scaling compared to most other titles. Likewise, the E6700 also outscores the FX-62 in a similar pattern, though at just a few frames slower than the Extreme part at each resolution; the higher clock frequency of the X6800 (2.93 GHz) showed very little impact compared to the E6700’s 2.67 GHz clock speed. And the 955 was outperformed by 50% by the Core 2 parts and by roughly 20% by the FX-62.

rFactor was tested with a custom demo recorded on the Sardian Heights race track. The DX9 shader profile was selected for all tests. 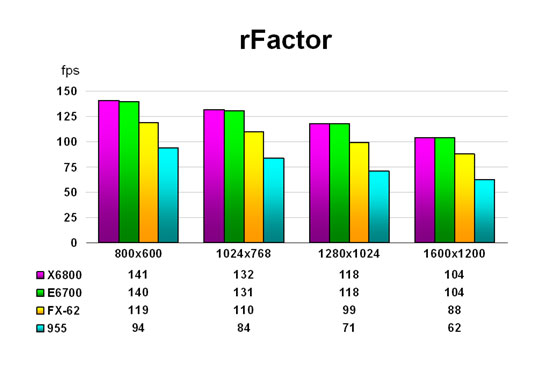 rFactor displayed a pattern rather similar to that of Flaming Cliffs, with the two Core 2 processors producing almost identical scores at each tested resolution despite the differences in clock speed. The FX-62 trails behind both Core 2 parts by roughly 15%, a noteworthy, yet smaller, performance delta than what the earlier simulations displayed. And, last, the 955 naturally brought up the rear, producing only 2/3rd the frame rate of Intel’s new design and falling behind the Athlon 64 by a solid 25-40% at various resolutions.