The ability of a HOTAS controller to use logic and math allows if / then programming that can increase the utility of the HOTAS.

All logical and math statements for CH equipment are made in the CMS language. Control Manager can do math, which increases the logical capabilities of CH Product devices a great deal. For example, math gives the CH equipment the ability to “virtualize” analogue, differential wheel brakes when a sim only accepts a single digital braking command, through the use of fancy programming.

Mathematical statements also allow so-called digital axis programming (programming one or more digital keystrokes in certain bands of an analogue axis, usually a rotary) for CH equipment, as well as the ability to program a controller button to do different things when it is held down for different amounts of time.

The Flight System G940 does not have logical capabilities that allow for the advanced programming techniques discussed above, although there are provisions in the Logitech Gaming Software for programming simple digital axis control (called “zones”).

The X-52 Pro Flight does not have logical capabilities that allow for the advanced programming techniques discussed above, although there are provisions in SST for programming simple digital axis control (called “bands”).

X-65F logical capabilities mimic those of the X-52 Pro Flight. 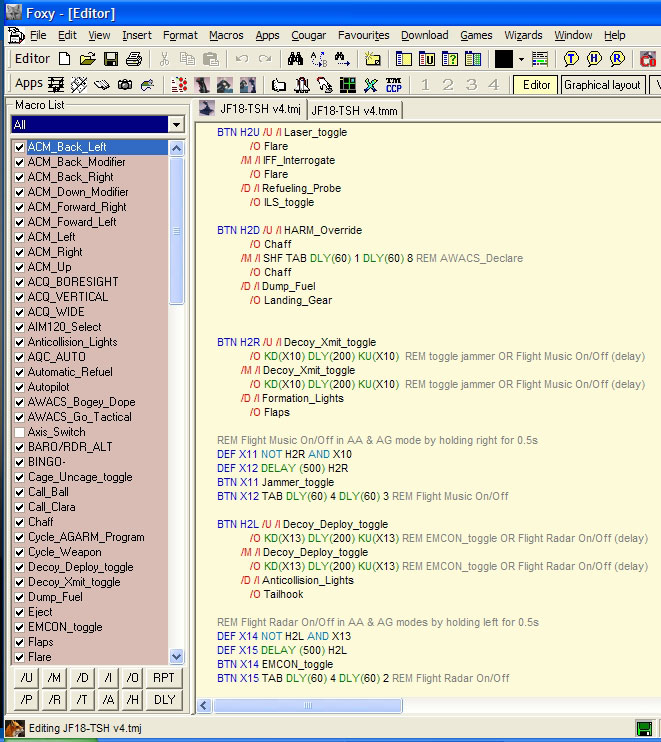 T.A.R.G.E.T. also has a number of built-in functions that greatly simplify logical programming. The most useful of these is the TEMPO function, which easily instructs T.A.R.G.E.T. to perform one command when a button is held down briefly, and do something else when it is held down for a longer time. In CH Control Manager and in Foxy it is just as possible to create this sort of functionality, but it takes more complicated code.

Proper testing utilities allow a user to determine if he or she has programmed the HOTAS as desired. Proper documentation allows a user to learn about all of the HOTAS programming capabilities and use them wisely.

Control Manager includes a key tester that displays all keyboard keypresses, including “invisible” keypresses (e.g. ESC, F1, Print Screen, etc.). The device test screen can be used to test DirectX button presses and axis responses. This is a complete and simple test suite that should suit all needs.

Control Manager documentation is primarily provided through the well-written help file. Although the help file does not cover all aspects of the program, it does provide useful CMS scripting examples and uses plain English to teach the user how Control Manager works and what it can do.

Good orientation and training basics for the CH Products Control Manager software is available in the “Control Manager for Dummies” pdf reference by Ken “531 Ghost” King. You can download it from here (8MB).

The Flight System G940 help is minuscule, and what little there is is through the Logitech Gaming Software’s help system that is written generically for all Logitech controllers, and not for the Flight System G940’s specific capabilities. There is no key-testing utility; Logitech recommends using Notepad, but most “invisible” keystrokes don’t show up in Notepad. 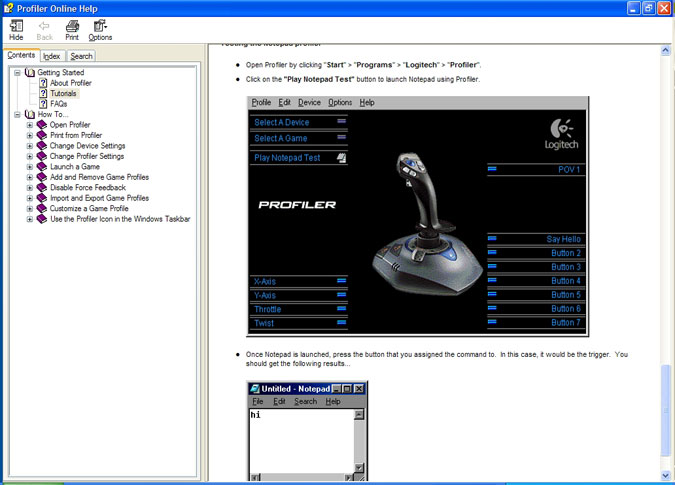 Downloadable PDFs and HTML help files written to the hard drive at installation provide clear programming instructions. A profile tester is included in the SST software.

X-65F documentation and testing capabilities mimic those of the X-52 Pro Flight.

The HOTAS Cougar has similar help and documentation features as CH Products. Useful tutorials are provided by means of heavily commented controller profiles. 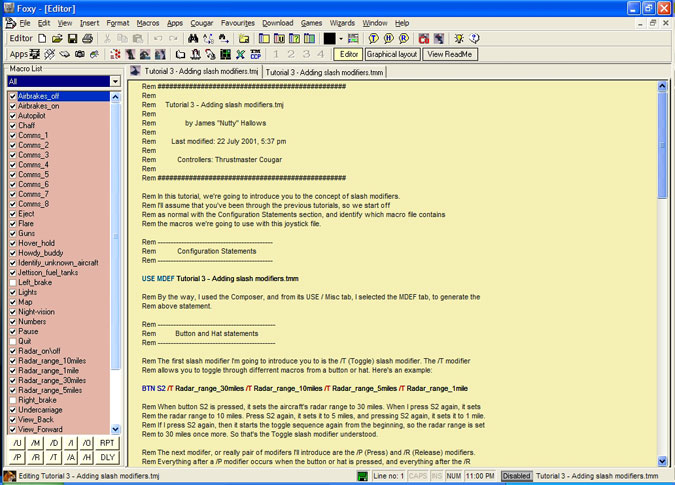 The T.A.R.G.E.T. manual uses stilted English, written by a non-native speaker, and includes grammatical errors, spelling errors, and incomplete sentences. While I appreciate the fact that the French programmers who actually wrote the WARTHOG’s programming language had a hand in creating the manual, a product this expensive deserves professional and less distracting documentation. Like T.A.R.G.E.T. itself, hopefully the T.A.R.G.E.T. documentation will continue to improve.