Flight sticks and HOTAS have always been a rare find for the Xbox 360 console. There was that one ACE EDGE that looked like a X36 with new guts released with Ace Combat 6. Then there was the Saitek AV8R-02 that was a wired option and worked with most flight games, but had centering problems with weak dead zone causing an inability to actually pinpoint a target. Now Mad Catz’ Cyborg Divisionhas released the first wireless flight stick for the Xbox 360. The flight stick also works with the PlayStation 3. The F.L.Y. 9 uses the same wireless technology that all Microsoft wireless products do, and links to the console in the same familiar way. I have no clue what the “F.L.Y.” acronym is supposed to mean other than the obvious FLY…get it? Nor do I know what the “9” designation means.

I acquired the games the F.L.Y. 9 is intended to support, and was ready to put the wireless stick to the test. 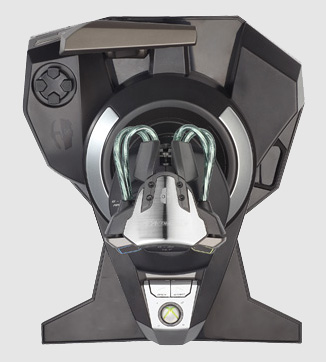 The design of this stick is pretty good! Very well made, with multiple adjustable settings on the hardware side. It comes with a built in tool to adjust grip, height, and angle. It comes with all the buttons required for a controller, it has a headset jack, and a lap extension set. The the F.L.Y. 9 can either sit flat on a desktop or table, or attach the lap extensions and the stick fits comfortably and securely on your upper thigh. I must admit they did well on the design for use on the couch.

However, the buttons are a different story. Most are done well, like the bumper buttons on the left side and in front of the stick. My biggest complaint about the design is the fan button presentation on top of the stick, especially where the B, X, and Y buttons are positioned. Above the fan layout, on the left and the right are the trigger buttons, and I can’t tell you how many times I accidentally hit the wrong button while playing. The buttons on that fan wheel are too small and too close to each other. A little bigger, or a little more space would have made a world of difference.

The wireless function seems to work perfectly. It matches with your Xbox in the same way a gamepad does. The Xbox 360 then IDs it without problem, and I never once had a controller disconnect, as I sometimes do with a Microsoft Gamepad. Nice!

On the side of the stick you have a mode switch. Mode 1 is for future flight games and Birds of Prey, Tom Clancy H.A.W.X. and Ace Combat 6. While Mode 2 is for Blazing Angels 1 and 2.

There is no other form of software adjustment. You cannot reprogram or customize any keys unless you do it in-game. One might want to do this because of a button layout problem in an older game not designed for this stick. Will we ever see controllers that allow for programming the way we want on a console? I just don’t know.

The stick worked with all the games supported in mode 1. All the buttons, throttle, rudder twist worked, but the stick itself was stiff. So stiff that it was very hard to get a smooth input adjustment. After a couple of weeks use, the stick’s stiffness loosened. That greatly improved the feel, touch, and accuracy of the stick in-game. 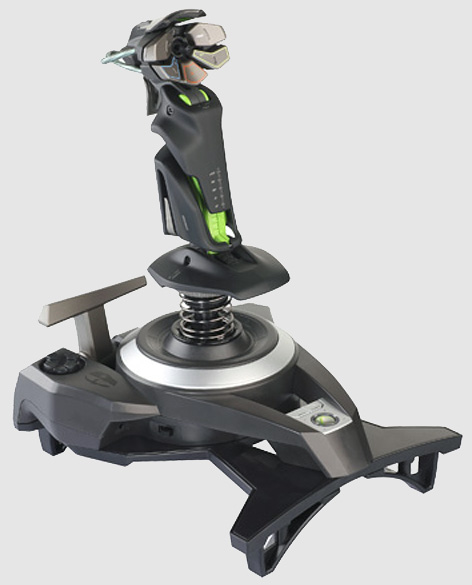 In mode 2, the mode that supports Blazing Angels 1 and 2, I could not get the stick to work correctly in-game. The twist rudder moved the throttle, the left to right controlled the pitch. Everything seemed backwards in Mode 2. I was unable to see how to select or adjust anything in game to correct it.

It did work the best with all the latest flight games like H.A.W.X.and Birds of Prey. So it may have a nice future depending on the games that come out and if they support the F.L.Y. 9.

The cost of the flight stick is $99.99 MSRP. Street price is as low as $71 USD (at Provantage) for this well-built, multi-adjustable flight stick.

The lap attachment is a nice addition.

The connecting function to the Xbox 360 is solid and never failed to work correctly.

The buttons on the top of the stick are too small, and the novel fan arrangement of them puts them too close together. This make it too easy to hit the wrong button.

If you play a lot of flying games on your Xbox 360, then the Cyborg F.L.Y. 9 is probably the best flight stick out there right now.

However, if you’re an occasional console flier, then my advice would be to wait for the next version. We’re moving in the right direction when it comes to sim-quality flight peripherals for the Xbox 360. We’re just not quite there yet.