If you read my review of the “old” X52 (SimHQ review link), you know I really like it. Er, make that past tense. I really liked it. Now I’m only sort of fond of it, as I’ve played around with the X52 PRO for a few days.

Without covering too much old territory, a Hands On Throttle And Stick allows one to use the keyboard as a space holder more than an interface device. With a bunch of programmable buttons on both the joystick and the separate throttle unit, one can adjust settings such as gear and flaps as well as select weapons, communicate with AI wingmen (by programming dialog tree commands), etc. The X52 PRO, like it’s predecessors, is non-force feedback.

I don’t know why I bought the X52 PRO; it might have been an inherent need to keep Capitalism going, the irresistible allure of a banner ad, the words “metal” and “improved,” or the fact that I had a little money on the side that fit the price pretty much exactly might have prompted me to make the purchase. Besides, the wife was very adamant that I had bought enough computer stuff “this year” and asked for a solemn vow from me to knock it off already. Of course I raised my hand and swore not to buy any more computer stuff “this year.” On the 28th of December, it’s not a hard promise to make.

I must say that I am very pleased that I made this a New Year’s Day purchase.

If you liked or loved the X45 and X52, you’ll be impressed in a new, even better way with the X52 PRO. The craftsmanship is superior, the controls are more precise, and it just feels like one is in more positive control of his virtual aircraft. Even though the stick is much stiffer in resistance, it is smooth (thanks to a metal cup at the bottom that reduces the friction of plastic on plastic of previous models) and not at all fatiguing. They got the tension just right, and a light touch is still possible without having to “two finger” the control at the edge of a stall; similarly, I never feel like I’m wrestling to move the stick back and to the side when performing a roll. When the stick reaches center, it stays there — no rebound. For those with “wobble” in some planes in the IL-2 series, this could be the solution.

They definitely got the name right. This is the “Professional Grade” model of the X52, with the hardware designers really going the extra step to make it exceptional. If it were a car, the PRO would be the Shelby Cobra to the standard X52’s Mustang GT.

Improvements Over the X52

Saitek took to heart the comments that the stick was too soft in the joystick spring, and placed a second, smaller one around the shaft that leads from the base to the stick.

A far more elegant solution than cutting up a milk jug cap or CD dust cover lid (which is a common “mod” for the X52), the stick is positively beefy now. I disabled the “twisty stick” function by pulling out the familiar stop tab, but suspect that the solution of one problem (the overly light touch of the stick) will now bring another (unintentional twisting) to those without rudder pedals.

Early X52 units had a dead zone problem with the sticks around the center; I was fortunate enough not to get a model with it (or so crappy a virtual pilot not to notice if I did). However, dead zone issues crop up with the X52 from time to time and from unit to unit. With the improvement of the “no touch” sensors, Saitek claims that the dead zone was removed from the firmware entirely within the PRO and will not be an issue at all. When I went into the IL-2 controls section, I noticed that the joystick was dead center with both squares in the X/Y axis area. My X52 was always a little offset (so maybe I did have some dead zone). I know that the darned thing sure feels more steady — but that might be the springs talking. It’s precise, though, in all axis and along all the dials and sliders.

Looks shouldn’t matter, but with one exception, the PRO model looks better than the standard X52. The blue LED’s have been replaced with green ones, and the throttle is now lighted along its base — green to 100%, red if one goes past it into WEP or afterburner. Finally the LED’s brightness has a full slider in the “properties” section of Windows Control Panel. The “interactive Multi-Function Display” (iMFD) area has been recessed and functional scroll wheels placed on either side for additional options. It’s easier to read, but no longer supports a coffee cup. As one can see from the picture, several wheels have been replaced from plastic to metal. 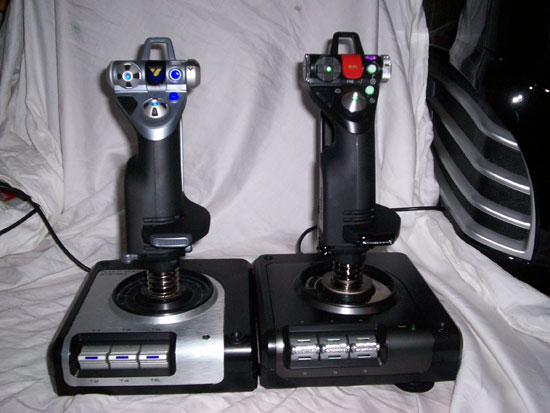 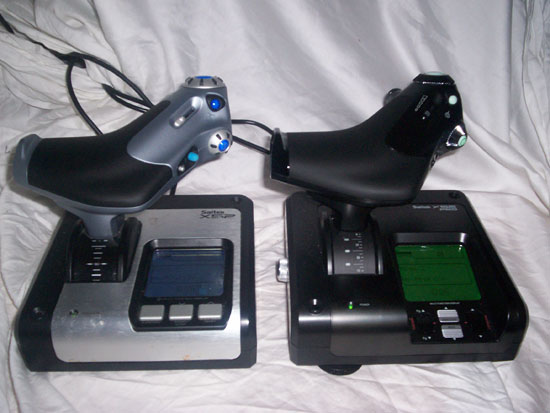 The exception is the “safe” flap that covers the top center button on the joystick. They’ve replaced the clear blue one on the X52 with an ugly solid red one that allows the word “FIRE” to glow through it. No doubt it is made of the same material as the old one, but it looks cheap and out of place against the rest of it.