I need more buttons. Have you ever had that thought before? Ever wished you didn’t have to remember what the key combination Shift-Ctrl-Alt-k does? Are you tired of reaching for an awkwardly-placed keyboard while simming? Simulations are notorious for requiring large numbers of key commands, and the burden of remembering them all is placed on the user. Over the years there have been a few devices aimed at alleviating these problems, originating with the do-it-yourself “bashed keyboard” (tearing apart an old keyboard and re-locating specific keys in a new orientation) and the purpose-built Masterpilot MFD system, and winding up today with the CH Multifunction Panel.

When CH announced the Multifunction Panel (hereafter referred to as the MFP) last September, they departed significantly from their other controller offerings. Unlike with their well-known joysticks, yokes, throttles, and rudder pedals, CH has adapted the MFP from what was originally a non-CH product, the Ergodex DX1. CH has partnered with Ergodex in order to better adapt the product for use by flight simmers. This use will be detailed later in the review, but the MFP can also be of benefit to a myriad of other types of software, such electronic drawing programs (e.g. AutoCAD), graphics programs (e.g. Photoshop), etc.

So what exactly is an MFP? It’s an 11” x 9.5” box that slopes from about 0.5” high to 1.25” inches high, presenting a slightly angled surface to which up to 50 buttons can be attached. A standard MFP is shipped with 25 buttons, and an additional 25 buttons may be purchased. The buttons can be attached anywhere on the clear plastic key tray that attaches to the top surface of the MFP, and the buttons can be removed and repositioned any number of times. A graphical insert can be placed under the plastic tray in order to provide a background image and/or to label buttons. The MFP connects to a computer via USB. 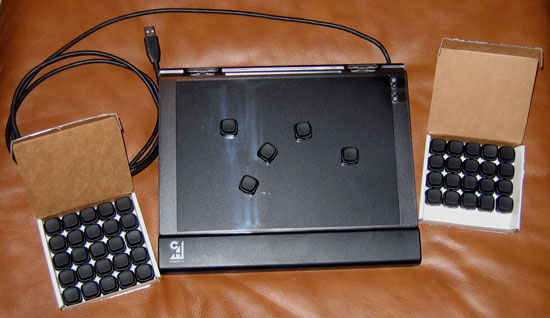 Like the DX1, the buttons can be placed anywhere on the “active surface” of the MFP, and programmed to emulate keystrokes or macros. Unlike the DX1, MFP keys are programmed via CH’s Control Manager software (for those unfamiliar, Control Manager is CH’s controller programming software, akin to Thrustmaster’s Foxy or Saitek’s SST). The fact that the MFP ties in with Control Manager makes it a vastly more powerful controller than a DX1. For example, a CH MFP can do the following:

The differences between a standard DX1 and an MFP exist because the MFP uses different firmware from a DX1. Unfortunately, this means that DX1 keys will not work on a CH MFP. However, the different firmware does mean that the MFP overcomes the DX1’s most serious limitation: unlike the DX1, more than one MFP can be connected to the same computer. In fact, if you’re feeling crazy, up to 16 MFPs will function simultaneously on a single system.