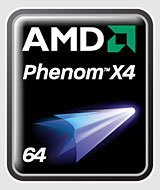 Launched late last year, AMD’s new Phenom CPUs hit the market with something of a thud. Touted by AMD for months prior to the launch as the first true desktop quad-core processors, parts that would outperform Intel’s design of slapping two Core 2 Duo CPUs onto a single package, the Phenom line arrived late to market and resoundingly failed to live up to expectations. AMD had for years enjoyed a rather dominant performance position over Intel with the company’s Athlon 64 CPUs, and the new Phenom architecture boasts a smattering of design improvements intended to boost performance over the A64s, such as a new SSE engine, improvements to the integrated memory controller, and faster floating point performance; yet the initial Phenoms shipped with disappointing clock speeds and the infamous TLB (translation look aside buffer) bug or erratum, and with performance that simply couldn’t match Intel’s initial Core 2 Duo design, let alone the new 45nm-based Penryn CPUs.

AMD seeks to remedy this situation today with the launch of the Phenom X4 9850, the highest-clocked Phenom to date that sports a 2.5GHz frequency and, as part of the new Phenom 50-series, is derived from a new ‘B3’ stepping that sees the TLB bug fixed; AMD has created the 50-series as a way of clearly delineating the new B3 stepping-based CPUs from the original Phenoms. AMD also used the new stepping to include other improvements, such as a faster memory controller for the X4 9850, which runs at 2.0GHz over the other Phenoms’ 1.8GHz speed. The rest of the technical specifications remain the same for the Phenom quad cores: 463 million transistors, 512K of L2 cache per core, 2MB of shared L3 cache, a 128-bit wide memory controller, and support for DDR2 up to 1066 MHz speeds. The X4 9850 has a TDP rating of 125W compared to a 95W rating for the 9600, something that does not bode well for AMD’s ability to scale this architecture very far while still using their 65nm process. Last, the X4 9850 is a “Black Edition” part and as such ships with an unlocked multiplier intended to broaden its appeal with the overclocking community.

The new Phenom 50-series lineup lists as shown below, with pricing set at 1KU and availability immediately following today’s launch according to AMD:

For performance comparison purposes we decided to pit the X4 9850 against an upcoming Intel quad core, the Q9450.  This part will sport a 2.66GHz clock speed and the typical trappings of Intel’s Yorkfield quads (12MB of L2 cache, 1333MHz FSB) and is expected to have a MSRP of roughly $330 once it ships. Unfortunately, Intel is not yet sampling this CPU so we took our QX9650 sample that SimHQ reviewed and set it to a clock speed of 2.66GHz. The X4 9850 is a 200Mhz speed jump over the 9600’s 2.3GHz, so we’ll also include the older Phenom in our testing to see what performance gains are wrought from the new stepping and its higher clock speed.

All testing was conducted on a clean install of Windows XP Professional x86. The test systems used the following components:

The latest BIOS and chipset and add-in component drivers were installed. The NVIDIA control panel was set to application-controlled for both anti-aliasing and anisotropic surface filtering to disable both features, with high quality filtering used throughout all testing. FRAPS 2.9.4 was used to record frame rates for applications that do not produce their own performance results. And the following list of synthetic applications and game titles comprised SimHQ’s benchmark suite for this article: