As is well known by now, the list of improvements AMD made to their micro architecture going from Athlon to Phenom was not as impressive as Intel’s updates moving from NetBurst to Core. AMD parts also currently lag a generation behind Intel’s on the fabrication process front and despite being “true” quad cores (AMD’s words, not SimHQ’s) the Phenom line has been unable to compete against Intel’s Core processors. AMD hopes to change this up a bit with today’s announcement of the Phenom X3 tri-core lineup, a new series positioned for the company’s mainstream Cartwheel platform and seeking to market itself via price and availability as offering end users an additional, essentially free, CPU core. 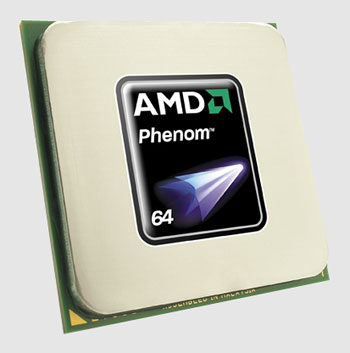 Dry tech specs aside, the Phenom X3s are interesting parts to release in a binary computing world. Increased performance usually arrives in numbers divisible by two: processing cores, multi-GPU solutions (well, most of the time), DIMMS, SPUs, etc. And this oddness manifests itself in compatibility issues with certain software. For example, AMD informed us that Microsoft’s Windows Media Encoder, which SimHQ has used since 2005’s advent of multi-core CPUs, fails to recognize a third core, and even Windows Vista (32-bit) has issues when it comes to recognizing, and utilizing, the third core. These software kinks will most likely be worked out over time, but early tri-core adopters need to be aware that they exist and cannot at this point be comprehensively documented.

All testing was conducted on a clean install of Windows XP Professional SP2. The test system used the following components:

Readers will notice the lack of an Intel CPU for our testing and this is simply because we do not currently possess a Core 2 Duo processor that is priced anywhere within even remotely the same price range as the X3 8750’s sub-$200 pricing. SimHQ requested an E8300 from Intel but they were unfortunately only able to supply us with an E8500, which is priced a full $100 higher than the Phenom X3 8750 (and possibly higher, with availability being so poor at the time of writing). Because we simply are not willing to place performance numbers side-by-side for parts with such disparate pricing and because AMD has positioned the X3 processors as belonging to their mainstream Cartwheel platform, we therefore decided to pit the X3 against a Athlon X2 CPU using a 780G mainboard so that current AM2+ socket owners considering an upgrade can evaluate whether or not AMD’s new X3s may be a viable upgrade path to pursue. For these reasons we also decided to use the Radeon 3870 graphics board rather than the considerably faster GeForce 8800 GTX used in other recent SimHQ hardware articles; much ado has been publicly made in recent weeks over what constitutes a balanced system, so we decided to avoid pairing a high-end GPU with mainstream CPUs. The 95W TDP rating should allow for decent motherboard compatibility, but we suggest readers check here first before making any purchase decisions.

The latest BIOS and chipset and add-in component drivers were installed and all test applications patched. The Catalyst control panel was set to application-controlled for both anti-aliasing and anisotropic surface filtering to disable both features. FRAPS 2.9.4 was used to record frame rates for applications that do not produce their own performance results. And the following list of synthetic applications and game titles comprised SimHQ’s benchmark suite for this article:

SimHQ’s CPU testing now consists of essentially two categories: low and high. The low category uses a low resolution, typically 800×600 if supported by the application, combined with low in-game settings, and the high category uses a resolution of 1280×1024 with higher, more demanding settings. The first category is intended to allow the CPUs to differentiate themselves in their performance scores without other subsystems, such as memory or the GPU, becoming the bottleneck, and the latter category is meant to better reflect actual real-world usage of such parts. For the purposes of this article and the mainstream parts used, however, we avoided maximum settings for the high category and generally employed a medium-high approach. Details per app can be found in the test results section below.