AMD launched the Radeon HD 4800 series last summer to great reception. Based on a smaller GPU than NVIDIA’s offerings at the time, AMD was able to aggressively price their new graphics boards and force their competition to repeatedly respond in turn. This January NVIDIA did a 55nm die shrink on their GT200 chip and released it as the GeForce GTX 285, strengthening their position as the company with the fastest single-GPU solution. The die shrink allowed for slightly higher clock speeds, and also lower initial pricing compared to the exorbitant $600+ sticker of the GTX 280 last year. Today AMD is responding with the Radeon HD 4890, the newest addition to the Radeon 4800 series.

The Radeon HD 4890 is essentially a minor update to last year’s RV770 GPU. The new chip has a slight transistor count increase of 959m, up 3m over the initial RV770, and therefore also has a slight die size increase. This change is due to a decap (decoupling capacitors) ring AMD added to the GPU for this re-spin to enable higher clock speeds by reducing signal noise. AMD also claims to have “re-timed” the GPU and adjusted its power distribution, both tweaks aimed at improving clock speeds. As a result, idle power consumption for the new Radeon is down compared to the 4870, while load consumption is naturally higher due to the faster clock speeds. Last year’s Radeon 4870 had a core clock speed of 750MHz and the new 4890 sports a frequency of 850MHz. Interestingly enough, a lot of the board partners will be shipping cards with even higher speeds, and the review sample SimHQ received has a core clock of 900MHz.

SimHQ decided to test the new Radeon against last year’s HD 4870 1GB and NVIDIA’s GeForce GTX 285. All three are 1GB boards and the latest Radeon and GeForce cards represent the current fastest single-GPU solution from either graphics firm. The specifications for all three test boards are listed below: 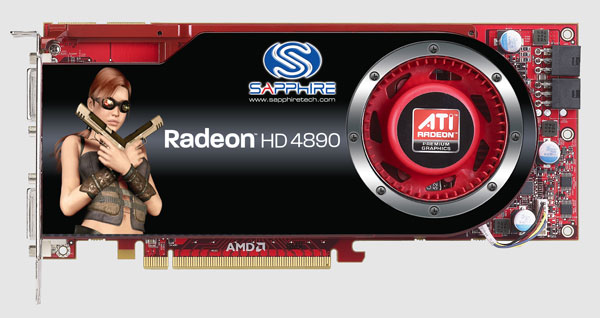