Aviation exhibitions are funny places. One never knows what hidden treasure lies buried in one of those vast exhibition halls. The exhibition was Aero 2010 in Friedrichshafen.Friedrichshafen is a small town on the shores of Lake Constance, peculiar, yet wonderful place, with three countries mixing their borders in different combinations (Germany, Austria and Switzerland).

Aero Friedrichshafen is a major European show for general aviation — from hang gliders and light aircraft, to majestic business jets of all kinds and sizes. Diamond was also displaying their new flight simulator for the DA-42, which of course was tried and tested, but this toy is out of range of the average simmer, and besides — it is not meant for fun, but for serious training work.

In one of the neighboring halls (which by the way, had the motif of giant aviation hangars), there was another company, exhibiting something, which, in sharp contrast with Diamond’s offering would actually be within shooting range of — let’s put it this way — theenthusiast flight simmer.

SimAviatik is a Swiss company specializing in low-cost simulators, aircraft shells (not real ones of course, simulator shells), 2, 3 and 6 DOF platforms, different components of hardware for simulator consoles such as yokes, rudders, instrument panels, and throttles. Long story short — everything a simmer would need to build a sim cockpit. But at Aero 2010 they were not exhibiting A320 or B737 cockpits, they were showing cockpits for the “a sim without shooting is no sim” crowd. They were showing their P-51 and Bf-109 cockpits!

Michael Weber of the SimAviatik was kind enough to give me a brief demo and let me try the thing for myself. He told me, that they also have an F-16 cockpit, but unfortunately they didn’t bring it to the show. First, I chose a flight in their P-51, since it was running with IL-2.

The cockpits are well build and sturdy. Entrance is from behind, making access easier.

All the cockpits are pre-fabricated, but SimAviatik will be happy to customize one for you. For instance — one of the possibilities is an optional canopy. The instrument panel on older models is different from the new ones. Namely on old ones instruments are electronic, and they are programmable — depending on the customer’s wishes, the cockpit can represent any WWII warbird. Purists will definitely not go for that option, but rather for the new concept, where the cockpit is filled with replicas of real backlit instruments. But that’s not all. The control stick of course works, as are the throttle and all other levers and switches in the cockpit. The fun doesn’t stop there though. As you can see on the photos — even the aiming reticle is fully functional, together with the distance regulator. 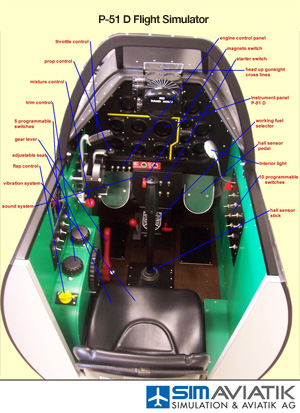 I saw on their promotional material that the Falcon’s cockpit is also equipped with a HUD. I asked Michael with skepticism, “…and the HUD in the F-16 is also functional I presume?” His answer is going to cause many wet dreams… “The F-16 HUD is dependable on the version the client orders, but they go up to full realism.”  You’ve got that right. You can sit in an accurate F-16 cockpit and have the full fidelity HUD. Add an overhead video projector to a slightly-curved screen in front, and you have suspension of disbelief so far reserved only for the military guys. Anybody who has ever tried a high-fidelity military or civilian simulator knows what this means. Even the basic setup I was testing in Friedrichshafen — the P-51 cockpit with a large LCD monitor serving as our window into the world — was enough for me to become lost in time.

With the cramped feeling in the confined space of a WWII fighter cockpit and to fight in the crowded skies, one quickly starts to respect the pilots of that era even more. Physical borders of the cockpit (and canopy) add tremendously to the completely new experience with such an old timer as the venerable IL-2 Series.

But the cockpits are not dedicated to one flight sim title. The software running under the hood can probably work with any sim you can think of using. On the show floor cockpits both FSX and the IL-2 Series were being displayed. Should the mapping for your favorite title not work, the SimAviatik team will step in to help.

Cockpits of the P-51, Bf-109 and Jet Ranger are made of wood and covered with aluminum, and look just gorgeous. Just like the real birds. The F-16, B-737, A-320 and Jet Ranger Pro are made of fiberglass and steel. The cockpits themselves are of course not 100% replicas, otherwise the price tag would go sky-high. Some parts are simplified, as for instance flap controls and some instruments, but this doesn’t diminish at all the sense of “being there”.

And for what you get, it is not that expensive either. A basic setting can be yours for 5000 € ($6650 USD). Adding the canopy and other goodies can rise the price tag up to 8000 € ($10,630 USD). Is it worth it? Well, if you are thinking about building your own cockpit to this level of detail and have plenty of time on your hands, then you might have second thoughts. But for the rest of flight sim fans, this is one of the most desirable pieces of hardware imaginable. The sense of being in the middle of the battle in that confined space is just unbelievable. Added to that the ever-falling prices of projectors and superb before and the after-sale support from the SimAviatik team, you can have almost the real deal in your basement, spare room, or wherever is your FBO.