1994 was a big year for me. I got my first PC in the summer of that year, something I had wanted for a long time. Before that point I did most of my electronic gaming on consoles, and just a bit on my TRS-80. Programming in BASIC on that TRS-80 (and learning that lots of the programs I wanted to buy required an IBM compatible) was what made me want a DOS/Windows PC.

The first software I bought for my 486 SX2 was Microsoft’s Flight Simulator 5 for DOS. A $10, 2 button joystick from the Mom and Pop computer dealer (remember those?) came shortly after I realized that the keyboard wasn’t the best way to fly. 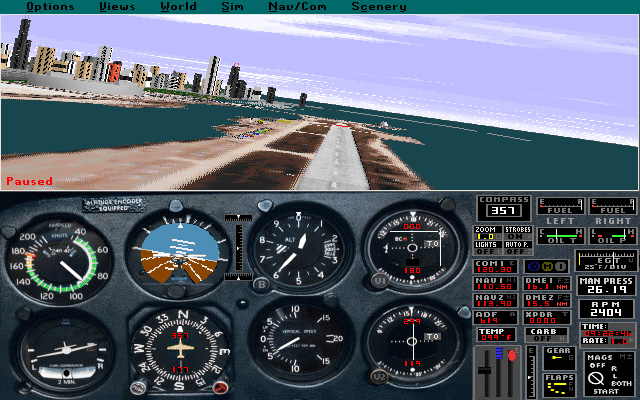 And I had a great time with MSFS5. Flew it for several years, learning much of what I’ve carried forward into later flight simulators. But those flight simulators were MUCH later. I soon became distracted with desktop publishing and photo editing productivity applications, and spent less time with PC games. Besides, I was more interested in my console gaming at that point. It wasn’t until 2001 when I bought IL2 that I returned to simulations.

So a decade passes by and I’m still enjoying simulations. From rFactor to ArmA2 and lots in between. And of course MS Flight Simulator still among them. Taking some time to look back over the history of simulations, I came to realize that there were many great titles from the DOS era that I completely missed. 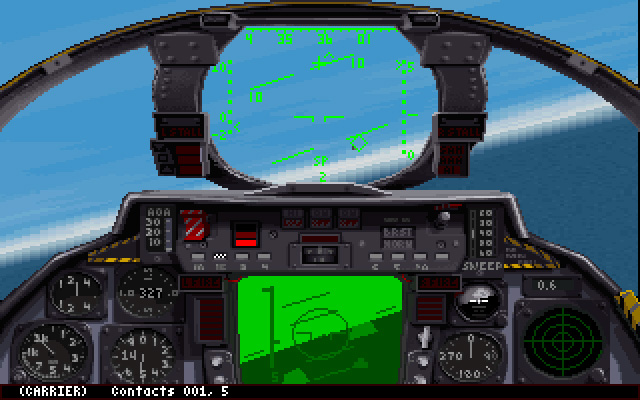 MicroProse’s F-14 Fleet Defender. The first flight sim capable of sending a Phoenix to the bad guys 100nm away.

My first experience with DOSBox was when I bought X-COM UFO Defense from Steam, during a holiday sale. I did some investigation and downloaded the standalone DOSBox application to experiment.

DOSBox is a free and open source emulator, that behaves much like a PC running MS-DOS. The aim of the project is running DOS games, so there are things like printers and networking which are reportedly incomplete (I’ve not tested these things).

The DOSBox web site is here, and the DOSBox wiki is here.

The DOSBox interface is a command prompt similar to MS-DOS, and many of the old MS-DOS commands work the same. 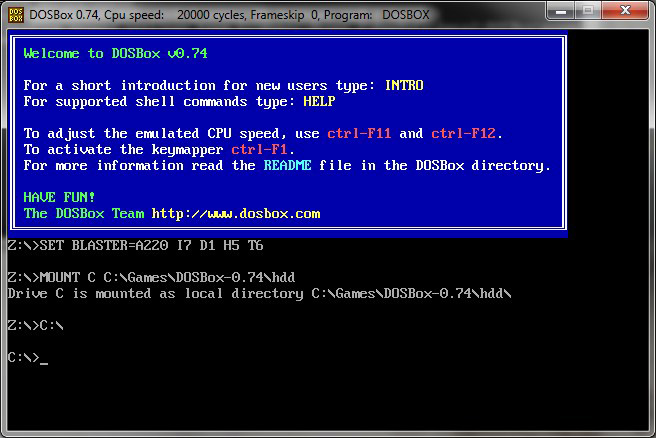 What’s nice is that DOSBox is a modern Windows program (so no need to reboot or leave Windows), and operates in a sort of “fish tank”, so that the C:\ drive is “trapped” in the directory you specify. Any software installation or saved files will go in a structure inside this boundary. A bit like a “virtual machine” works.

As a bonus, DOSBox allows my modern USB joystick and Saitek X45 HOTAS to work in these older DOS games.

I pulled my old software media cases out of the closet, 3.5″ floppy bins and CD-ROM clamshells filled with stuff from the mid 1990s. I also found many of my old user manuals which I had kept. Some of these titles had never been installed, something I’d been gifted or just never had the time to look at back then. I also had to get out my long since mothballed 3.5″ floppy disk drive and connector cables.

After installing DOSBox, the first thing I did was decide on a directory structure. I chose to create three folders called “hdd”, “fdd”, and “cdrom” to contain the types of data each is named for. The “hdd” directory is the virtual “C:\” for my DOSBox, and all my software installations and saved files are here.

These locations have to be “mounted” by DOSBox before they function. In other words, specified to be where file read and write operations will be occurring. Details on these commands are available at the DOSBox wiki site.

You should be careful NOT to set your actual C:\ drive to be the DOSBox C:\ virtual hard drive! This is reported to do bad things!

Next I edited my edited my dosbox.conf file so that my “hdd” subdirectory would be “mounted” every time I start DOSBox. A nice time saver. As an example, the command line I used for mounting my preferred directory is:

At this point, installing my old games from my diskettes and CD-ROMs was easy, and works for all appearances just like DOS did back in the day. I was even able to install and run my Windows 3.11 floppies, though running Windows and it’s games are not a DOSBox priority.

Each game ran fairly well, though sometimes things were obviously a bit sluggish. This was especially notable when running dense 3D scenery in MS Flight Simulator, and when loading large game data and save files. By editing my DOSBox settings I was able to improve my games performance. 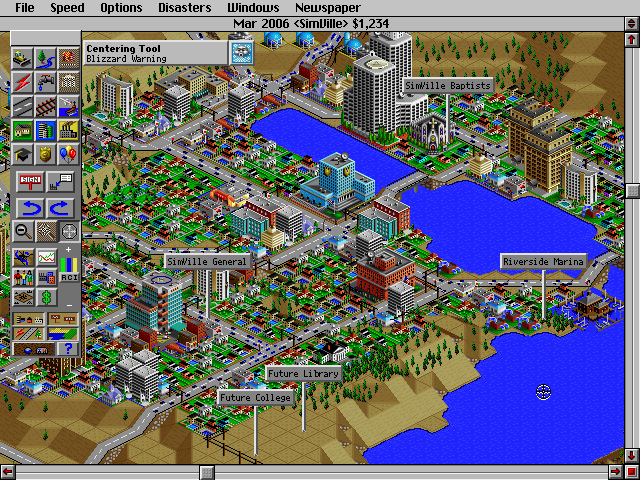 The most noticeable improvement came by increasing the default “CPU cycles” setting. This starts at a pretty low value, something around 3,000 by default. This value can be increased and decreased “on the fly” by pressing some hotkey bindings (CTRL+F11 and CTRL+F12). You can do this and see the performance change in the game. Occasionally I would notice problems as I moved the setting very high, most often some graphic tearing and sound stutters. But there was a sweet spot on my machine (AMD A64 5000+ X2) of 20,000 cycles. Again I put this value in my config file so it’s the default when DOSBox starts:

Running at this speed on my machine provides fluid gameplay, even in complex 3D scenes. The simulations also appear to run at the correct speed, with no signs of mission clocks or timers running obviously fast. 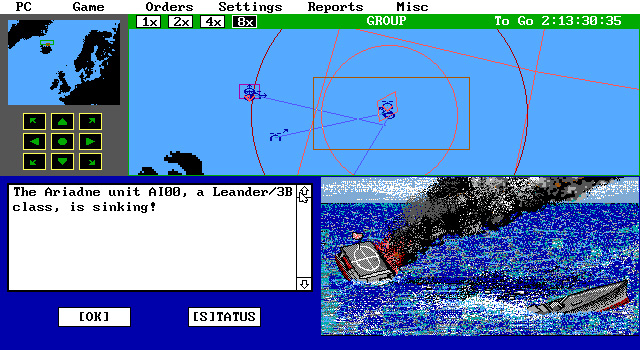 As mentioned, DOSBox allows use of modern USB joysticks and controllers with these old titles. I have a Saitek X45 HOTAS which required some changes to the config file to perform properly. These changes are listed below:

The first lets DOSBox know my HOTAS stick has more than 2 axes, and the second was needed because my throttle and rudder axis were reversed in my games.

DOSBox includes a key mapping system that lets you assign actions to keys on the keyboard or joysticks. The UI isn’t very user friendly in my opinion, and I was not able to find any options for saving and loading multiple mapping configurations. It’s also possible to have multiple events bound to a key or button without realizing. However, the key mapper is functional, and I was able to configure my X45 for many of the required keystrokes for even more complex titles like Fleet Defender. Results in game were excellent. 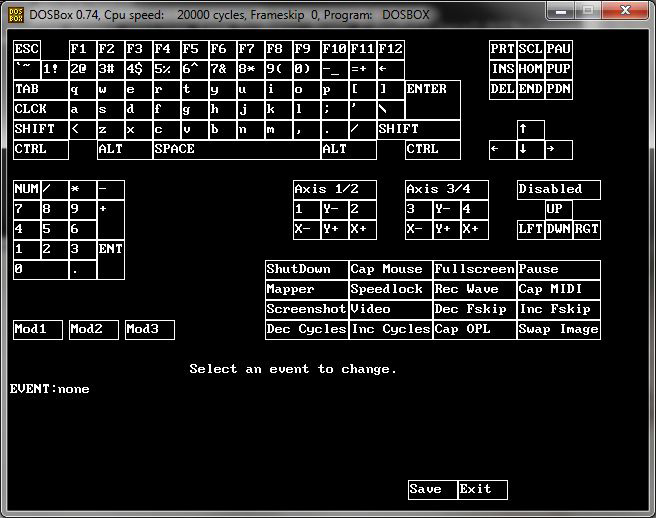 Most players however, will have drivers for their controller that allow easier creating and swapping of binding loadouts outside of DOSBox. This approach will likely be the preferred choice. Remember, many DOS games (at least those I own) don’t allow changes to the keyboard or joystick bindings. So for maximized controller functionality, one of these options will be needed.

I’ve installed many of the old titles I own, including:

Each of these titles has worked very well, allowing fluid gameplay and game data save/loads. I have yet to suffer a crash in any of my DOS games. There is a list of titles at the DOSBox web site covering compatibility. Graphic performance with my modified settings is very good, much faster than my old 486 hardware ever was. Sound has worked well too. On my system, a setting of 20,000 cycles is very speedy, and I see no graphical artifacts or sound distortions.

I’ve used my X45 HOTAS in MSFS 5.0, Fleet Defender, and the F-117 demo, and with the configuration changes mentioned above, it has been detected, calibrates, and works as expected.

I am enjoying my time with these old sims, great software I missed for one reason or another back when they were new. Playing “Harpoon”, something I picked up years ago and never played, is a real challenge and quite enjoyable. “Fleet Defender” is one I actually bought used through the SimHQ Buy/Sell/Trade Forum (that is available to registered SimHQ members), complete with the manuals. I’ve put a few good hours into these fantastic sims, and they will keep me busy for a long time.

You can find many titles at GOG, and there is a wealth of historic information on titles at MobyGames.

For someone who played these older sims to death, there may not be anything of value here. But for those interested in revisiting, or who have never played some of these DOS titles, DOSBox makes it possible from within a modern Windows OS and enables use of modern USB controllers.

Hard to beat that!

Simming at Sea: A Tale of Heartbreak and Resurrection

Simming at Sea: A Tale of Heartbreak and Resurrection Page 3

Simming at Sea: A Tale of Heartbreak and Resurrection Page 4

Simming at Sea: A Tale of Heartbreak and Resurrection Page 5

Simming at Sea: A Tale of Heartbreak and Resurrection Page 6