Like the wheel housing, the T500 RS’s wheel is also as big as Texas. While Thrustmaster claims the wheel rim to be 12 inches (30cm) in diameter, my tape measure shows it to be 11.5 inches, which is exactly the same as Fanatec’s Porsche Turbo S wheel. That said, the wheel looks wider due to a thinner diameter rim, and also features nicely finished, brushed metal spokes in basic black.

The wheel’s textured rubber grip is not as luxurious as the leather or alcantera-wrapped G25 / G27 or Fanatec wheels, but the T500 RS feels more solid, like a real street car’s wheel. The wheel itself is also detachable from the housing unit, supposedly to allow for future upgrades. 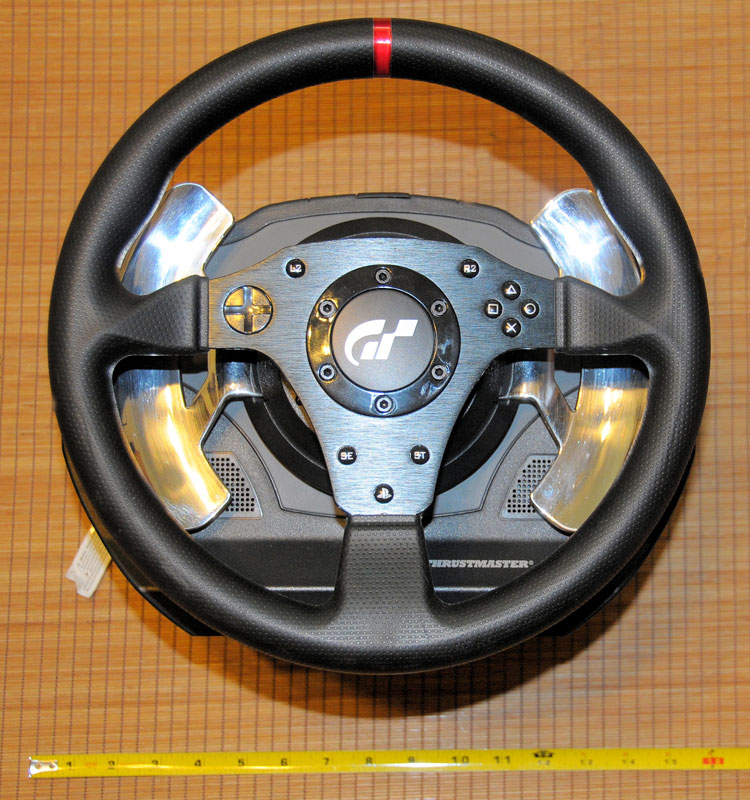 In motion, the T500 RS feels very sturdy and smooth. With a larger housing, it feels as though the components inside are stronger and larger as well. This would make intuitive sense, as I have heard from wheel developers that the larger the wheel’s diameter, the greater the loads placed on the internal components. Like many current-gen sim controllers, the T500 RS dispenses with mechanical potentiometers that quickly wear out, and goes instead with contactless magnetic Hall Effect sensors, called H.E.A.R.T (HallEffect AccuRate Technology™), that theoretically do not wear out. Thrustmaster claims this makes the T500 RS an ultra-precise wheel, endowed with 16-bit resolution, or 65,536 discreetly measurable steering values. In a strange battle of one-upsmanship, Thrustmaster has raised the bar for total wheel rotation angle, giving the T500 RS a max adjustable angle of rotation of 1080° (3 full turns of the wheel).

You know what they say: Big housing, big wheel = big FFB motor. Or something like that. The T500 RS makes use of a 65 Watt industrial motor driving two belts at up to 3000 rpm. Thrustmaster claims this gives the T500 RS “fluid and smooth” FFB action, and I have no reason to doubt that claim. Even though the FFB is powerful, the T500 RS is the one wheel that I enjoyed having FFB set to “Full” in rFactorbecause the delivery is so smooth and progressive. It never felt like the wheel was about to be jerked from my hands. Even with the FFB strength set to the default 60% on the T500 PC Driver Interface, and 65% on rFactor’s force feedback settings, the wheel’s FFB response was very powerful. The forces exerted made the game feel more like a real car than anything I’ve ever tried. Typically when you can crank up the FFB level on a sim racing wheel, it just feels like more force, and often the outputs get a little harsh and abrupt. Not so with the T500 RS, which has very smooth FFB output rates that add to the immersion of a racing sim.

As mentioned above, I tried putting rFactor’s FFB effect fidelity on “Full”. Normally all that Full really adds is an engine vibration to the wheel. In other wheels, this engine vibration presents itself as an irritatingly jerky wobble or shake that feels nothing like an engine. But with the T500 RS, the wheel purred like a cat, and when driving at speed the sensation conveyed a feeling of being in touch with the road and the car’s vibrations, even if the feeling is completely artificial.

Thrustmaster has also clearly found a way to minimize the need for on-center reduction in FFB strength necessary to prevent divergent wheel oscillations (felt as a softening of FFB outputs when the wheel is nearly centered). This giving the T500 RS more consistent rotating resistance all from lock to lock which feels very good indeed. When driving straight, there’s no backlash from the FFB system, giving the wheel a very realistic feel.

After just a half hour of driving, the wheel’s cooling fan kicked on. It’s a loud fan, much more so than anything on a Logitech or Fanatec wheel. Then again, this wheel is clearly packing a heavier punch in terms of FFB and vibration strength than its competitors and no doubt generates a lot of heat during a gaming session.

T500 RS has one shining set of features that raise the bar for sim racing: the wheel’s rotating parts and FFB system are nothing short of superb. There’s something intangible about the way the T500 RS feels in operation. Thrustmaster says it captures the ‘inertia’ of driving a car. And that might be the best way to put it. The depth of FFB effects and the smoothness of the T500’s wheel action easily eclipse Logitech and Fanatec’s current offerings. It’s hard to put into words: simply saying “the FFB is stronger” doesn’t convey the point at all. The force feedback feels like it’s coming from something much larger, something solid and massive. Something like a real car. In comparison, the T500 RS makes the FFB from other wheels feel like they’re coming from something hollow and lightweight. The T500 RS has to be experienced to be understood.

There’s no shortage on the T500 RS, but they are all in the familiar layout of a standard PS3 game controller. There should be no surprise that the wheel is optimized for the PS3, since that’s the wheel’s design platform and it holds the current title of flagship controller for that game franchise. Overall the layout of the T500 RS’s buttons and their distance from the wheel rim are ergonomically sound, as they have the feel of a purpose-built racing wheel. Many of the buttons are intuitively located to where your thumbs naturally reach out, although two of them, located on the lower left side of the wheel housing and behind the wheel rim, are somewhat difficult to reach when driving. The rest give you plenty of options for laying out the commands you’ll need when competing in a racing simulation event.

As I turned laps with the T500 RS, one thing that I found myself wishing for was a set of on-wheel adjustment options. Having the ability to tweak rotation angle, force feedback and vibration strength, and linearity on-the-fly would be very welcome features in a wheel at this price point. 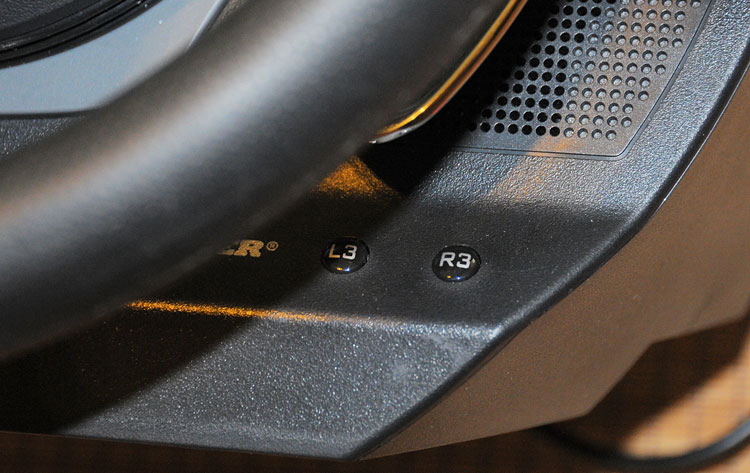