First up was the venerable Enemy Engaged: Comanche vs. Hokum. I tested the Warthog with EECH “All-Mods” V1.12 and continue to be impressed with how far EECH has come. Using the full start-up sequence for the helos requires starting the APU, engaging the starter, and then stepping up the fuel control to IDLE then up to FLIGHT. Mapping these functions to the Warthog throttle base toggles made the startup and shutdown feel more realistic than hunting around for the proper keyboard key presses. I am a neophyte “TARGET” profiling software user, but even I found writing my own profiles to be a simple process. I even managed to figure out how to map switches to result in multiple key presses spanning 12 seconds in the case of the engine shutdown commands. My biggest beef with TARGET is that for already created profiles it would be nice if you could load it up and graphically observe what command is being sent and see the correlating controller switch or button highlighted as you manipulate the controls. 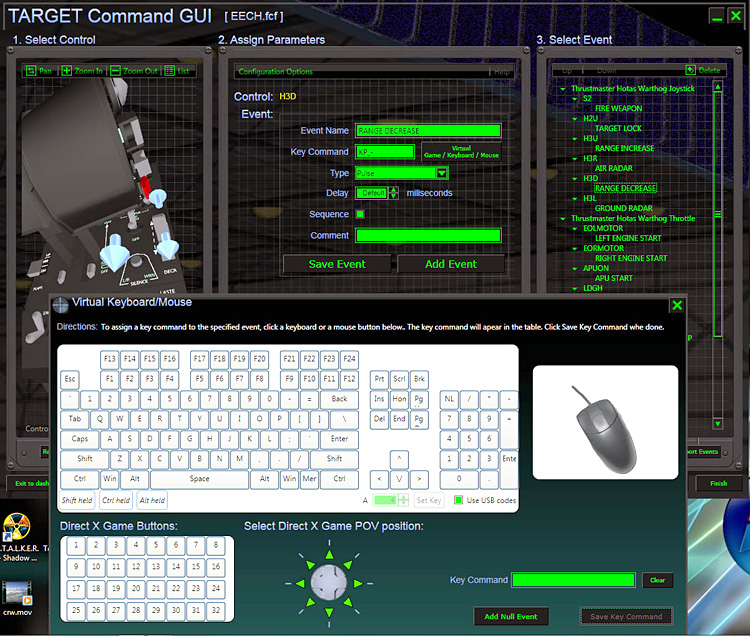 There is a window that you can open that will show you a text command line output of the button presses as they occur, but it doesn’t really help you grasp the relationship between the controller and the commands as easily as a picture would. 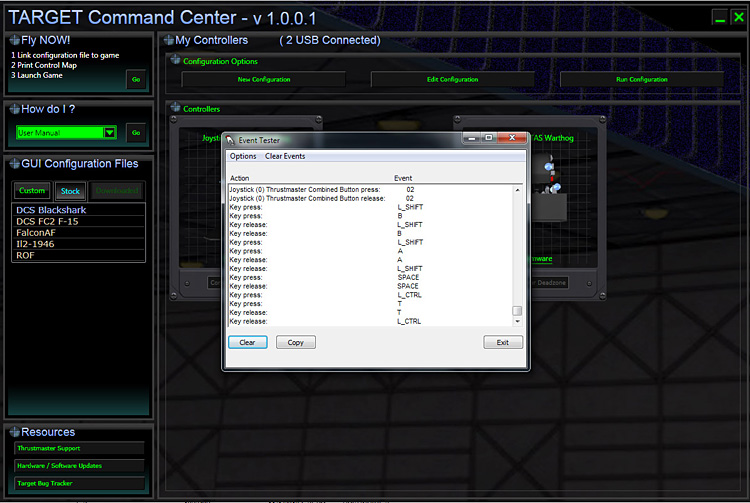 The modded EECH has a fantastic controller setup screen where you can assign the axes and figure out how to best control some other options. The friction control on the throttle that is mapped as a slider would be awesome as an infinitely adjustable electro-optical zoom adjustment (I tried it), however manipulating it requires you to remove your hand from the throttle, something that just isn’t practical on a helicopter. Saitek has a slight advantage in that department with a slider on the throttle that is directly under your thumb. I mapped the sensor pan and tilt to the mini-mouse control on the back of the Warthog throttle and found the response and accuracy to be very good. Overall the mini-mouse on the HOTAS Warthog is much more usable and intuitive to use than the wonky mini-stick on the Saitek. 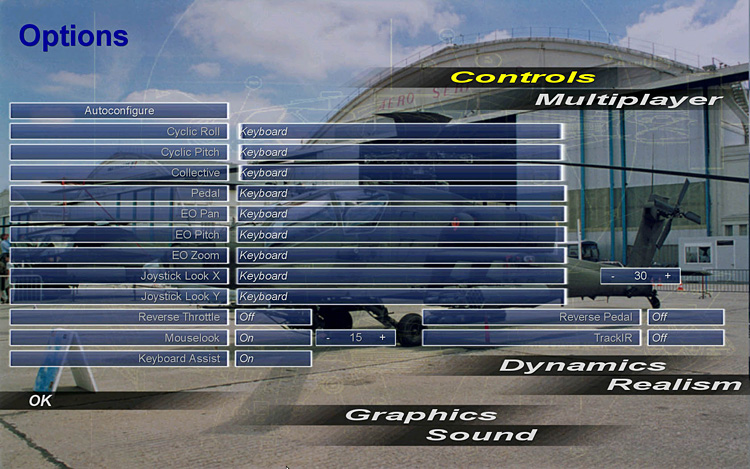 As far as flying goes, EECH has always had a bit of a linear feel to the flight model, so stick response was crisp and precise as one would expect. It is worth mentioning again that in helicopter sims in particular I like the contoured grip of the Saitek throttle, since it is more comfortable for extended gaming. The heft and solid feel of the Warthog stick makes the controllability in every sim feel more authoritative, however.

Next up on the list was Falcon 4.0: Allied Force. This was one of the sims that had an included TARGET profile already created with the software downloaded from Thrustmaster (the others being: DCS: Black Shark, IL-2: 1946, Rise of Flight, and LOMAC: Flaming Cliffs 2 F-15). The HOTAS Warthog performed flawlessly with F4:AF and Falconeers should be excited about this piece of hardware if they are looking for a solid stick with complex programming capabilities. The included profile was good but most people will want to tweak the profile or outright create their own. I set the afterburner detent location within the sim to match the point where one must lift the throttles over the afterburner detent (if you choose to make that hardware adjustment to your HOTAS Warthog throttle) and had no problems at all. It is nice to be able to jam the throttles forward to get to 100% (military) power without having to worry about backing off or glancing at a nozzle or fuel-flow gauge to make sure you aren’t wasting gas. 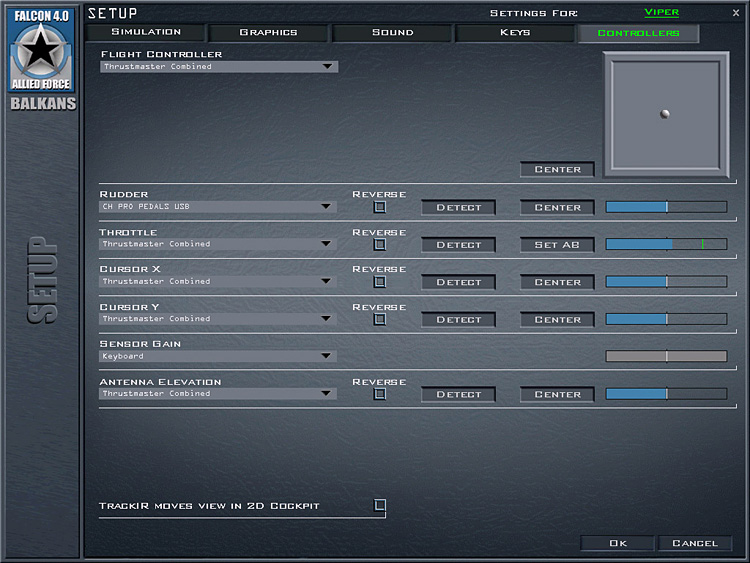 I’m not an F-16 driver in real life, so I can’t really comment on the dead zones, response curves, or any of those other technical details, but once again the HOTAS Warthog has a solid and precise feel underhand compared to my Saitek X-52. I’ve not had any stick time with the Saitek X-65F Pro Flight Combat Control System so I can’t really make any comparisons against Saitek’s latest offering. I really liked the accuracy and response of the throttle mini-stick for manipulating the target designator cursor (TDC) on the radar screen. I’ve never really felt comfortable with the mini-stick on the Saitek X-52, always feeling it was too inaccurate and twitchy. There are no such problems with the Warthog implementation of the mini-stick. As noted before, the toggles under the thumb on the HOTAS Warhog can be quite a reach, particularly the “boat switch” and “China hat”. Modeled to realistic dimensions and response feel, though it is hard to complain.