The literature for Railworks 2 presents gameplay with the phrase “Be the Driver”, where the player will face the challenges an engineer would while operating these locomotives. The user interface includes what is called the “Cab Control” system, the 3D clickable locomotive cockpits, and the keyboard. In addition, the controls can be operated in two realism settings, “Simple” and “Expert”.

The “Cab Control” system is a graphic overlay across the bottom of the screen. Visibility is toggled with the “F4” key, and the control can be used from inside and outside the locomotive cab. The “Cab Control” display is well designed in my opinion, and provides mouse click/drag access to the vast majority of frequently used controls, as well as displays showing information about the route signals, stations, and speeds. 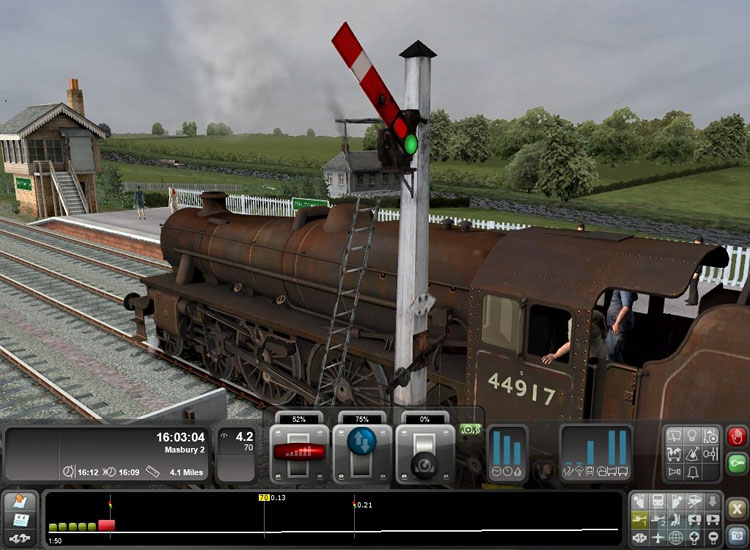 The “Cab Control” system shown across the lower part of the screen.

Inside each locomotive is a 3D clickable cockpit. Using these controls require the player to pan their view so that the desired control is visible (hold the right mouse button and drag the mouse), then click/drag as required directly on the control within the locomotive cab. Most of these 3D clickable controls are animated, and update as they are manipulated. This control method works whether the “Cab Control” display is visible or not. 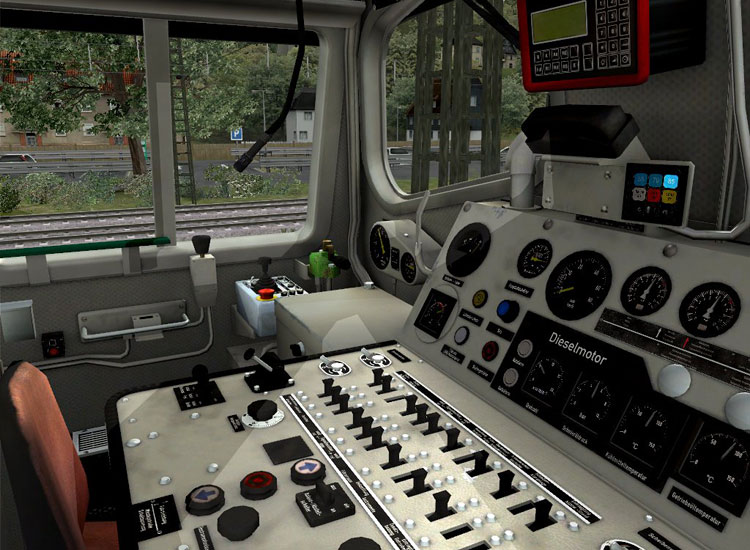 One of the detailed and clickable 3D locomotive cabs.

For those who choose to operate the locomotives using the clickable 3D controls or the keyboard, there is an alternative to the “Cab Control” display, called the “Engine Information” display which provides readouts (in two levels of detail) on the condition and positions of the locomotive controls displayed as percentages. Players who use this control configuration will need to either pay close attention to signal and signage outside the windows as they move past the train (for speed limits, signal status, and distance markers), or else peek at the “Cab Control” display as needed (by pressing F4) if they need this information. 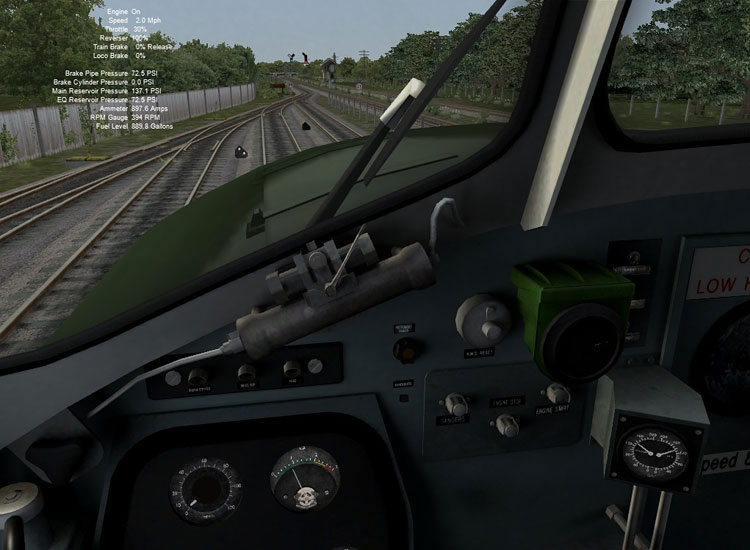 Shown in the upper left part of the screen is the “Engine Information” display.

The gameplay experience was my most important question when sitting down with Railworks 2. Having zero background with railroad simulations I was pleasantly surprised by what I found, in a variety of gameplay modes.

Players looking for a casual experience, something quite like running an actual model train on a scale model railroad layout, will probably be pleased. Using the “Simple” control system gives a train control system that’s much like a model railroad, and the “Free Roam” scenarios are well suited to this type of play since any train on the route can be clicked on to jump to control of that locomotive. A single lever controls the movement of the train (combined power and braking) while a single switch controls the forward/reverse directions. Combining this control mode with the exterior views gave an experience much like driving and watching a model train, with worries no worse than a model railroad… perhaps accidentally derailing the train. It’s user friendly, and even child friendly, a parent and child could easily enjoy sharing this experience together. It could actually be called relaxing, listening to the sounds of the environment while watching the trains. 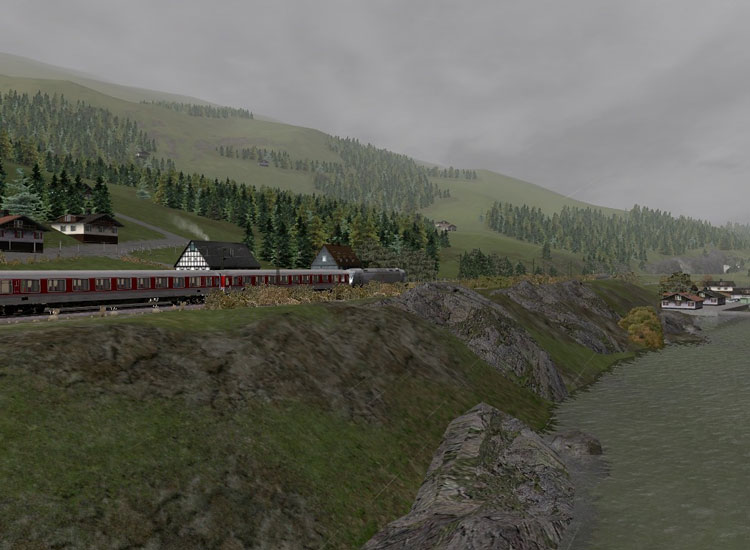 An electric rail passenger route by the sea.

Taking the realism up the scale to “Expert” mode, I quickly found my beginner’s hands full. The steam locomotives are (for me) the most challenging to drive. They have the most variables to monitor, and are the most challenging for me to drive optimally. Even with modern diesel or electric locomotives where the workload is lighter, a close eye on speed limits and experience with stopping the train right where you want it are required.

While playing “Expert” mode with the “Cab Control” hidden (I used the “Engine Information” display instead) and driving from the locomotive cab view, I found the most intensive driving experience. I had to rely on the track signs and signals for speed limit references, and watch my speedometer for indications of the grade. Bringing the train down from speed for stops at stations or signals (without embarrassingly stopping short or rolling too far past) meant keeping aware of my distances and some familiarity with the rail route.

That’s not to say driving these trains is “hard” in “Expert” mode, rather that you’ll profit by buiding up a bit of experience. Once you’ve got a good handle on things, and have learned the route reasonably well, you can dial in your speed, sit back, and take some time to enjoy the scenery for a good part of your trip. Just how much time you spend watching the scenery depends most on how seriously you work to meet your goals in the “Standard” and “Career” scenarios.

Let’s be clear here, Railworks 2 is not an action game. If I dare allow myself to compare the experience to something from the realm of flight simulation (where I have nearly two decades of experience)… I think of when an airliner is set on it’s autopilot course mid flight. I sit back, monitor the instruments, and enjoy the ride. Dot this with the same kind of moments requiring skillful operation of the equipment, and you’ll have, in my opinion, a similar picture of the experience.

The “Standard” mode scenarios give you a list of tasks to perform. Sometimes loading and unloading stock, sometimes making stops along a passenger route, and other time assembling a series of cars in the required order. If you are late to a stop, or take 5 or 6 minutes looking around the railyard for the cars you are supposed to pickup… the scenario doesn’t care. You can play to as high a standard as you want as you move through the tasks.

Playing “Career” mode seriously ups the difficulty by calculating a score based on performance. The timetables can be tight; it’s not uncommon for a passenger line scenario to require getting the train rolling within 1 minute of the scenario starting to have hopes of getting to the first stop with a few seconds to spare. Failing to drive the train as fast as the speed limits allow will very often mean that you are late for the next stop, and quite likely mean late for the rest of the assigned schedule. Since you are also scored on passenger comfort, you’ve got to be careful with tighter corners at speed, as well as abruptly stopping and starting the train, at the same time. For some scenarios, fuel efficiency is also a scored factor. 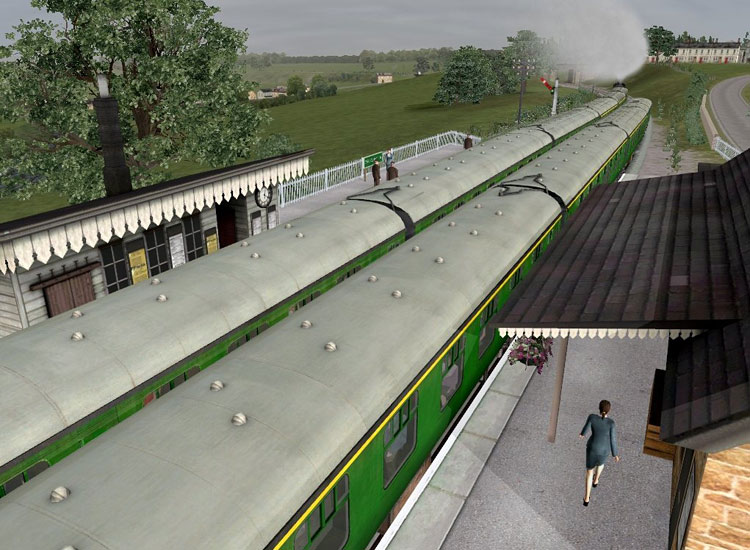 Passengers at the station where steam driven trains punch the schedule.

It’s worth commenting on the structure of the Career mode, as it’s a bit different than I expected. Rather than creating a player “character” which builds some sort of “experience” or “rating” over time as the player progresses, the Railworks 2 system is based on scores for each individual “Career” scenario. Upon completion of a “Career” scenario you’ll see a breakdown of score values for everything that happened during play. Points are added or subtracted from the total, with reasons listed for each scoring. This final score is saved, and shown in the scenario selector as a future target to beat for that scenario, and can be compared to online rankings of other players.

Again, each “Career” scenario is scored separately, so your score for a particular scenario will depend entirely upon your play performance of only that scenario. Given the “build what you want” nature of the Railworks 2 product, this design makes sense, and avoids forcing a player into completing other scenarios (which may not be a primary interest), just to build up an overall character “level”.