Bohemia Interactive has revealed some details about their new Jets DLC for the popular military sim Arma 3. Jets will be available on May 16 to all those who purchase it, but the giant Aircraft Carrier, the “USS Freedom,” will be available to everyone, regardless if you buy Jets or not.

Without a doubt Arma 3 is one of the most popular military combat sims on the market today, and following a fantastic 2016 year, Bohemia Interactive is marching forward to keep the game in tip-top shape.

Platform Update
The Arma 3 Jets DLC is supported by a major Arma 3 platform update, featuring new content and features. The platform update is free for all owners of Arma 3. 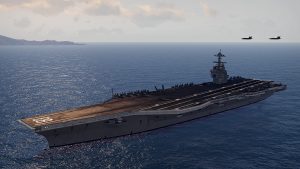 *The aircraft carrier is a static in-game object that can be positioned across the map via the 3D Scenario Editor, but cannot be ‘driven’. The carrier supports catapult take-offs and tailhook landings, and features functional autonomous defensive weapon systems.

The Arma 3 Jets DLC is developed in partnership with third-party external development studio BRAVO ZERO ONE Studios, which is led by Make Arma Not War winner Joshua “Saul” Carpenter.