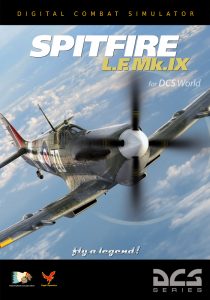 …And now back to your regularly scheduled program.

After some much needed down time for reasons entirely on my end of life, regular posting will be returning to SimHQ as of today!

I had hoped to bring you a detailed look at Wings over Flanders Field – Ultimate Edition in this post, but I need to spend a bit more time with the game to round the review out. That said, you can expect to see it, and more, in the coming days.

One of the most renowned fighters of WWII is now available for pre-purchase in DCS World – the Vickers Supermarine Spitfire. From DCS World:

The Vickers Supermarine Spitfire is arguably the most iconic fighter aircraft of World War II. Famous for its role in the Battle of Britain, the Spitfire served as Britain’s primary fighter during the entirety of the war. The Spitfire combines graceful lines, eye-watering dogfight performance, and heavy firepower in its later variants. For DCS World, we are happy to bring you the most accurate and realistic simulation of the Spitfire LF Mk IX ever created. The aircraft has been tested extensively by current Spitfire pilot Nick Grey and is unmatched in fidelity and detail.

The Spitfire Mk IX was originally developed as a stopgap measure as a response to the appearance of the Focke-Wulf FW 190A. The Spitfire IX is powered by the Merlin 66. This engine produces its best performance at slightly lower altitudes than the older Merlin 61. Spitfires equipped with this engine were designated LF Mk IX. This was the most numerous version of the Mk IX, with 4,010 produced. The majority of Mk IXs of all types used the standard “c” wing, which would often carry two 20mm cannon and four .303in machine guns. 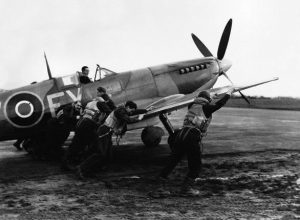 The Mk IX replaced the Mk V from June 1942. It allowed the RAF to go back onto the offensive in occupied Europe, and resume the “circus”, “ramrod” and “rodeo” raids. Its first combat success came on 30 July 1942, when a Spitfire Mk IX shot down a Fw 190. Amongst other notable achievements, the Mk IX took part in the highest altitude combat of the Second World War, when it intercepted a Ju 86R at 43,000 feet over Southampton on 12 September 1942. On 5 October 1944 Spitfire Mk IXs of 401 Squadron were the first allied aircraft to shoot down an Me 262 Jet. The Mk IX remained in service until the end of the war, even after the appearance of the Griffon powered Mk XIV. It is considered by many combat pilots as the greatest aircraft of the war and a personal favourite of Johnnie Johnson, Britain’s leading ace of WWII with 34 confirmed kills and 700 operational sorties, the vast majority on Spit IXs.

After the Focke-Wulf FW 190 arrived in the war, it became incredibly clear that the Spitfire Mk. Vb was simply outclassed. It was at this time, during the development of the Mk. VIII, that the powerful two-stage two-speed-supercharged Merlin 66 engines changed the game. The quickest way for the Royal Airforce to combat the Focke-Wulf’s presence in the skies was to simply adapt the Spitfire Mk. V’s frame to accommodate the powerful Merlin engine. This fast solution turned into a permanent one which led to the Spitfire Mk. IX becoming the second-most produced Spitfire variant in the war.

There have been a number of notable events and updates in recent weeks which SimHQ will be getting back up to speed with in coming posts. Rather than simply posting “old” news, I’m going to take the opportunity to look at, not only recent newsworthy topics, but how I can start bringing you pertinent information in a more timely and organized fashion in the future. Stay tuned!

In the meantime, head on over to the Forums!