Trimming in Combat. I suggest three types of situations where we might want or need to trim in “combat”. One is when you find your speed changing relatively rapidly…vertical maneuvering (Boom and Zoom – BnZ) is a typical example of this. The second is when you find yourself holding something other than one G for more than just few seconds. High G stall fighting is an example of this. The third occurs during weapons delivery. We want a stable platform for gunnery and bombing…one way to help get this is by trimming.

Trimming For Rapid Speed Changes. When we fly yo-yos or BnZ, we can go through some significant speed changes. Since the general rule is to trim for changes in speed, some might want to attempt this in our sims. My advice is to not do this! I feel that this is ultimately counter-productive in that your full attention is needed on solving the on-going BFM problem. In RL, I did not do much trimming when engaged…there was simply too much else going on. The stick feel changes were something I just accepted and lived with. So it is with the sims I fly. I make whatever flight stick displacement is necessary for the relatively short time that I’m going to be in that out of trim condition. In any case, I find that keyboard functions such as view changes, weapons and target cycling, etc take my full attention.

There is one exception, and that is flight into the high-speed end of the flight envelope. If I am extending out of a fight and going for max knots, then I’ll retrim. In doing so, I know I can take my attention off maintaining my pitch attitude and check six, or my map, or whatever…confident that my retrimming will let me look somewhere else except forward. Another example is the high-speed dive where I may need trim to help pull out of the dive.

So…my advice is to not trim during the actual turn and burn engagement unless you have a very specific need to do so.

Trimming While Pulling G. There are situations where you might find yourself in a prolonged turning fight where the G loads (back stick pressure) are greater than usual. The Lufbery Circle is one example. In this situation, I don’t have a problem with you using trim to help pull on the pole. I would add the caution that in the end, the trim that you put in will most likely have to be removed as you unload and reposition. Personally, I would not trim in this case…but, I see no reason other that personal preference not to.

As long as we are here, let me say again that trim in most cases should have no effect on turn performance. In the turn and burn engagement, trimming the nose “up” will not increase the aerodynamic advantage of the tail in the typical engagement speed range. Also remember that turn performance is a function of lift…lift comes from the wing, not the tail. All pitch trim will do for us in this situation is help “balance” the effort you are making in pulling on the pole.

There is an exception. This occurs when you are flying at a speed where air loads become a factor. For example, in IL-2, air loads seem to generally begin around 300kph. Above that speed, the sim’s flight model begins to restrict the amount of elevator displacement you can get. You may be able to regain full displacement by using a little “nose up” pitch trim. Remember what I said about HOTAS trimming being a no-no!

In the paragraph before the last, I said “should have no effect” and not “will have no effect” because we know that some sims seem to reward trimming in pitch with an increase in turn performance. There’s not much we can do about that until the developers fix the sim. Until then, I suppose we all need to be on the “honor system” and fly by the rules! As far as I’m concerned, these things are not “cheats”. Instead, I see them as “unintended consequences”…and they should be avoided.

Trimming During Weapons Delivery. Accurate weapons delivery depends on a stable weapons platform…that’s a fancy way of saying a “balanced” and reliable gunsight! The plane and weapons are designed so that the weapons are delivered along the plane’s flight path. If that flight path is skewed off for some reason, then weapon aiming will be affected and you’ll likely miss your target.

From a RL perspective, there are many aspects of how trim relates to weapons delivery. But that’s real life. We’re talking sims, so let’s keep to the things that we have to deal with when we roll in on the target. We’ll begin by leaving aileron trim out of the discussion. Unless you have an asymmetric wing load on your fighter, I don’t think we’ll have to worry about aileron trim.

Now…elevator and rudder trim are a different story. Here is the quick and dirty on these two.

Pitch trim can help diminish the “bobbing” tendency that we see in some sims. This bobbing can be an irritant when we are trying to fine-tune our aiming. This applies to A2A and A2G, gun and bombing attacks. One technique that some use (I do!) is to trim slightly “nose down” so that you have to hold just a little back pressure on the stick. Now, this is technique only…I feel like I have a better “feel” for the stick and better resultant control over the gunsight if I have a stick that feels a tad bit “heavy”. How much nose down? It varies with the specific sim…but 3-5 clicks of trim should be sufficient…just enough so that your flight stick is out of the neutral detent. Remember, this is personal preference only!

In an A2G attack, we often find ourselves diving and picking up speed. Often, unless we trim nose down as the speed builds, we end up fighting a nose pitch up tendency as we try to get the pipper on the target. What is happening is that the plane is trimmed for a slower speed…but you are going fast. So the plane wants to get back to that slower speed and it tries to raise the nose to do that. You end up having to push the stick forward more and more as the speed increases. This is awkward and is even more so if you have to make bank corrections at the same time.

In RL, we would trim the jet for the weapons release airspeed and then leave it there during the attack. You can do something like this in your sim. Trim your plane for the speed that you want to release at. If you forget, remember to add trim in the dive to reduce the tendency of the nose to rise.

Rudder trim is especially important in A2A and A2G deliveries. If the plane is not in coordinated flight at weapons release (no yaw), the gunsight is lying to you. What you see is not what you get. If the rudder is out of trim, the pipper is not your flight path. Your weapon, gun or bomb, will not hit the target.

The only way to ensure that you are trimmed properly in yaw is to check the turn and slip indicator. Remember, rudder trim changes with airspeed, so a good idea is to trim the rudder for release speed. Our sims accurately model yaw and its effects on flight path. You must make sure your rudder is trimmed neutral prior to the attack. The only alternative is to use your rudder pedals or twist stick to correct the yaw…and that is a tricky thing to do when you are concentrating on getting the pipper on the target! 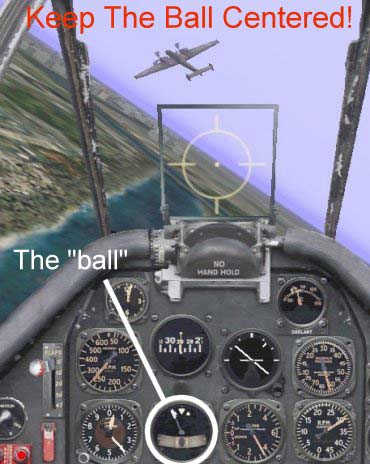 Modern jets have their turn and slip indicators incorporated into the attitude indicator. Keep in

mind…just because you have a HUD…this doesn’t relieve you of keeping the plane in trim!

The Landing. Of the three types of trim, only pitch trim is of significant importance in the landing. Landing is much like weapons delivery in that you are trying to hit a certain spot. In the case of the landing, you are aiming at the approach end of the runway. A balanced aircraft will make aim control a little easier.

One secret to a well-flown approach and landing is an early configuration. When possible, give yourself a comfortable final in terms of distance…one mile is more than enough. When maneuvering to the final lineup, add some extra speed for your maneuvering (10 to 15 mph in WW2 planes, 20-30KIAS in jets). Use pitch trim to reach a “hand off” stick feel. Do this exactly as before. Hold a constant pitch attitude visually and then make single nose up pitch trim inputs until the stick forces are gone.

Prior to final, get your gear down and extend partial flaps. “Partial” means “takeoff” flaps, 1 notch in a 3-notch system, or 3 notches in a 5-notch system. More flaps than this is too much drag. Be prepared for pitch changes when the flaps are lowered…hold your pitch steady and retrim as needed.

Once on final, extend full flaps and slow down to final approach speed. Hold your visual aim point steady and trim off any nose heaviness. If you have a velocity vector “tadpole”, use it and use trim to help you hold the tadpole on the end of the runway.

In the vent of a go-around, be ready to add nose down trim quickly to prevent too much nose pitch up as you add power.

Do not use rudder trim to counter crosswinds. Instead, use the rudder to fly your final approach.

Well, that should be a start to effective trim use in your sim flying. Good luck…and always remember that trim is a tool to make flying easier…it is not a control to fly with! 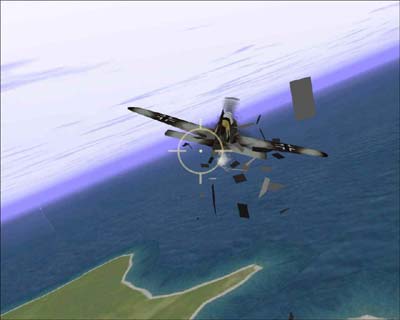