Imagine yourself getting ready to jump into the next mission in your sim campaign, or maybe you are lining up some friends for the next net meet or online battle. It sure would be nice to get a jump on the opposition by putting in a little “afore-thought” to the mission at hand. Real life fighter pilots plan their missions down to the last detail…you can do the same. As dynamic campaign engines and cooperative play complexity continue to improve, you have the chance to add to the realism and enjoyment of your game play by taking into account some typical planning considerations that lend themselves to present day flight simulation. In this three-part series, I’ll offer some tips on how to incorporate the five P’s (Prior Planning Prevents Poor Performance) into your mission preparation. Part One outlines pre-mission planning considerations. Part Two covers the ingress route to the target. Part Three examines the attack phase of your mission and concludes with egress and recovery considerations. Regardless of whether you fly against your flight sim’s artificial intelligence (AI) or against real life adversaries, the time that you spend on planning considerations will make a significant contribution to the success of your mission.

Target Identification / Photo Study
Before the start of a mission, real life fighter pilots go to the unit intelligence office where they study the target. Many sims offer maps and target pictures that you can become familiar with before you jump into the cockpit. The importance of this study goes far beyond knowing what the particular target looks like. This study is a two-step process. 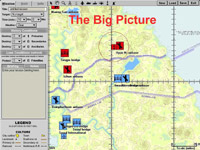 First, you want to look at the overall target area. Use your sim’s maps and target photos to “see” the position of the target from a “big picture perspective.” This is very important. You will approach your target at high speed and often at low altitude, where your radius of vision is limited. Your attention will be split between navigation concerns and analyzing, interpreting, and possibly responding to enemy threats. You will not have the luxury of circling the target at a comfortable altitude while you search for your target. You want to get in, destroy your target, and then get out before the enemy can get his act together.

Your “big picture” study has one purpose…you want to locate significant navigational references that you will use to “walk” your eyes to the target. As an explanation, let’s say the target is a truck convoy located near a bridge. As you run in to the immediate target area, you first locate the river. You follow the river until you get a tally on the bridge. You know from your target study that the truck convoy is situated in a particular direction from the bridge. Use your run in heading to the bridge as a twelve o’clock reference. Then translate the target’s location relative to the bridge into a clock position. For example, as you approach the bridge, you look to the bridge’s nine o’clock to find the target. Use this step-by-step process to get your eyes on the target in a methodical manner. Do not leave it to luck or chance to find your target. Your sim map and target photos make it possible to build your mental picture of this “big picture.” Using the “big picture to specific target” technique helps you find your target quickly, leaving you additional time to devote to achieving a successful one-pass attack.

Now, let’s consider what the target actually looks like. Use your maps and target photos to get a general picture of the target layout. Using the convoy again as an example, determine if the convoy is strung out in a line or grouped together like a herd of cattle. Note the general compass orientation of the target. Determine if your attack heading will take you down the length of the convoy or across it. This heading is called your “attack axis.” Your weapon effectiveness is affected by your choice of attack axis. For example, when using CBU bomblets, you want to spread the bomblets along the length of the convoy rather than across it. Your target study may give you the location of that threat in the convoy. Finally, you want to use your sim’s target photos to study the unique physical characteristics of the target. Look for easily identifiable features. You want to be able to recognize your target quickly. You do not want to confuse it with a less-valuable target. The value of knowing what your target looks like ahead of time cannot be overemphasized. If your sim threat display allows you view the target from different angles, do so…you can never be too familiar with the target.

Anticipated Threat Level
You can also study the anticipated air and ground threats ahead of time. You can determine their location and numbers. This will help you plan your route of flight. The type and capability of the enemy threat level will determine your ingress altitude and formation. Here are some items to remember:

Air threats. Study both the number and type of air threat. Determine what type of air-to-air weapons you may have to defend against…IR, radar guided, or both. Note if the enemy will have an AWACS capability.

Ground threats. Real world pilots will take special precautions to study enemy SAM and AAA threat positions and capability. They will draw “threat rings” on their maps to show maximum engagement ranges for those threats. You can do the same type of planning. Use your sim manual to note missile and gun maximum ranges and altitudes. Plot these on your sim map and then compute waypoints to fly a route to avoid these areas. Make best use of terrain masking as part of this planning.

Weapon Selection / Pk Criteria
Once you know your target, you can plan your desired munitions load. Your sim usually will allow you to configure your weapons loadout. Make sure you have selected the type and numbers of weapons necessary to get the job done. Here are some tips to keep in mind. Use your sim’s weapons loadout page to select the proper weapon(s) for your target. Avoid mismatching weapons to your target. For example, if your target is a bridge, do not attack it with CBUs.

Take your planned release parameters into consideration when you select your weapon. If dropping “iron bombs” from low altitude, consider using a retarded (high drag) weapon. Don’t drop “slicks” (low drag bombs) from low altitude…the fuse may not function and the result will be a bomb that does not explode. Also, a slick, because of its low drag, will impact the ground or target directly under your airplane…the resulting explosion may damage or destroy you as well as the target.

Communication Procedures
Newer sims today have a good built in vocabulary of radio calls. In addition, new technology is allowing real time voice communication in game play. Some of the online gaming services have incorporated this voice capability into their simulations. You and your flying partners should agree on standard terminology that is relevant to the mission.

Avionics Considerations
Your study of the threat will help you anticipate any threat indications that you may encounter during the mission. Understand how to interpret your Radar Homing and Warning (RHAW) or Tactical Electronic Warfare System (TEWS) gear. In particular, be prepared to quickly identify enemy SAM threats. Know the difference between being “painted” by enemy radar versus being actually fired at. While being “painted” is never a comfortable feeling, it may not require a defensive reaction. On the other hand, a “launch” warning is a serious matter and almost always will require a defensive reaction. Decide ahead of time what you will do for a given threat indication. Your defensive reactions vary from doing nothing in response to a minor radar scan to the jettisoning of your ordnance, followed by a break turn to avoid a missile in the air. The ramifications of the magnitude of these reactions to your overall attack plan should be clear. An improper defensive reaction brought about by an erroneous reading and reaction to a perceived enemy threat can result in a blown mission just as surely as if you had been shot down.

Support Forces
Know the makeup of any support forces that will accompany you to your target. These can include AWACS, Wild Weasel, Combat Air Patrol (CAP), and tankers. Study your sim’s communications section for pertinent radio calls to make to these assets. If these forces include human players, include them in your planning to make optimum use of their abilities.

Loss Of Flight Member / Abort Criteria
Know what you will do if a flight member is shot down or has to return to base. If you are planning a four ship mission, then have a three ship back up plan. This may require different formations and attack tactics. Realize the leader may be the one to get shot down. Make sure you have another flight member ready to step in as the new flight lead. At some point, you may not have enough flight members to complete the mission. Decide upon an abort plan and be ready to use it. It is foolhardy to press on if you do not have enough munitions on the remaining aircraft to destroy your target.

You now have enough basic info to strap your jet on and head out for the target. On the way lay many challenges. In the next installment, I’ll discuss ingress planning items. See you then.