Before we go on, I asked our own Andy Bush to give us a good summary of how he feels the F-104 and F-4 handle since he has extensive stick time with both aircraft.

Here are his thoughts:

The question is one of how do the F-104 and the F-4 fly in the sim as compared to real life. Well, folks…that can be a tricky question depending on what we are talking about. Here’s why.

We begin by considering just what the average simmer expects to see when he flies the two aircraft. What is he looking for in the way of performance, and what is he using as measuring stick? The fact of the matter is that few if any of the simming crowd have any experience at all in these jets. Oh sure…they may have heard things…they may have read things…but, let me tell you from personal experience, what folks have often heard or read is misstated at best and is complete hooey at worst!

So…what is it that the typical simmer expects to see in these two jets? High speeds? Yes. Good acceleration? Yes again. Hmmm…I’m running out of ideas! Other than these two characteristics, what do you want to see? As an answer, let’s start by telling you what I see.

Think of a flight model as a bell curve. Add to this that the curve looks at both speed and behavior under G. Most of the curve is within the region that goes from the “flaps up” speed to the maximum speed…and from one G to the onset of the stall. The outside boundaries include slow speed performance and acceleration when unloaded on the left side to stall/departure characteristics on the right side. 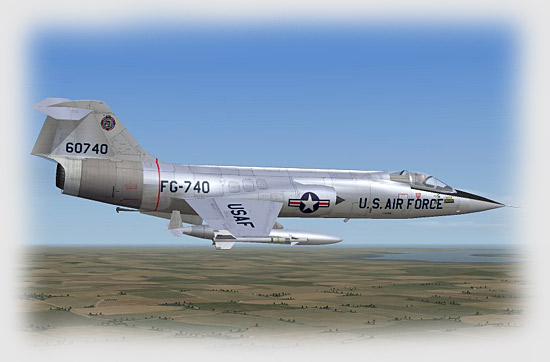 As a general statement, the Strike Fighters F-104 and F-4 do reasonably well in the center portion of their flight envelopes. The jets fly as fast as their real life counterparts did, and they fly as high as well. If that were all they we were interested in, then things would be grand. But, that is not the case…because it is in the two outside portions of the flight model bell curve that things go astray. There are three major areas of concern…roll performance, slow speed/drag performance, and high speed/accelerated stall performance. Let’s look at this by taking a typical flight from takeoff to landing.

Ground operations with these two fighters is much the same as with the A-4 and F-100. The jets are responsive to throttle input. Ground steering is done using the rudder, and care must be taken that you limit your taxi speeds to avoid high-speed turns that take you off into the “boondocks”!

Takeoff performance is acceptable. We have to remember that these aircraft could be loaded with a wide range of external stores. Both takeoff weights and drag values could, and did, vary considerably. When I fly these sims, my objective is just to get airborne…so, as long as the takeoff performance is anywhere close to what I would expect in real life, then I’m happy. SF presents no significant problems in this area of the flight model.

This area discusses what we can expect to see in the “heart of the envelope” part of the flight model. Two items come immediately to mind…pitch and roll performance.

Pitch performance is over-modeled in SF. Now, that’s a bold statement! Just what do we mean by that?

What we mean is that it is possible to exceed the pitch performance of the real life aircraft by a considerable margin. The problem here is not under-performance or over-performance. It is, instead, the pitch response that you get from the typical flight stick movement. In this sim, these jets can reach pitch rates and G levels that were unattainable in real life. Why? Because in real life, the pilot would not deliberately over-G his plane to the extent that the sim pilot can in SF. In this regard, SF is not too different from other sims. We need something that limits the simmer’s ability to command unrealistic pitch and G rates. Blackouts just don’t cut the mustard. The simple fact is that no real life F-104 or F-4 pilot would yank back on the stick to command a 10 G pitch up. Some other pitch rate constraint is needed other than the blackout effect. Until we get such a feature, we’ll likely continue to fly our sim aircraft in an unrealistic manner.

As an interim fix, we can only ask the simmer to pay attention to back stick inputs…the jets have G meters…use them to control excessive pitch rates. Remember, these two jets had a G limit of about 7 Gs. So, if you want to fly these jets correctly, use the G meter to get a feel for how hard you can pull on the pole. An over-G in real life was a big deal…a potential showstopper if the limit was busted too badly since the jet was likely busted too.

Roll performance is the next problem area. Roll inertia refers to the plane’s tendency to resist the initiation of a roll…and its tendency to continue a roll when the aileron is neutralized. Initial roll rate is good. These jets roll at rates that approximate real life. No problem there. The problem comes in when we want to stop the roll.

Both of these jets exhibit too much roll inertia. This simply means that they continue to roll when the aileron input is taken out (neutralized). In real life, these aircraft tended to stop rolling quickly, particularly if a little opposite aileron was used to counter the roll. This flight model feature was necessary to achieve the ability to point the jet quickly at a target. The roll axis needed to be easily controlled. Not so in this sim. Both jets will over-shoot the roll out point unless the aileron input is taken out early in the roll. The tendency to continue rolling is likened to a pendulum effect…once the roll is established, the roll will try to resist an attempt to stop it. The result is typically an over-banked attitude that the pilot must then correct. This is both irritating and a waste of time when time is often critical. The only correction for the simmer is to moderate roll inputs so that the pendulum effect is minimized. 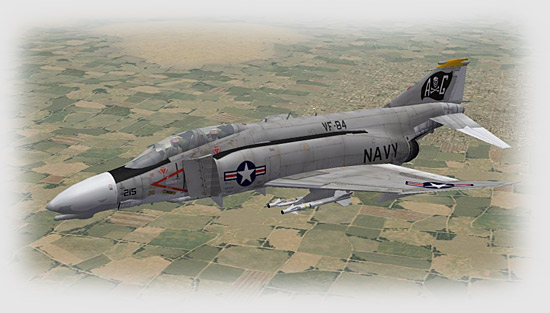 Let’s look at two things here. One is drag…how these jets either hold their energy or lose it. The other is the actual response to flight control inputs at slow speed. First the drag issue.

In one G flight, drag is significantly under-modeled in the F-104 and F-4. Simply put, these jets don’t want to slow down. This is the case clean or dirty (speed brake, gear, and flaps down). When you come in for a landing, you must allow extra time and distance to get these jets down to your approach speeds. In our opinion, the rate of deceleration is only about a third of what would be expected in real life. Once configured, the power setting needed to hold the approach speed is much lower than would be expected…almost idle in some configurations.

The second issue of slow speed performance is the response of the jet to control input. To more accurately discuss this subject, we should substitute the term “high AOA” for “slow speed”. The F-4 in real life was very sensitive to rudder input at high AOA. In fact, in the non-slatted versions (C, D, and “hard wing” E models), the rudder, not the aileron, was the primary roll control at high AOA. The reason was that the aileron under high AOA contributed too much adverse yaw. The F-4, being a swept wing aircraft, responded to rudder input with a roll at high AOA, and this is powerfully modeled in the sim. Push the rudder in at high AOA and you’ll get a good roll rate. That’s the good news.

The bad news is that the same roll inertia that was present in aileron rolls is again present in rudder rolls. It is easy to overshoot the roll out point when using rudder to roll the F-4, and if the rudder is not carefully used, it can easily progress into an out-of-control situation.

Rudder as currently modeled in the F-104 is incorrect. The aircraft rolls when rudder is applied…unfortunately, the roll is opposite the direction of rudder input. Not good! Hopefully this error will be fixed in future patches. Rudder effectiveness in the real life F-104 was relatively inconsequential as compared to the F-104. It would not roll the aircraft to any degree at high AOA. The F-104 was rolled with aileron, plain and simple.

The F-104 and F-4 had completely different stall and departure characteristics in real life. In the sim, they are basically the same.

In real life, the F-104 experienced a phenomena known as a “pitch up” when flown at too high of an AOA. This pitch up occurred before a traditional stall. Pitch up is not modeled in SF. Because of this, high AOA maneuvering is very unrealistic in the F-104. The sim pilot can fly the F-104 into pitch attitudes and conditions that the real life pilot would have never reached. The SF F-104 can be hauled around with relative abandon.

The F-4 stall and departure characteristics are modeled much better than the F-104. If pushed too far, the jet will begin an uncommanded roll and may enter a spin if forward stick is not used to break the stall. Departures in the real jet were very unpredictable, and their nature was dependent on entry speed. High speed and high G/AOA departures could be very violent. The SF F-4 models this to a limited degree, but the overall effect is a reasonable replication of real life.

In both aircraft, flaps are effective when maneuvering at slow speeds, just as was the case in real life. Flap limiting speeds are recognized when lowering the flaps, but once down, the flap limiting speed can be exceeded without any apparent damage.

The flight models of both aircraft provide a moderately challenging replication of real life jet flying. While some specific errors do detract from a realistic depiction of real world performance, the overall effect is a scalable flight model that enhances gameplay and player enjoyment without being so demanding that discouragement results.

The Evolution of Strike Fighters: Project One Page 16