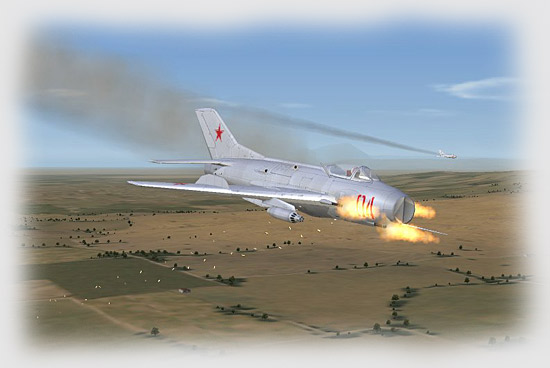 Lets Dive in! The sim comes in an attractive blue box with a cool picture of a fighter pilot riding his trusty throne. It’s one of those dinky boxes which all games come in these days and I really like the smaller format but it means one thing to me…..more than likely a disappointing manual. Every time I see a new simulation come out, I hold out hope for that spiral bound thing of beauty I know will see many hours of …ahem…bathroom reading. Admit it, I know I’m not the only one. Falcon 4.0 set the gold standard when it comes to manuals, a true work of art, and what I now consider a collector’s item.

SFP-1 comes with the obligatory CD case and a small but not necessarily bad manual. Its all of 52 pages long and includes what I would call slightly more than adequate verbiage and instruction in order to get the most out of the sim. The installation went very smoothly and I had no problems with the set-up and configuration of the game.

I settled back to enjoy my new sim as I clicked on the desktop icon. Most of us have come to expect some sort of opening movie, either rendered or generated from in game. It helps to set the mood and get you pumped up to play the game. Not in this case. Just a quick jump to a rather bland screen of options. I thought I missed something or didn’t select a particular option for install at this point. Nope. No movie at all. Ok I thought, no big deal right? It’s a flight sim , I’m not here to watch movies! The game install works out to right at 487MB on my system which is pretty good considering a lot of other sims eat up over 1 Gig of precious hard drive space. Once I got over the movie thing I decided to fire up instant action. A few quick tweaks of some fairly easy setup options and I was plunked right into the business office of the F4-E Phantom. Flyable jets include the F4 Phantom, The F-100 Super Sabre, F-104 Starfighter, and the A-4 Skyhawk. Several models of the F4 are included and you can fly for the Navy, Air Force and the Marines. Same is true for the Skyhawk or “Scooter”. The F-104 includes schemes for several air arms which flew her in Europe and throughout its cold war era service. 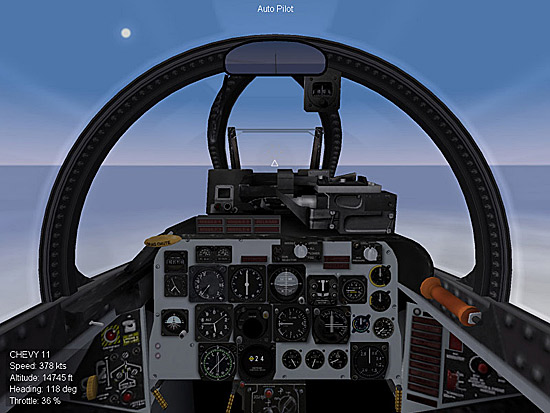 On my 1.4GHz Athlon gameplay is smooth and the frame rates are not an issue. I’m using a GeForce 4 Ti4200 with 128MB ram (Detonator 30.82) and a SB Live with WIN 98SE. I have had no real problems running the game other than a few CTD’s which I consider not to be a big problem as most games will do this every now and then. Its very stable on my system and I’m running it at 1024 x 768 with 32 bit textures. Pre patch there were some significant CTD problems but this appears to have been fixed. I do have the cockpit mirrors turned off but most other options on the graphics tweaking page are on.

Gameplay includes several modes including instant action, single mission, Campaign and Multiplayer. Instant action throws you right into the fray with MiG’s close at hand in your trusty Rhino (that’s an F-4 for you neophytes). The single missions allow some flexibility in mission type and aircraft and are the place to go for those wanting a bit more control over what you get to do in the sim. Campaign includes a standard series of dynamic missions and an interesting “mercenary” mode where you complete missions and receive money for it. You then use your resources to upgrade and buy weapons. You pile up cash for completed objectives. It reminded me a bit of the old Strike Commander sim where you got to do something very similar. At least its something a bit different than what everyone else is doing.