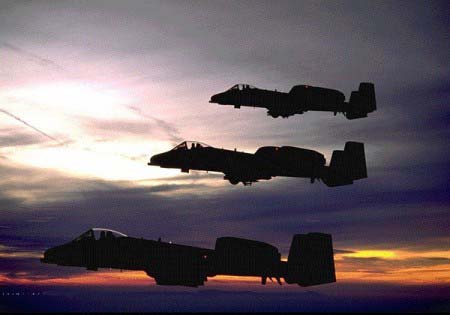 In Part One, I ended with mentioning the GAU-8 cannon, and that’s where Part Two takes off.

This is one mighty piece of awesome fire power hardware. There are many advantages to this cannon, such as that it’s cost effective, it’s very accurate, and so on. The GAU-8 is a seven-barreled, rotating cannon, and each barrel is 2.30 meter long. The gun depends on the hydraulic system to operate. It has two motors; one of those is powered by the right hydraulic system and the other one powered by the left hydraulic system. Although the cannon could fire at low and high rate in the beginning of the A-10’s lifespan, as it is now only one firing rate remains now…the high rate of 4000 rpm. If you look at the nose of the A-10, you’ll see the gun is offset to the left; however, the firing barrel will always be on the centerline. The GAU-8’s ammo drum holds 1174 rounds, which is about 17 seconds of continuous fire to spill on the target. The rounds are fed from the drums to the barrels via a linkless feed system, making it virtually jam-free. The whole system weighs in at a hefty 1920 kg. This cannon is a pretty accurate weapon…when fired from over 1.5 kilometers away, 80% of all rounds fired will still impact in a 10 meter (30 foot) circle.

You aim the cannon with Constantly Computed Impact Point (CCIP) displayed on the Heads-Up Display, also known at the ‘deathdot.’ All the pilot has to do is put the dot over the target and “sqquuueeeze” that trigger…the computer does all the hard work and constantly calculates the impact point, taking into account such things as crosswinds, aircraft drift, and so on.

The GAU-8 can fire three types of ammunition: the PGU14 armour piercing round (depleted uranium), the PGU13 for softer targets..like trucks, and a training round. Usually, a ‘combat mix’ is used, meaning one PGU13 followed by 5 PGU14s or one PGU13 and 4 PGU14s. Each round is 30 cm (about one foot) long. The PGU13 leaves the barrel with a muzzle velocity of 3440 feet per second and the PGU14 departs with 3300 feet per second.

A brief look at some important avionics/systems…

On the right of the aircraft, below the cockpit, the AAS-35 Pave Penny laser spot tracker is placed. This is not a laser designator. Pave Penny is only a laser seeker device, meaning it can only pick up signals and it can’t illuminate it’s own targets. Instead, it picks up the signals from ground-based forward air controllers or from airborne FACs, like choppers. This information is then fed to HUD, providing the pilot steering cues. All the info is displayed on the Kaiser heads up display.

The type of radar warning receiver depends on when the aircraft was build, but the latest builds have the AN/ALR69(V). This system can pick up both airborne and surface weapon systems. It shows the pilot the threat type, the mode the emitter is in, and the angle. Earlier A-10s have some version of the AN/ALR-46(V).

Although several types of ECM pods can be loaded, usually it’s the AN/ALQ-131 pod, which goes on station eleven. The AN/ALE-40 chaff and flare dispensers are built into the gear housing and wingtips. These can be loaded with any combination of chaff/flare, depending on the anticipated threat. The pilot has a control box in the cockpit to operate the chaff/flare.

Another thing worth mentioning is the TV monitor in the top right of the cockpit. This monitor displays both electro-optical (EO) and infra-red (IR) images from the EO and IR Mavericks. In the Gulf war pilots used the IR Mavericks’ monitor image as a ‘poor man’s night vision system’

On the left is the Armament Control Panel. On this panel the pilot selects the weapons he wants to use and the way he wants to use them. Things like AIM-9 mode selection, arming, jettison, and release modes, ripple modes and so on are all included here.

Technically, the maximum airspeed for the A-10 is around 450 knots IAS, either with or without external stores, or Mach 0.75. However, this speed is seldom ever reached and in normal operations the max level 1 G speed is about 300-350 KIAS depending on weight, configuration, and temperature.

The rudder becomes effective around 50 knots IAS. Having one engine go out will require moderate rudder input to counter the yaw but even with one engine out, there’s still enough control to fly where you want to fly.

When the flaps are deployed, they will increase lift and thus decrease aircraft stall speed, and they will also increase the amount of G available at low airspeeds. Deploying the flaps will result in a slight nose down pitch change. Level flight characteristics are good. The A-10 has very stable low speed handling, but it will not trim completely ‘hands off’ for any extended period of time.

The A-10 has a very good instantaneous turn rate, but the sustained turn rate isn’t as good because the aircraft does not have enough thrust to maintain its speed. However, it is still capable of more than 15 degrees per second maximum instantaneous G just prior to wing stall. There is a stall warning system which will warn the pilot that he’s getting close to a stall by sending out a ‘chopped’ tone. This system will also give a continuous tone when the aircraft is at its best performance, and for the best results you should hear that tone without getting to close to the stall point. The aircraft itself gives little stall warning but it has the earlier mentioned warning tones and when the gear is down a stick shaker will warn the pilot of impending stall. Stall speed depends on a lot of things, but without flaps and at a weight of around 30.000 pounds it’s about 120 IAS. Once in a stall, the A-10 has excellent stall/ post-stall/ spin characteristics. To get out of a stall the pilot has to reduce the AOA to below stall warning and do the obvious things like retracting the speed brakes. Overall it is a very easy aircraft to fly, which is good because a pilot’s first flight will be a solo flight. 😉

A-10s are most often used in the two-ship unit, and the most used formations are the line, wedge, and trail formations. Flying in pairs gives several advantages. Because the A-10 is slow, it’s also vulnerable to the fast fighter jets so it’s vital to keep looking around thoroughly as not to get jumped by one of those. The job of the lead pilot is to get the flight to the target, and then decide on which tactics and weapons to deploy. The wingie will keep a close eye on the surrounding air space and backs up the lead with navigation.

Getting to the target area the FAC, if there is one, will be contacted to get the latest info. And depending on the type of threat and type of weapons carried, the formation type may change.

Typical tactics include shooter-cover, decoy, splits, and the ‘wheel.’ Shooter-cover basically means one of the pair will attack a target while the other one will watch the attacking aircraft’s back. With decoys, one of the pair will lure a threat into engaging him while the other attacks from a different direction. The ‘wheel’ is a circular pattern with the target in the middle, or in case of a SAR mission the downed pilot in the middle. All weapon types may be employed using these tactics.

When available, choppers will have taken out the local air defense threats so the A-10s can focus on the target. Attack altitudes will vary depending on the threat…everything from ultra low level to medium altitude (15000’). With a low level final the pilots will popup in a 10 to 20 degree climb and at the desired height, roll the aircraft inverted into the attack dive. On the way out, the goal is to avoid any threats, and turning is the name of the game here. As soon as the pilot is aware of a threat he will turn away from it and if that results in turning into another threat he will turn away from that too, ‘weaving’ his way out of the target area.

All that being said, tactics evolve and each war and even each battle will require its own tactics.

The Desert sands of Iraq

Of course, Desert Shield and Storm have to be mentioned in an article about the A-10. When this war started there were still people who had serious doubts about the A-10’s use and performance. Even the man who ran the air campaign in the Gulf War, General C. Horner, didn’t like the A-10 one bit and it took some overruling by Richard Cheney before the A-10 was deployed. General Horner had to eat his words after the Gulf War and has stated that the A-10 was a true performer and took back every bad thing he said about the aircraft.

Now for some more obligatory numbers:

All in all, the A-10 flew 16.5% of sorties in the Gulf and the excellent results proved it’s critics wrong.

The aircraft also proved its incredible survivability, and there are a few amazing stories out there mentioning heavily damaged A-10s making it back to base. The A-10 had lower losses-to-missions rate than the F16, F-15E, or Tornado, again proving the lesson learned in the Vietnam War and soon forgotten…high speed high tech jets are vulnerable, less accurate, and stand a lesser chance to make it back home when damaged.

The A-10 is one beautiful aircraft and has proved its capabilities beyond doubt. It has proven high tech isn’t always the solution. It’s also one of the few remaining true ‘pilot’s aircraft,’ being a great joy to fly. Where it used to be an aircraft very few new pilots would wanted to fly, opting instead for the glamorous F-16 or F-15, it has now turned into an aircraft most new pilots would love to fly.

http://www.a-10.org/  One you should really visit. Many of the images in this article are from this site.

Last but not least, thanks to Andy Bush for proof reading this article and pointing out errors.

History of the Fairchild-Republic A-10 Thunderbolt II, Part One