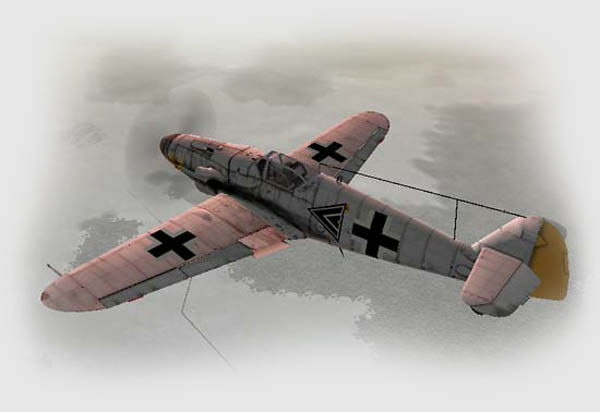 Ilyushin’s IL-2 Sturmovik ground attack aircraft has been modeled in the first flight simulation dealing exclusively with the air war on the Eastern front during WWII. In this article I will provide a brief introduction to two fighters that saw extensive service in that theatre and discuss their performance in the Forgotten Battles flight simulation, including some relevant tactical observations that are certain to be of interest to their virtual pilots. I also discuss the relationship between those comparisons, and what is known about the reality of air combat in that theatre.

It became apparent early during W.W.II that speed and firepower were vital attributes for a fighter. The ability to close rapidly on a target and strike while undetected was paramount. Pilots forced to turn their aircraft were typically subjected to high loads, but would begin to lose peripheral vision between four to four and a half G, and it wasn’t until pilots had the benefit of the first anti G-suits, early July 1944, that pilots were able to employ turns of around five or six G for periods between thirty seconds and a minute without blacking out. Even so, turning engagements involving four G and above were both physically and mentally draining, due to the mix of extreme concentration, physical exertion, and heart pounding amounts of adrenaline! That was a factor in explaining why protracted turning engagements were the exception rather than the rule, and helps to explain why 80% of the aircraft that were shot down involved the element of surprise and high-speed low G attacks. Surprise depended, among other things, on the ability to close on a target before being detected, and that required speed. Faster aircraft were therefore more lethal, and higher speeds also increased the pilot’s survivability, two very powerful driving forces for aircraft manufacturers!

The quest for speed led to more and more powerful engines being fitted into existing airframes with the necessary structural modifications, and that resulted in faster but heavier aircraft. Generally speaking, fast high wing loaded aircraft have inferior low speed maneuverability when compared with the lower wing loaded fighters, but they could fly faster and once they were fast, they were able to sustain that speed better, which in W.W.II was what the fighter pilots wanted. The high speed bounce and energy tactics were employed by the Aces, who preferred to use fast aircraft to strike lower and slower opponents. If they needed to turn at all, they would only hold the turn long enough to briefly track a guns solution before extending safely. The secret of their success was in securing that initial advantage! Pilots blessed with superior eyesight, visual acuity, or the instincts of a hunter, could often maneuver on enemy aircraft to set up their attack while their adversary remained unaware. They would maneuver towards an initial energy and positional advantage using factors such as altitude, cloud cover, and the sun to their benefit. Without such an advantage, they could simply choose not to engage. They could refuse combat until they were able to do so under more favorable circumstances. Those were the tactics that allowed the experienced axis pilots to acquire high scores on the Eastern front.

It was the success of such tactics that drove aircraft manufacturers to develop ever-faster fighters with more powerful weapons. With the urgency involved during war, and due to the lead-time required to develop new aircraft, most manufacturers in WWII became locked into extended development cycles for their existing aircraft. So for example, between 1935 and 1945 the Bf109’s weight increased by more than 50%, its top speed increased by the same amount and its climb rate increased by 80% while its engine power increased more than three fold. So the Bf109 evolved to meet the demands of its pilots and the most numerous of its variants was the Bf109G, and the fastest of the Gustav variants was the Bf109G-10. As always, various sources differ in the exact values provided, but one of the best speeds quoted for the G10 is given as 690km/h at 7,500m or 428mph at 24,607ft, a figure difficult to achieve in Forgotten Battles without overheating the engine. Since the G10 variant of the Bf109 has been modeled in the Forgotten Battles simulation we can compare it with a worthy soviet adversary.

The demand for more power was universal, so when in March 1943, the La5 received the Shvetsov ASh-82FN radial piston engine, it was able to achieve a top speed of 648 km/h at 6,500m or 403mph at 21,325ft and could climb to 5000m in four minutes and 42 seconds. The performance of the La5FN made it superior to German aircraft serving at the front at that time, but in this article I will compare the La5FN with the later model Bf109-G10 as they have been modeled in the Forgotten Battles simulation.

Flight sim’ pilots who read history often have an impression of how their favorite aircraft performed against the enemy aircraft that it met in combat. Unfortunately, those impressions are generally not reliable, because when you consider the operational record of an aircraft, it is not always possible to determine how much of it was due to the quality of the aircraft or the men who flew it. The issue can be further clouded by the often observed disparity between the real world data and that occurring during simulated flight. So, by way of disclaimer, a brief note regarding fidelity. It is often noted that many reliable and accurate sources of data for an aircraft, sources such as the manufacturer, various scientific establishments and test agencies, and of course the air forces that used the aircraft operationally, often conflict in the precise values of performance data. The simple fact is, that unless they all tested the very same aircraft, at exactly the same place and at exactly the same time, you would expect to see differences in their results. There are so many factors that contribute to those variations, it is more surprising that the numerical values for such data agrees as closely as it often does. For that reason experienced and competitive flight sim’ pilots won’t assume that the aircraft being modeled will compare exactly to their expectations. They do however expect the physics of the flight modeling to be sophisticated enough that real world tactics can be successfully employed against their opponents and that is certainly true in IL2 Forgotten Battles. What is most important in a competitive environment, is not how close the performance of the flight model matches that of the real aircraft, but how the performance of the aircraft in the simulation compares with each other. After all, that is what will count in your next engagement!

A method of performance comparison developed by the British early in WWII, and then modified by the USAF in the 60s allows a pilot to compare the performance of different fighters and determine which one is superior to the other at each point in the envelope. So, during the Battle of Britain pilots were able to compare the flying characteristics of the Spitfire with the Bf109E and thus identify which regions of the flight envelope were most advantageous or dangerous to him. The diagrams in use in 1940 were not quite the same as the ones I’m using here, but they were both based upon the theory of Energy Maneuverability (EM) and the simple diagrams are so easy to read that they allow for aircraft comparison at a glance. Let’s take a look at the overlay for the Forgotten Battles La5FN and Bf109G10.

This diagram shows that the La5FN has a corner velocity of 358km/h where it has an instantaneous turn rate of 33.4 degrees per second (dps) with a turn radius of 170m. The Bf109G10 has a slightly faster corner velocity of 367km/h where it achieves a slightly worse turn rate of 32.6dps and a slightly larger turn radius 179m. Those differences are only small, and you can see by looking at the distance between the corner velocity and the zero Ps curve for both aircraft that the Bf109G10 also loses energy more quickly at corner velocity than the La5FN. You will also notice that between 350km/h and 450km/h the Bf109G10’s zero Ps curve is above the La5FN’s zero Ps curve and so the Bf109 has the better sustained turn rate in that region of the envelope. Above 500km/h the La5FN has the better sustained turn rate and it also has the higher top speed of 572km/h which is 10km/h faster than the Sea Level data quoted for the La5FN but is within 2% of it, and still well within the sort of variation you might expect to occur between different test establishments. The top speed at Sea Level for the Bf109 is 543km/h some 29km/h slower than the La5FN and also slower than the 550km/h that at least one of its type was reported to have achieved, but still within a very reasonable 2% margin. Some of the important points are illustrated in the following diagram.

The most striking advantage for the La5FN that can be seen in this diagram is its superior maximum sustained turn rate. You will notice that the sustained turn rate for the Bf109G10 begins to drop below that of the La5FN at just under 350km/h and when they are both on the edge of the envelope the La5 can be seen to be able to turn at almost 23.5dps while the 109 only manages 21dps with a larger turn radius, an advantage that would be considered decisive in an online simulation.

In order to illustrate those figures, I have plotted the best sustained turn rates and radii for these two aircraft on the following two diagrams.

Here you can see what the La5FN’s turn radius and rate advantage looks like, and shows that in a protracted turning engagement the La5 would not only be turning inside the 109, but would also be gaining angles relatively quickly.

So I have provided the same analysis for these aircraft at an altitude of 15,000ft, but you can see from this diagram that although the aircraft are a little faster in terms of their true airspeed, their turn rates are lower and their turn circles are bigger. Also notice that the distance from their corner velocity to the Ps line has increased, which means both aircraft will lose energy far more quickly at this altitude. Despite the fact that the maneuverability of both aircraft is considerably worse, and consequently more difficult to fly and fight at this altitude, the relative situation has not really changed.

The tactical conclusions one can draw from this analysis is that since the La5FN has both a superior low speed maneuverability, and a faster top speed it has a significant advantage. It can not only catch the Bf109G10 and force it to engage, it can also out turn it once it has done so. This advantage exists at all altitudes between Sea Level and fifteen thousand feet. In order to be successful against the La5FN the Bf109G10 driver would either need to achieve an element of surprise in order to bounce the La5FN, or to secure a significant positional or energy advantage prior to the engagement.