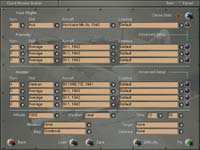 Want to jump right into a fight in your favorite aircraft type? This is where you do it. QMB is used to setup a quick and relatively simple sortie for immediate action. It’s intuitive and easy to use; all the controls/options are obvious and straightforward. QMB is also a very useful tool to easily test new skins, develop tactics against specific adversary types, and practice just about any FB skill you need. The only liability is the format of the QMB generated mission files. They will not work for Multiplay, which is unfortunate since it would be fun be able to setup quick easily customizable sorties for multiplayer use.

This powerful utility is used to build missions for single missions, static branched campaigns, and cooperative/dogfight multiplayer missions, using it is not too difficult, but it is not very intuitive either. You’ll have to refer to the users manual in order to learn some of the commands, but once the full builder is mastered, it’s easy to create custom missions. A very interesting feature of the “Mission Editor” is the ability to use it in either 2D or 3D modes. This means you can better place ground entities in realistic tactical positions by viewing it in the 3D mode. The FMB is just about the most comprehensive mission builder I have seen in any simulation, yes, it takes a bit more effort to use, but the results are very well worth that effort. 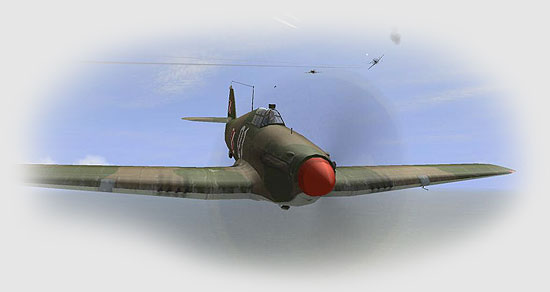 FB’s aircraft graphics are legendary. They are absolutely stunning, so much so that I created a few interesting screen shots that I use for Windows wallpapers on my desktop. The improvements over IL-2 include higher resolution aircraft ‘skins’. FB’s skins are 1024 x 1024 instead of 512 x 512 (more good news… your old IL-2 512 x 512 skin bitmaps will still work!). The additional detail this allows is very obvious especially if your hardware will support running FB at maximum graphics settings. The addition of custom aircraft and pilot skins is very easy, assuming you have the skill to create a nice ‘skin’, just place it in the specific aircraft folder! I especially like the pilot face skins function, during my multiplayer games it was absolutely spooky to look at my wingman and see my brother’s face looking back!

The combat damage graphics are the best I’ve ever seen. Forgotten Battles ‘hit’ bubble must be very complex. When an aircraft gets hit the damage displayed appears appropriate, including being able to see right through a hole blown in the airframe. The ‘standard’ (or poor!) damage graphics files, so obvious in games like Rowans Battle of Britain, are not evident in FB. Here they are amazingly realistic, and dependent on exactly where on your aircraft you take a hit. The smoke, fire, and crash graphics are just as fantastic. The only derogatory comments I have are the persistency of bullet smoke trails and the ‘Nuclear’ muzzle flashes. I’ve done a whole lot of shooting, both military and civilian, and I’ve never seen any smoke trail continuously follow the bullet all the way to the target. This is unrealistic even on tracers. 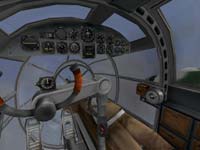 The muzzle flashes are also way too bright. Their intensity is almost appropriate for nighttime, but in a daytime environment they should be much more subdued. The real-life 30 MM cannon on the USAF A-10 is not even as bright as a Light MGs in FB!

The Cockpits are works of art. They’re historically accurate right down to minor details. They’re also equipped as military aircraft cockpits should be, no Cessna stall warning lights and horns, unlike some other recent WW 2 flight simulations. All the instruments work and the appropriate flight controls move with your inputs. I did notice a minor ‘bug’ in some of the new add-on aircraft like the P-40; the Attitude Indicators do not function in pitch. A very minor distraction that I am positive will be fixed as soon as the patch is available.

The terrain, water and weather graphics are also remarkable. You do need the latest and greatest video card to realize all the benefits of FB’s improved graphics, especially the new water effects. The ‘new’ water looks absolutely real, near photo quality (I think a GF 4 is the minimum for the ‘new’ water to display properly). The terrain, especially around big cities, is a resource hog but not so much that it will render unplayable frame rates if you have your graphics setting appropriate to your hardware. Terrain features are probably a little on the sparse side, but I am sure this is intentional to keep the aircraft and other more important game-play entities at a higher detail level. The cities, while appearing a little void of humans, do look pretty darn good. The land/water contrast is very well done; some appear to be cliffs but there are also beaches where the surf seems to undulate realistically on the sand. The weather effects, while not quite up toMicrosoft’s Flight Simulator standards, are a very close second. The clouds look great, and they are realistic enough to meet the requirements of a good combat flight simulation.