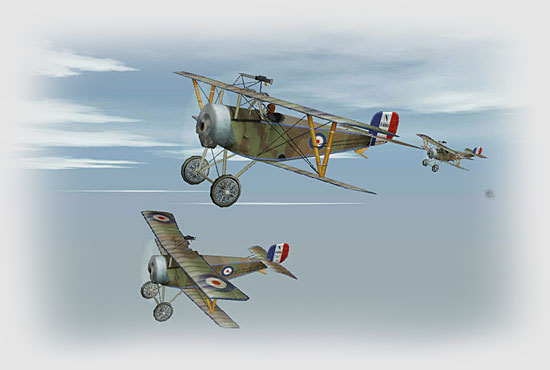 It is hard to believe that Red Baron II has been out for almost six years. What is even more amazing is the lack of a replacement for the venerable title. With the exception of add ons for games like FSDOE and online only titles like Dawn of Aces there hasn’t been any game created to take the title of best WW1 flight sim away from the Dynamix game.

When Red Baron II was released it received some pretty mixed reviews. The game was deep, and playable but there were bugs and one noticeable feature missing; 3D card support. Sierra and Dynamix quickly fixed the problem with Red Baron 3D and the game took on a prolonged life rarely seen in the video game world. Multiple individuals worked countless hours to keep the game up to speed with new patches and enhancements.

Still, the game was getting dated. I put my copy away about two and a half years ago when I progressed from my V5500 video card to one of the GeForce models. While RB3 looked adequate, even comparable, on a 3dfx card, it’s lack of D3D support meant that it would lose out against newer video cards. Some of the Glide wrappers introduced during that time were fairly primitive and didn’t work well on many systems.

Over time I had heard of a superpatch for the game, created by Mitchell Kent (AKA Kess), named The Promised Land: Full Canvas Jacket for RB3D (FCJ). This patch promised to not only upgrade the game graphically but to increase the realism of the game. “I had been running the Promised Land web site for over 5 years making various additions to Red Baron and was/am planning on moving into other sims. After doing quite a few add-ons I decided that an all encompassing — one patch does it all enhancement was in order…”

New cockpits, graphical enhancements, flight model tweaks are supposed to make the came much more current. When you consider the dearth of WW1 flight sims as of late it is easy to understand how people would look for an upgrade of the venerable RB3D. This was not an effort of a single individual, rather a group effort of a large group. “I had 3D plane shapes that were created by various members of a RB development group that the Promised Land belonged to (SWWISA) that I was using as a base to make plane skin textures for, I had a few fellow SWWISA member helping me out with various aspects like historical data references (Steve Fabert & Ted Harrity) I also realized that I would not have the time to personally tackle other area’s so enlisted a few other SWWISA members help for these like the Flight Models (Capt. Royce) and Damage Models (Zinteck).”

Kess continued, “One of the biggest and most dramatic changes to my vision for FCJ was when an old Internet friend who had worked on and off with me at the Promised Land came on board, Cap’n Darwin (Jim Snyder) had done a lot of various data/hex editing for small projects of mine in the past, he came on board to help with some of the data file creation and to add in a lot of the new objects and things that I had wanted to put into FCJ. In the end he was able to get a lot of the things added into the game, make changes that increased game performance, he created a standalone control panel app for FCJ that allowed users to adjust all the internal game parameters they normally would, and a lot of other settings a player couldn’t normally access, found other settings to help beef up AI aggressiveness, increased the maximum in game screen resolution to 1600×1200, and other things, he was even able to make the Control Panel launch the game from within the app and unload itself from memory prior to launching RB like I asked. He really helped moved the vision for FCJ even farther down the road than I first had planned to go.”

“Well, I’m quite confident of the work I did.” Kess stated. He should be. What is more impressive about this add on is the changes that have been made to the title without the benefit of the source code. “Without code access all you can do is make do, workaround is the operative word here…. ”It does make you wonder what kind of game could be created if Sierra did release the source code. Even with his limitations Mitchell has created what is among the best upgrades imaginable for a current title. It is on par with the F4UT SuperPAK upgrades done for Falcon 4.0 or the currently being done for Rowan’s Battle of Britain. Keep in mind though that both those groups have had the source code to work with, Kess has had to work basically blind.

As I said before, there is a good reason that Kess decided to use RBII as the basis for his game; that of course is RBII itself. “I looked at a lot of the other sims out there but outside of graphics/audio, they all seemed to lack 2 key components in my book, a great dynamic — anything goes single player campaign, and a great mega-multiplayer online arena, RB had these but lacked the graphics, audio, and other details, to me it was the logical choice for beefing up.”

When RBII was released it was considered by most a diamond in the rough. While buggy, and lacking support for 3D cards (in RBII), even modern games have trouble duplicating the campaign structure of RBII/3D, the multiplayer setup and the customization ability in both instant action and in custom missions. Kess summed up his reasons for pursuing this massive upgrade by stating, “…There just isn’t anyone out there that has made a WWI game right like RB, and no other game that really matches the uncertain “anything can happen” feel of RB’s campaigns.”

Well, the question arises, does FCJ upgrade the game to the 21st Century, as has been advertised? Well, not exactly but the game is massively improved with this add on. But I am getting ahead of myself.

This is not a total re-review of RB3D, that is overkill IMHO. What I want to do is evaluate the improvements made in the game since Kess has updated the software. I honestly feel that 99% of the people interested in getting this software have played RBII or RB3D in the past so going over the pros and cons of the interface and campaign structure is not warranted here.

Over Flanders Fields Phase 3: Between Heaven and Hell Page 2