This article is a sample of the ongoing Falcon 4 campaign mission reports being posted in the SimHQ Falcon 4 Forum and is representative of one of the many different mission types I’ve been flying. In order to prevent a disruption of the continuity of the campaign I’m currently flying and doing mission reports on, this mission is a “stand-alone” in that it wasn’t flown as part of the campaign sequence I’m currently flying and reporting on. That campaign is currently on Mission #24 in the middle of the second night of the war. By using one of my older saved campaign files I was able to choose this mission as a good “demonstrator”.

This report was flown using Falcon 4, the v1.08 patch, SP3, BMS .99, FreeFalcon2, Twaelti’s High Tiles, and Aeyes 1600 x 1200 cockpit. All screens were originally captured at 1600 x 1200 and resized to 1024 x 768 and reduced in quality for bandwidth purposes. Many thanks to the F4 community for their continued improvement of one of the highest fidelity simulations our niche has ever seen.

This morning we will be flying a four-ship Offensive Counter Air (OCA) strike against the North Korean airbase located at Taetan. Since most of the enemy air threat has been located over highly contested Imjin River crossings we expect to have a relatively easy run this morning. Our primary target for the mission is the destruction of the main runway at Taetan. There are two squadrons of MiG-19s based at the airfield but we will be accompanied by a flight of F-15Cs providing CAP over our strike. 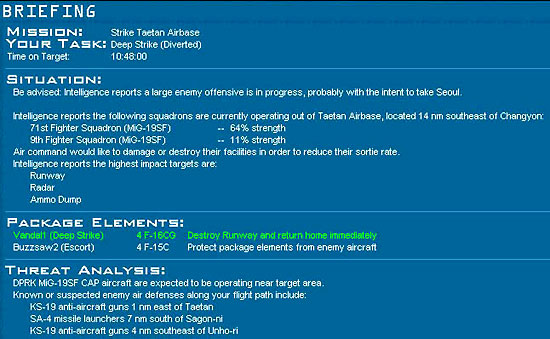 Our flight will depart Osan and fly an over-water low level approach with a relatively flat and easy approach to the IP. Will we use the terrain following radar (TFR) for the approach and limit our radar emissions. 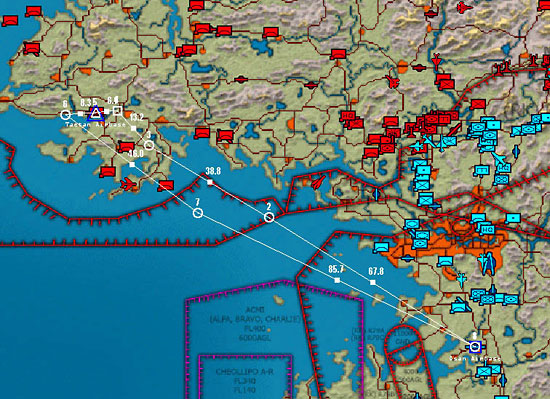