Damn! We will have to return to Sochi, without expending the KMGU munitions Vasily carries. Our mission is only partly done. I bite my lip in frustration. For the want of two RBK cassettes!

I release Vasily and head for home, gaining permission to buzz the base at Gudauta and I rock my wings as I pass low over the Canadian flight line. Gudauta tower calls to tell me that the American Ticonderoga cruiser sailing with our naval task force has dispatched its SH-60 helicopter and picked up the Canadians from their swim. Other than bumps and bruises they are well! My eyes fill with tears of happiness as I set course for Sochi, and home. We have at least partly succeeded, and our allies are safe. Both Turkish pilots have also been recovered, though I am sure that they would have preferred otherwise. We have one, the Americans the other.

My flight home is uneventful. Even with its “short legs,” the MiG is mission-capable, as you would say. I have 1500 kg fuel as I arrive over the outer marker at Sochi, line up, and slip down the glide-slope for a smooth landing, popping my drogue as I touch down. 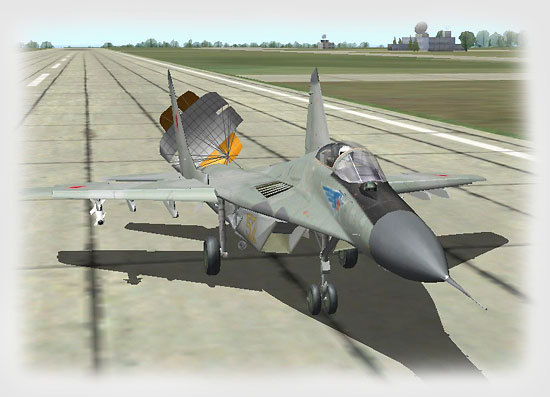 That evening, I learn that I destroyed half the train, and the Commander considers this a success. And I am an ace now! Now I have five enemy fighters to my credit. Four Phantoms, and one Falcon! Six, really, if you count the C-130, which I do not. I am proud of this achievement. The Turkish F-16 pilots are their best. They have lost six Falcons now; four to cruiser Moskva, one to 433 Squadron, and one to me. The Turkish people will not take this news well, and the mullahs will have their hands full in their Government.

We are glad to provide them this headache and hope to do more in this regard, very soon!