Congratulations, big guy! Through your canny use of standard formations and procedures (and your own bag of tricks at times), you’ve brought your Hogs to the contact point unscathed. Now the tough part begins! Unless you were fragged against a specific target and got your ducks in line before takeoff, you’ll have to choreograph you act at the CP. Obviously, you’ll need some more information before you can start. The standard forward air controller (FAC) briefing is the most likely source for this info… you remember its main points: target location, heading from IP, distance, time, location of friendlies, best bailout direction, wind speed and direction, the name of the FAC’s parakeet, etc, etc.

This can all be very helpful (well, we’ll forget about the parakeet)… but the important point is this. You can plan your entire attack when knowing only the target location. Everything else is gravy.

But there’s one glaring limitation to this concept. You can’t plan an attack while warting along at 100 feet or less. You’ll probably have to slow things down a bit and set up a holding pattern at the CP. What kind of holding pattern? We’ve already mentioned a couple of options…the “bone or racetrack “ (crossturn holding) or the circle… take your pick. Once in the hold, use the time that is available to… (1) get the FAC briefing and plot it out on your map, or (2) if FAC instructions are not available, plot the target on your map and work out your own plan.

Let’s talk about the second option… making your own plan.

We’ll start with our flight at the CP. You are far enough from the target to allow a little planning without being distracted by glowing golf balls or flying telephone poles… as for an air threat, that’s what the wingie looks out for while you are doing the planning. You’ve got the target coordinates… first, refold your map so that the target is centered. Now check the map for the “big picture”. Since an unobserved ingress to the target is a most desirable thing, let’s begin by getting a good overview of the terrain. We want to look for terrain that does two things for us… (1) allows us to remain masked for as long as possible as we approach the target, and (2) consists of readily identifiable features that we can easily find in the heat of battle.

This map study begins with the locating of the IP that we will use to begin the attack from. If possible, try to plan at least two IP’s. Look for vertical terrain or features such as towers that you expect to be able to easily see when on the deck. This vertical feature does not have to be the IP… it only needs to be close enough so that you can easily find the IP.

For this article, I’m going to use a map that I had when flying Hogs in England. We used to make up practice scenarios and would fly simulated attacks from them. One of my favorites was west of Bentwaters and had some nice terrain features to work with. The following map is the exact map I used. There were real life areas that we had to avoid (such as airfields and little old ladies that didn’t like jet noise). I colored these red and designated them as SAM avoidance areas or friendly no-fly zones, etc. On this map, you will see two IP’s (Bravo 601 and 602). B601 is a 200’ tower on the top of a hill, and B602 is an old WW2 airfield (Market Harborough). The CP is another WW2 airfield, Bruntingthorpe. Our jets had an inertial navigation system (INS), and so I included an INS update point (a small lake) that we would fly over enroute from the CP to either IP. The target in real life was a bridge, but for our scenario purposes, it could be anything we wanted. The large red circles to the east of the target (RAF airfield no-fly zones) represented enemy SAM rings, and the smaller red circles to the west of the IPs represented friendly no-fly zones.

To get an idea of the scale of this map. Look at the vertical grid lines. Those tick marks are one nm in length (6000’)… so for a typical line formation, an A-10 flight would be one tick mark apart or less. 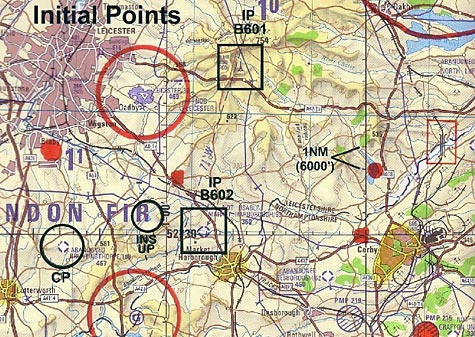 Ok… back to the map study. Next, check the terrain between the IP and the target. Plan an ingress route that follows the terrain… your game plan is to keep that terrain between you and the target as long as possible. That means you may not fly a straight line from the IP to the target. In fact, if you use terrain wisely, it’s a good bet that this will be the case. Your heading plot to the target only gives you a general bearing to fly… it’s your use of the intervening terrain that will often spell success or failure when it comes to the element of surprise.

Now, with the map features in mind, consider the type of attack formation and tactic that is best suited for your specific circumstances. Begin this assessment by looking at the target itself and the anticipated threat. The nature of the target will determine whether you fly a simultaneous or sequenced attack and will also determine the shooter and cover roles for the flight. If the target is a unitary object and is heavily defended (like a bridge), then you might choose a shooter/cover, one pass/haul ass attack. On the other hand, if the target is made up of numerous objects that are lightly defended (such as a truck convoy), then you might consider a simultaneous shooter/shooter attack.

With the general game plan in mind, now reference the map for “action points”… these will be readily recognizable features that you will use to transition from the low altitude ingress to the actual weapons delivery pass. It is the point that you typically “unmask” to begin the weapons release run in. Depending on attack delivery, this will either be the “bump” point (for gun and maverick attacks) or the “pop-up” point for dive bomb attacks. This action point varies with type of weapon and may be as close as 2nm for a gun attack to 5nm for a maverick bump. If no terrain feature is available, then plan a back-up time to fly from the IP to the action point… but this should be considered a poor second choice since timing can go bad in the heat of the moment.

Let’s look at our UK scenario map again. The rising terrain east of IP B601 is a good 5nm action point, and the powerline/road intersection east of IP B602 should be easily recognizable as well. 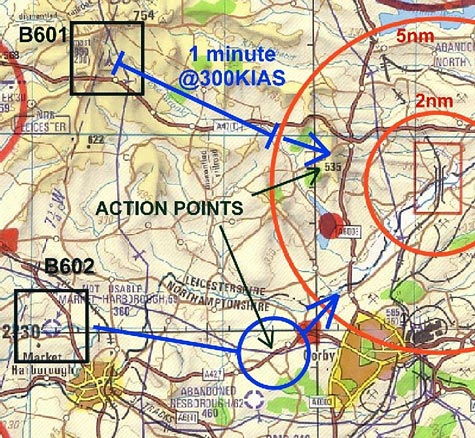 Action Points
(click on the above for the full screen image)

Finally, plan your egress. Don’t be predictable…going out the same way you came in is not nearly as good as having a different egress route that uses terrain to hide behind. This is where having more than one IP comes in handy…you ingress from one and egress to the other. With these ideas in mind, let’s move on to the actual attacks themselves.