The third primary attack formation is the split.

Bomb attacks present a weapons frag problem that we didn’t have to be too concerned about before. In a gun or Maverick attack, we do not overfly the target as a rule…these are “stand-off” weapons. When making a bomb attack, however, you will usually overfly the target (the exception is a loft or “toss” attack). When we attack a target in pairs, we have to be concerned about our weapon frag pattern. Typical frag patterns for a single weapon have a radius of 3000’ and a height of at least 1000’. Time is also a consideration…we think of a frag pattern as having a duration of about 30 seconds.

With these numbers in mind, we can see that a typical line or wedge formation spacing might endanger one of the flight members. We get around this frag problem by increasing the spacing between the flight members…we do this by “splitting” the flight to increase their separation, hence the name, “split attack”.

Besides solving the frag problem, the sequential attack is also useful for dividing the enemy’s attention during the weapons release phase. By increasing the distance between the flight members, we make it harder for the enemy to bring them both under simultaneous fire. Regardless of objective…frag separation or deception…the way to achieve a sequenced attack is to employ split tactics.

The split attack is begun from line or wedge formation. The flight ingresses in either formation…the “split” is done at the action point. This action point is not the same as the one previously mentioned…this “split” action point is located at a greater distance from the target. Splits require considerable pre-attack planning and are best used when specifically briefed before hand. Here are some typical split attacks.

The single split attack is often flown from a wedge formation. In this attack, the lead attacker makes a direct approach to the target while the wingman splits at the action point. The wingman’s change in heading is the primary mechanism for achieving the time and lateral separation. In general, the further out the action point, the fewer degrees of heading change required. A 30-45 degree heading change that is maintained for about 30 seconds should be sufficient to give the wingman a minimum of 30 seconds spacing over the target.

After the first attacker has made his post-release breakaway maneuver, he should turn to acquire a visual on the second attacker. In doing so, he can provide a measure of mutual support. As the second attacker comes off his attack, the first attacker is in a good position to direct the other’s egress heading and get the flight back into mutual support. Looking at our scenario map, we see the wingman splitting off to the south. In this drawing, if the flight was dropping bombs, their flight path lines would extend all the way to the target…as it stands, I think you get the idea. 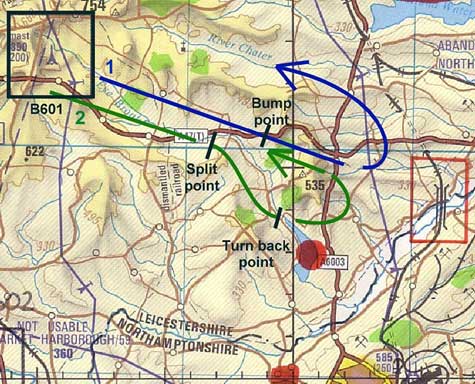 The double split is often flown from a line attack formation. In this split, both attackers turn away from each other for about a 30-45 degree heading change. They hold the new heading for approximately 30 seconds and then turn back into the target to set up their attack bump or pop-up. This technique achieves more of a lateral separation than time…but is suitable for providing the necessary lateral frag separation as long as the attackers do not attack targets on each other’s side of the target area.

In the pull-off, the attackers may turn inward or out, depending on the threat. An inward turn may allow the attackers to regain a mutually supportive formation alignment sooner and is useful in low visibility situations. In a high threat environment, the turn away may be more appropriate. In this case, it is important that each flight member follow the briefed egress plan in order to regain sight of each other. Going again to our map, we see the flight members departing the north IP. The lead splits north and ingresses down the flat valley while the wingie splits south and uses the rising terrain to mask his approach. When they both climb up for their individual attacks, their attack axes are almost 90 apart, thereby forcing the bad guys to split their defense. 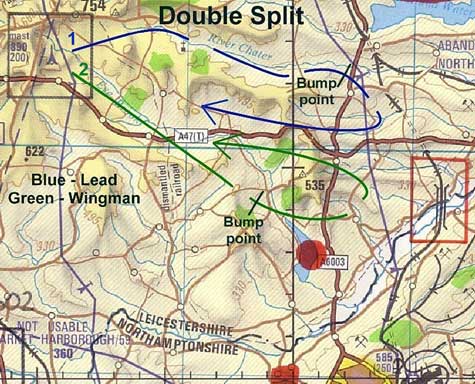 Another term for the trail split is “B’nai”…this word comes from an Israeli name for a type of trailing attack. The trail split is often flown out of wedge. This technique is particularly useful in rising terrain. The idea is that the wingman is free to take spacing at the action point. Exact headings and times are not specified. The lead essentially bores in on the target while the wingie maneuvers into a trailing position. The emphasis in this position is on time, not actual position off of lead. It is not necessary for the wingie to be behind the leader. Instead, the wingie is tasked with maintaining a visual on the lead in order to provide mutual support…and he must achieve about 30 seconds of separation over the target. Ideally, the wingman should strive to turn back towards the target and begin his run-in about the time the leader unmasks.

In our map scenario, the wingie uses an “S” turn to get the needed spacing. No matter. The wingie does what is needed to get his spacing. 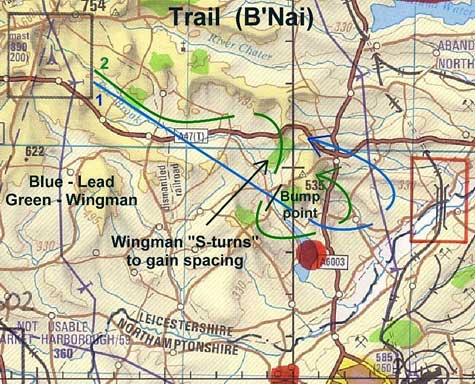 In the B’nai egress, the leader makes a hard initial turn away from the wingman’s attack direction. The lead is looking to make a turn of about 270 degrees and should be in the final portion of that turn as the wingie pulls off the target. As the wingman breaks away, the lead is in a good position to quickly regain a supporting formation position.