No discussion of CAS would be complete without a mention of the role that FACs play. There are a number of types of FACs… let’s just stick with the traditional airborne or ground FAC that is supporting friendly ground forces.

Regardless of whether the FAC is in an aircraft or in a jeep on the ground… his mission is the same… provide you with the info needed to get iron on to the bad guy’s heads. As you might imagine, communications are the linchpin of FAC operations…

if the FAC cannot talk to you, his participation is nullified. In real life, we use a variety of methods to ensure the success of pilot-to-FAC communications. These include secure radios (Have Quick), brevity code techniques, and authentication devices.

Let’s assume that comm is not a problem… and move right into the nitty-gritty. We’ll start with the FAC himself. Typically, he will be a fighter pilot on special assignment as a FAC. If not, he certainly has been schooled in fighter operations. More to the point, the FAC you encounter over the bad guys is most likely someone who has “been there and done that”. He has to have his sierra in a tight little bag because a lot of folks (including you) are going to have their lives in his hands when the bombs start falling.

When you arrive in the general area of the target, you should go to the contact point (CP) and do just that…contact the FAC. This is called the “fighter check in”. Your message to him is very simple…what you are, how many of you there are, what you are loaded with, and how much time you have before you must return to base (playtime).

3. Number and type of aircraft

4. Ordnance and fuzing (for a single aircraft)

“Cobra 20 is inbound with two Hogs, two Mavericks and four CBU-58, and we’ve got 30 minutes playtime.”

His initial response will be to give you the target area basic info:

The abort code is often based on a common letter-based authentication system. The system works this way. A table of letter combinations is published daily. Each participant has a coding device to decipher the code. One party gives the other a two letter combination such as:

“Lima Bravo” (the names for the letters L and B).

The other party looks up that combination on their coding device…the resulting decode will come out as a single letter. That party will then answer with that letter:

”I authenticate Charlie” (the letter C).

The FAC will give the abort code as the first two letters…the fighters will then look up the proper one letter decode…that single letter will be used by the FAC if he has to order the fighters to abort (break off the attack). In this manner, no one acknowledges the abort code until it is actually used.

Often, the FAC will want to give the fighters a vector to allow them to join up with him before the attacks begin. This is the “rendezvous” part of his initial message. An important part of the rendezvous instructions are the deconfliction rules… the FAC will tell the fighter leader an altitude not to go below so that the FAC and fighters are separated in the case that they do not initially see each other.

In the intel update and altimeter part of his initial call, the FAC gives the fighters any pertinent info regarding the target area defenses as well as the local altimeter setting to be used for bombing deliveries.

With these pleasantries out of the way…and with the fighters ready to receive their specific instructions… the FAC prepares his briefing for the fighters. This is called the “Nine Line Brief” as it consists of nine items. The fighters will be holding at the contact point when this info is given.

2. Heading to the target

3. Distance to the target

7. How the target may be marked (smoke, laser TISL code)

The thing to remember is that this war stuff is serious business! Now is not the time for someone trying to be cool! For example, lets imagine a 9-line that sounded like this:

Then imagine yourself at low altitude trying to fly a holding pattern while checking your buddie’s six… and copying this info. Doesn’t say much, does it? When it comes to giving a 9-line brief, the FAC wants to be brief… but he doesn’t want to be cryptic! With just a few more words, he can make the radio call much easier to understand:

Which one would you rather receive?

In addition to the nine items, the FAC may want to add some remarks. These include known threats, run-in restrictions, clearance rules, winds, and best bail out areas. Run-in restrictions are particularly important…the standard rule is that the fighters will not overfly friendlies on their attack runs (this is to prevent short rounds). If this is a factor, the FAC will specify that attack headings must comply with certain restrictions… such as:

“Make all attacks from the south to the north, avoid overflying friendlies in town to the east”.

As for clearance rules, the FAC may authorize the fighters to begin their attacks once they reach the target area…or he may direct that each flight member will need to get an individual clearance. The FAC may also tell the fighters his location… he’ll set up an orbit close enough to be able to monitor the target and also removed from the attack direction of the fighters.

Looking at our map again, we see the FAC in an orbit to the west of the lake and the friendly line of troops between the lake and the town. In a situation such as this, the FAC may direct the fighters to use the north IP, make their attacks no further south than the ridge line west of the target, and egress with a pull off to the north. 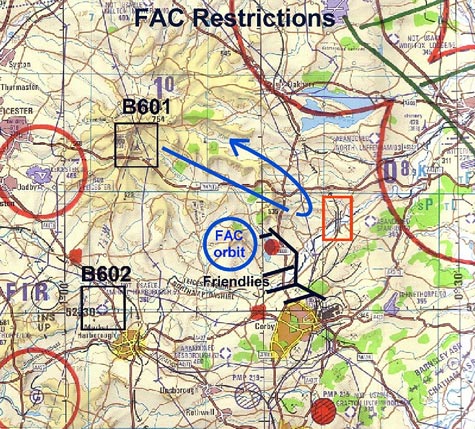 FAC Restrictions
(click on the above for the full screen image)

Sometimes the FAC may want to mark the target with a smoke rocket…this is helpful if the bad guys are hunkered down in the trees and are hard to see. The FAC needs time to set up for his pass, so he’ll tell the fighters to give him a “head’s up” as they approach the target. Often this is a 30 second call (the fighters are 30 seconds out from the initiation of their attack runs). In this case, the FAC will add the remark…

In LOMAC, you will be able to mark targets with smoke rockets. Here’s a shot of a FAC in for his mark. 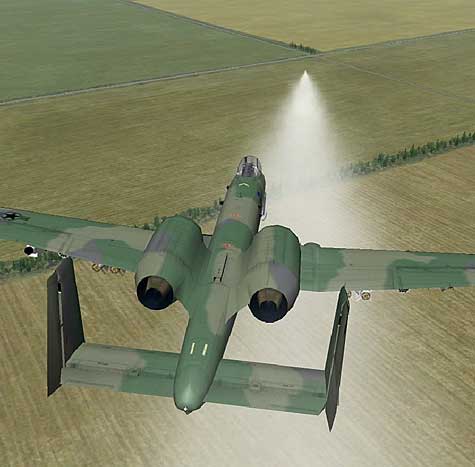 The Pave Penny laser identification system may be used to mark the target as well. In this case, the FAC will pass the numerical laser code for the pilot to put into his TISL panel in the Hog. LOMAC will have a TISL diamond in the game, but it will programmed in your initial mission planning when you set up your target locations. In the sim, the idea is that the laser spot is being provided by friendly ground forces. Use the TISL as an acquisition aid…not as a firing reference in most cases. 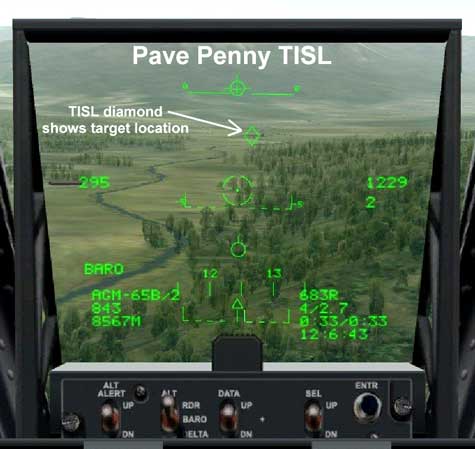 Ok! Now we’re ready to get to work! Copy the 9-line while you are holding at the CP. If in a bone, do it when wings level, not in the turns if possible. Write the data down on your kneepad… in real life, we often wrote this data on the side of the cockpit canopy with a grease pencil!