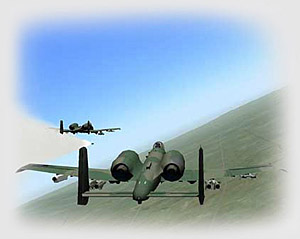 Now the stage is set for the attack. Once the fighter lead acknowledges the briefing, the FAC will tell him to call departing the IP. The FAC computes the IP-to-target flight time and maneuvers to be in position for a rocket marking pass if needed. He flys away from the fighter attack axis but close enough so that he can see that the fighters are attacking the correct target. His last call to the fighters is “call departing”.

The fighter lead then calls “departing” when he leaves the IP and begins his ingress. If needed, he’ll make a heads-up call to the FAC as he approaches his action point.

From now on, the flight members including the FAC fly their respective roles. If needed, the FAC turns towards the target and fires a marking rocket at the enemy position.

He then tells the attackers to aim relative to the location of his mark… such as:

Of course, most FACs will want to nail the target with their rocket… in this case, they’ll tell the fighters to “Hit my smoke”!! But the important thing is not that the FAC hit the target, but that he gets close enough so that the mark can be used as a reference. In a high threat area, the FAC may well use a loft delivery when firing the rocket… if so, the rocket will impact only in the general area of the target. Notice the tree line and road orientation in the next picture. The FAC may make things easier by designating a ground reference as oriented in a general direction… then he can make corrections off of that reference. For example, in the picture below, the FAC can tell the attacking flight to consider the road to be running north and south. He then makes all of his follow-on corrections using that reference. Using the rocket smoke as a starting point, he can direct where he wants the ordnance to go… such as:

“West” means a 90 degree direction relative to the road… not the aircraft heading indicator. 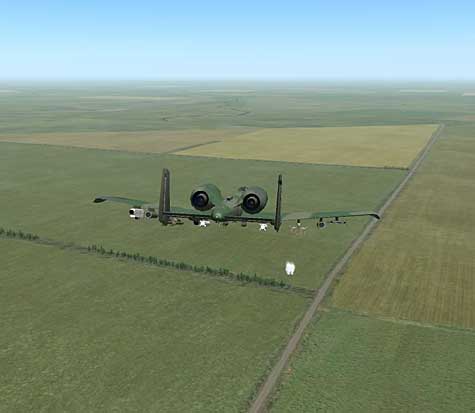 Rocket Smoke
(click on the above for the full screen image)

The fighters will call in on their attacks:

He may also add whether or not the FAC is in sight. The FAC then answers:

This means that the leader is authorized to release his weapon. If the FAC does not want the fighter to expend weapons for any reason, he’ll most likely just say “Continue” …and then use the abort code to order the fighter to break off the attack if needed… otherwise, he adds “Cleared, One” when he can see that the pilot is aimed in the proper direction.

The FAC will use the attacker’s weapons impact location to cue the next attacker:

“Shack” is the fighter pilot’s term for “Bulls-eye”!!

Depending on target damage and playtime and ordnance remaining, the FAC may halt the attacks and brief a new target.

At some point, the fighters will be out of ammo or fuel…it will be “bingo” time. They will advise the FAC that they are leaving, and he then will give them their target results.

This is known as the “BDA” report… BDA stands for battle damage assessment. The FAC will give the fighters their time on target (TOT), the target coordinates, weapons delivery results in percentage of hits and targets destroyed, and any observed duds (weapons that did not explode). It might sound like:

As the fighters climb up for their flight back to base, the FAC will communicate with the local friendly ground commander to get his observations and then radio the central ground forces headquarters to give the mission results. This in turn will generate the need for additional missions to that target area if needed.