Ahead of us, two British Tornadoes, carrying ALARM anti-radar missiles, are aloft and heading for target. They will suppress the Sheik’s minions while I dash for target, and Col. Martin observes me. 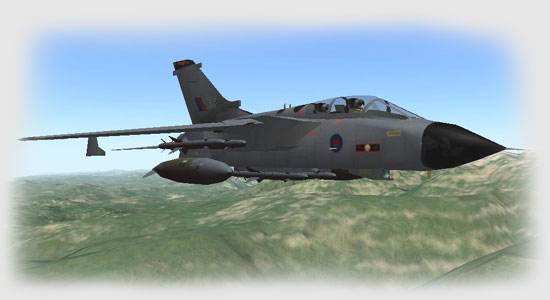 I firewall the throttles and the big fans spool up.

“Two, rolling.” Col. Martin is right with me, pulling his A-10 off the runway first. I hold the nose down to ensure I have plenty of speed, then gently rotate my 727 off the runway, pulling up gear and sliding into position over the railroad tracks leading out of Adler, heading south at 300 feet.

“Thank you. This craft is marvelous to fly!”

And it is! It does not wallow like hog at all! Your A-10 has wonderful pilot aids. It is so easy to navigate — just line up the marks on the HUD. It is like Su-27 or MiG-29, almost. Much easier to master than Su-25, in which I trained. We skim along, just three to four hundred feet high, following the railroad line. We sweep over a train, and a fire truck motoring slowly along the Adler-Gudauta highway. Unlike the last mission to Sukhumi, there is minimal turbulence.

I have binoculars in my pilot bag. Six miles ahead, and two thousand feet high, are the British. They have good vantage and can see much. My AN/ALR-69 RWR reciever is beeping the signals of Shilka vehicles and the Tarantul’s radar. As we close, cruiser Moskva is busy, though. She is pounding the tiny harbor with Bazalt missiles. Muqtadeh’s Tarantul missile corvette has impudently challenged Moskva with a Kh-41 missile, which the cruiser easily downed with SA-N-6. Now, the Sheikh’s men will pay. Three P-500 missiles slam into the waterfront as the British, high above, watch. One, into a tanker come with unknown chemicals. It was our secondary target! Two more, into the missile-boat.