A Lock On: Modern Air Combat Air to Air Mission

I must be…what is your word, tovarisch…melodramatic now, no? I am Sacha Dimitrova Andreevna, but you, my friends, you may call me Sacha. Vasily, my section-mate…wingman, in your tongue? He and I have had many adventures in my country’s fight against the Sheik. You have heard of him, no? He is a most evil man. The Sheikh Sheikh Muqtadeh al Sadr ibn Sistani leads the Islamic Liberation Resistance Front. And he has the help of the Turks, who have their eyes on our southern flank. It is Georgia the Turk covets, for it is small. But not helpless!

I have had a small part in our war in the East. You too know the war on terrorism. Here, we have lived with the threat for long and long. It started when our Soviet Union was lost in Afghanistan, and later with the Chechens, where the war goes on still. And now, in Georgia. The wily Turk moves east while our back is turned to Chechnya, and the Americans their allies are busy in the Iraq, and Afghanistan too-they know America and the U.N. would not let them do this.

The world is coming to help us now, but only slowly, for the war is a vast one. We must help ourselves. For now, America sends its E-3 AWACS to be our eyes, and that is enough. Later, we are told a squadron of your F-15 fighters will come, and I am to go to help them in our country! This is so because I am fortunate to have been to your “Red Flag,” and have trained with your U.S. Air Force.

They too are great warriors. But that is another story for another time. Soon, the Canadians, and the Germans, and other nations will fly here to put a stop to the Sheik’s madness. Only together may this war be won.

For today, the Turk tries to stir up trouble over the Black Sea. He is the Sheik’s eyes. His hated F-4 fighters have been regularly violating the airspace of our brotherly Georgian neighbor, who have no air force of their own. Today, however, our 586 Fighter Interceptor Squadron is in-theater. It is a most glorious squadron, and the Turk does not know this. He will learn. We will teach him. In the Great Patriotic War, it was composed of all women! But now, it is… your term is “co-ed?” My wingman, Vasily, is more skilled than I. I blush to be called section leader. But our task is air to air combat in the 586th, and this is my training. Vasily came to us from the ground-attack unit. We are based at the Adler airfield, in the city of Sochi on the Georgian coast. From Sochi base, we can see the beautiful Black Sea, which you will soon come to know, when your countries send you to fight with us soon.

This day we are assigned Ground Alert duty, which means idling at the end of Adler Runway 15 waiting for the action. Early this morning, Vasily and I met with our Commander, who briefed us on the mission. You know what that is. We will wait, and when the American AWACS, code name Overlord, sees the daily insult to our brothers, we will smartly slap the Turkish dog on the nose. I have the choice of loadout for this mission. Vasily and I meet with the Armourer, and I ask for two R-27EA, two R-27RE, two R-27TE, two R-73, and the Sorbtsiya jammer pods. The EA is the only active radar missile that our beloved Su-27P can carry, though a modification to the N-001 radar is posited to allow R-77 carriage. This has not reached the front yet. Be sure that it will, and we will be stronger still when it does. 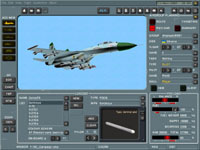 We carry TE and RE to fire in pairs at the proper range. The TE will sneak up on the Turk, while he is trying to evade the semi-active radar missile. His F-4, unlike the despised F-16C the West has given him, has no AMRAAM. We rejoice at this, for it makes our task easier.

We saw the meteo officer later, before the GAZ jeep came to take us to the flight line. He poured glasses of tea, as is his custom, and I munched on cucumber slices as he briefed us.

“Expect clear air turbulence today, Sacha. Winds are unpredictable at all altitudes, but the temperature is expected 20 degrees at sea level. It will be a nice, breezy day for you to enjoy at the end of the runway!” He laughs at his little joke. Vasily pulls a face at that.

“We will roast in those Nomex suits.”

“You are thin enough, Sacha.” Vasily shook his head. “You will blow away as soon as you open your canopy.”